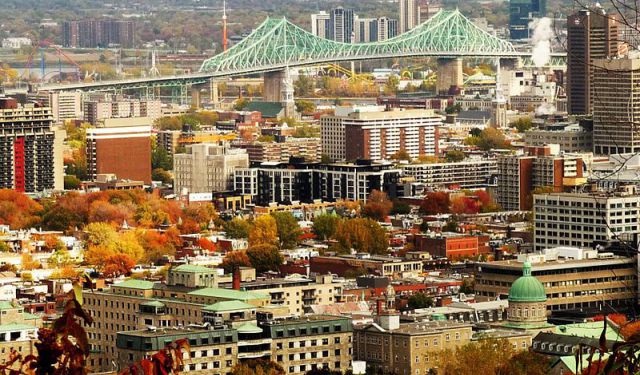 Image by DubyDub2009 on Wikimedia under Creative Commons License.

One of the loveliest districts in Montreal is Le Plateau-Mont-Royal, with its superb architecture, wide sidewalks and almost European feeling about it. Exploring the shops and galleries along Boulevard Saint Laurent will heighten this impression, as there is a happy mix of French-speaking and English-speaking residents.

It’s almost enough just to wander around the neighborhood admiring the different buildings, from brightly painted Victorian style houses to traditional brick built edifices with exterior stairways. The Plateau has a host of bookstores selling both new and secondhand books, sidewalk cafes and excellent food stores: you will find the best Montreal-style smoked meat here. There are also up-market clothes stores, old-fashioned pubs and trendy nightclubs.

Due to traffic control projects you will find a lot of “Ruelles Vertes” (Green alleys) where residents have re-naturalized the streets, which adds to the charm of the area and makes it seem almost like a country village in the heart of Montreal. Relax in St Louis Square Park which has a beautiful Victorian fountain; have a good meal a restaurant in the pedestrian part of Prince Arthur Street where street artists put on impromptu shows.
How it works: A discovery walk features a route using which you can explore a popular city neighborhood on your own. This walk, along with other self-guided walks in over 1,000 cities, can be found on the app "GPSmyCity: Walks in 1K+ Cities" which can be downloaded from iTunes App Store or Google Play to your mobile phone or tablet. The app's built-in GPS navigation functions allow following this walk route with ease. The app works both online and offline, so no data plan is needed when traveling abroad.