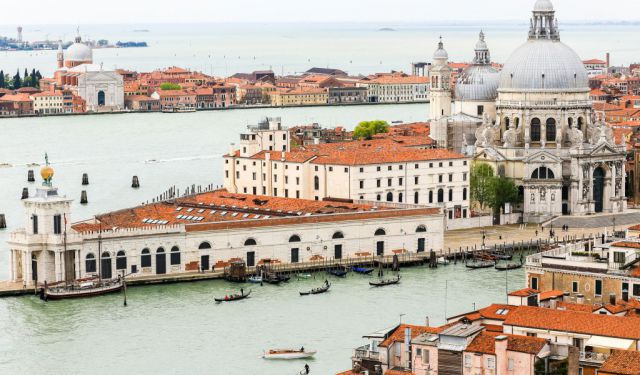 Within the San Polo district are some of Venice's most famous sights. Among them is the Rialto Bridge, one of four bridges that spans the Grand Canal and its oldest crossing. In fact, this is the oldest part of the city and a walk through the labyrinth of narrow lanes will reward you with ancient buildings, and cafés that have been in families for generations. Make a point of going to San Giacomo di Rialto, which some believe is the oldest church in Venice. According to local lore it was consecrated in the 5th century, although the building you see today dates back to the 16th and 17th centuries. Nearby is one of the most popular attractions in this part of the city, the Rialto fish market where you can purchase fresh fish and shellfish that have been plucked from the Adriatic Sea and the Venetian Lagoon. There's more shopping in the neighboring streets where you'll find bakeries, wine shops and florists among other enterprises. As you tour the area, pause to look over the Grand Canal and the many passing gondolas.

Visit some of the lesser known parts of the district, such as Carampane, often frequented by Casanova. This is the old red light district with the famous Ponte delle Tette. The name of this crossing translates as the “Bridge of Tits”. Apparently it earned the sobriquet because prostitutes used to try and drum up trade by flashing their breasts from brothel windows that overlooked the bridge. Stay in the district for a delicious meal. San Polo restaurants are renowned for serving up some of the best food in the canal city.
Image Courtesy of Flickr and Edward Reynolds.
How it works: A discovery walk features a route using which you can explore a popular city neighborhood on your own. This walk, along with other self-guided walks in over 1,000 cities, can be found on the app "GPSmyCity: Walks in 1K+ Cities" which can be downloaded from iTunes App Store or Google Play to your mobile phone or tablet. The app's built-in GPS navigation functions allow following this walk route with ease. The app works both online and offline, so no data plan is needed when traveling abroad.