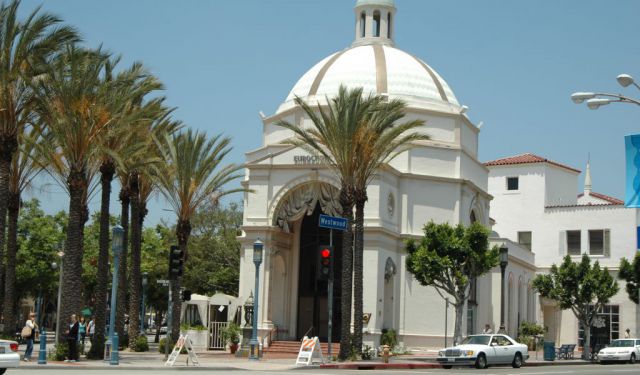 Image by Sergey Galyonkin on Flickr under Creative Commons License.

Westwood is a beautiful residential and commercial neighborhood situated close to Beverly Hills that is popular with locals and visitors alike. Within its boundaries is Holmby Hills, one of LA's wealthiest residential areas.

Westwood is much admired for its architecturally important buildings, such as vintage theaters. They include the Art Deco Crest and the Mann Village with its landmark 170-feet white tower. Among the other buildings of note are the Playboy Mansion, home of Playboy founder Hugh Hefner, and buildings that were constructed in the 1940s and the 1950s. Their architectural styles include American Colonial Revival, Mediterranean, French Regency and Classical Revival. Other attractions include the UCLA campus and Westwood Village.

This is a premier entertainment and dining destination with lots of high quality shops, restaurants and cinemas, including vintage motion picture houses. There are also numerous events presented here throughout the year, such as movie premieres, farmers' markets and improv shows.

During your time in the Westwood locale, stop by Westwood Village Memorial Park Cemetery and the Hammer Museum. This art museum and cultural center host temporary art exhibitions and has a permanent collection that includes international contemporary art from 1960 onwards, and drawings and paintings by 19th-century French satirist Honoré Daumier.
How it works: A discovery walk features a route using which you can explore a popular city neighborhood on your own. This walk, along with other self-guided walks in over 1,000 cities, can be found on the app "GPSmyCity: Walks in 1K+ Cities" which can be downloaded from iTunes App Store or Google Play to your mobile phone or tablet. The app's built-in GPS navigation functions allow following this walk route with ease. The app works both online and offline, so no data plan is needed when traveling abroad.