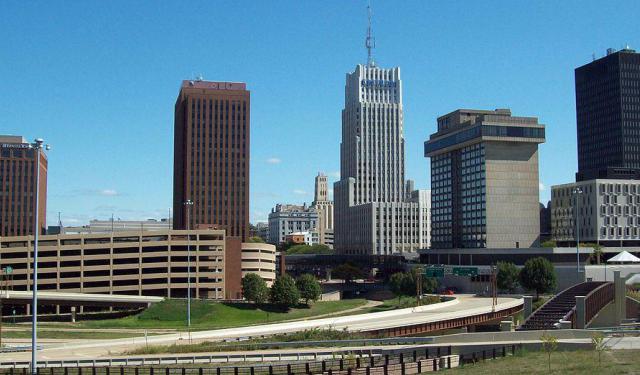 Akron, Ohio takes pride in a number of historic and cultural attractions found in the city. Among the most notable of them is the Akron Art Museum, showcasing modern artworks including pop art and photographs, housed in a 19th century building with an ultra-modern glass and steel addition. If you want to know more about Akron, its dramatic past and eventful present, take this orientation walk and find out!
Image Courtesy of Wikimedia and Sleepydre.
How it works: Download the app "GPSmyCity: Walks in 1K+ Cities" from iTunes App Store or Google Play to your mobile phone or tablet. The app turns your mobile device into a personal tour guide and its built-in GPS navigation functions guide you from one tour stop to next. The app works offline, so no data plan is needed when traveling abroad.

The Akron Art Museum first opened its doors on February 1, 1922 as the Akron Art Institute and was located in two borrowed rooms in the basement of the public library. The Institute has grown considerably since that time. The new museum opened to the public on July 17, 2007 and nowadays it features 20,000 square feet (1,900 m2) of gallery space dedicated to the display of its collection of art produced since 1850 and it hosts visiting shows from national and international collections. Western art created between 1850 and 1950 graces the first floor of the museum’s 1899 Italian Renaissance revival style building. Art since 1950 is featured in eight rooms located in the museum’s 2007 Knight building.

Image Courtesy of Wikimedia and Threeblur0.
Sight description based on Wikipedia.
2

The original church was built in 1861, on the current site of the National Inventor's Hall of Fame S.T.E.M. school. The current church building was begun in 1902, and opened in 1905. St. Bernard Church was added to the National Register of Historic Places in 1989. This wonderful building was designed in German-Romanesque architectural style with a Baroque influence. It is characterized by monochromatic stone, many arches and twin bell towers, thus resembling imposing European cathedrals. The church's interior is also noteworthy for its marble altar, wall decorations and pictures.
Image Courtesy of Flickr and bjebie.
Sight description based on Wikipedia.
3

Akron Police Museum presents a very interesting forum for those who wish to know more about the Police Department of Ohio, its history, activity and development from its inception until the present. The permanent collections present police uniforms and equipments, weapons, old photos, awards and many different confiscated items. Outside the building is the Police memorial, dedicated to officers who have given their lives for the country.
Image Courtesy of Wikimedia and Threeblur0.
4

Built in 1929, the Akron Civic Theatre has been a significant part of Akron's history ever since and it is considered one of the most important cultural landmarks of the city. The interior of the theater is designed to look like a Moorish Castle with Mediterranean decor, complete with medieval style carvings, authentic European antiques and Italian alabaster sculptures. The theater is known as an atmospheric theater, where customers can experience sitting under a star-lit sky and clouds that appear to move across the horizon. Located on Akron’s South Main Street, the theater’s entrance lobby extends over the Ohio and Erie Canal. The theater has a small multi-colored terra cotta façade dominated by a large marquee. A grand full-sized organ hidden beneath the stage rises to the stage level on a special elevator.

An excellent example of the great movie palaces of the 1920s, the Akron Civic Theatre is the last remaining theater of 11 opened by the famous architect Marcus Loew, founder of the Loew's theater chain. The Civic is located on South Main Street in Akron, Ohio and seats approximately 4,000 people. The theater has been putting on shows and special events for about 85 years.

Image Courtesy of Flickr and reynolds.james.e.
Sight description based on Wikipedia.
5

Lock 3 Live! is a valuable cultural and entertainment landmark of the city. It is not only a little cozy park where one can relax and enjoy the panorama of the city, but it is also a place where many important events happen. Different concerts and performances, markets and exhibitions are organized here, as well as the installation of the largest ice skating rink in the winter time.
Image Courtesy of Wikimedia and Threeblur0.
6

Glendale Cemetery is a cemetery and historic district located in Akron and was founded in 1839 by Dr. J.D. Commins. It was added to the National Register of Historic Places in 2001. Here statues of prominent citizens, an avenue of stately mausoleums and a collection of headstones tell the story of Akron’s past. Originally known as Akron Rural Cemetery, Commins modeled the design of the cemetery after Boston’s Mount Auburn Cemetery, which he visited in 1838. Glendale is a picturesque romantic landscape with its curving roads, use of promontories to create vistas and a variety of architectural styles that draw upon ancient building forms. Mausoleums are modeled after Egyptian, Greek and Roman temples or Gothic churches.

Distinct sections of the cemetery are devoted to the Masons, Akron’s Jewish community and infants and children. The Civil War is prominently commemorated in Glendale Cemetery. The Buckley Post of the Union Army has a large memorial marker surrounded by 50 headstones located on the northern plateau. The 1876 Gothic Revival style Memorial Chapel was constructed by the Buckley Post and has been recently restored.
Opening hours: Monday - Sunday: 8:30 am - 5 pm

Image Courtesy of Wikimedia and Nyttend.
Sight description based on Wikipedia.
7

The Home of John Brown is a historical landmark that offers the possibility to learn more about the life and activity of one of the most important figures in the anti-slavery movement, John Brown. He lived in this house from 1844 to 1854 and as a tribute to his big contribution in the abolition of slavery, Summit County Historical Society opened his house as an exhibit, where besides his room and personal belongings, documentation and photographs are preserved.
Image Courtesy of Wikimedia and Panzer.
8

The Akron Zoo is a 50 acres non-profit zoo located just west of downtown in Akron. The Akron Zoo is home to over 700 animals representing over 90 different species and it has over 1 million visitors annually. The animal exhibits are divided into six different themed areas containing animals from different regions of the world. The zoo is the most visited attraction in Summit County and rated in the top 10% of all zoos and aquariums in the United States. In May, 2005 the zoo opened their largest expansion in their history, Legends of the Wild. This area features 16 animal exhibits, over 20 animal species and over 400 total animals, including snow leopards, jaguars, lemurs, bats and many more.

Create Your Own Walk in Akron

Creating your own self-guided walk in Akron is easy and fun. Choose the city attractions that you want to see and a walk route map will be created just for you. You can even set your hotel as the start point of the walk.

Akron has room for many different congregations, thus followers of every religion can find their place in the city, be it a Methodist, Lutheran, Catholic or Presbyterian church. Take this tour and discover the historical religious venues of Akron.