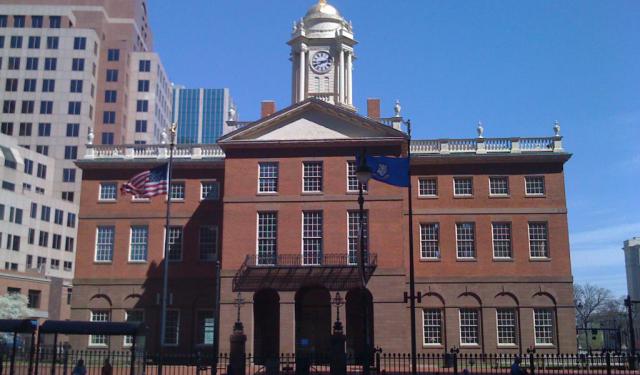 Image by dbking on Flickr under Creative Commons License.

Architectural Buildings in Hartford Self Guided Tour (Self Guided), Hartford

Hartford is a magnificent city because of its unusual new and old architectural buildings. The first part of the guide will show you the most famous structures in the center of the city. Take this self-guided tour to explore the most important historical and architectural buildings in Hartford.
How it works: Download the app "GPSmyCity: Walks in 1K+ Cities" from iTunes App Store or Google Play to your mobile phone or tablet. The app turns your mobile device into a personal tour guide and its built-in GPS navigation functions guide you from one tour stop to next. The app works offline, so no data plan is needed when traveling abroad.

Armsmear ("meadow of arms"), also known as the Samuel Colt Home. It was the family home of firearm manufacturer Samuel Colt and is now a National Historic Landmark. Armsmear was planned for Colt's 1856 marriage to Elizabeth Hart Jarvis, and constructed in 1856 to designs by an unknown architect. It was described by a contemporary thus: "an Italian villa in stone, massive, noble, refined, yet not carrying out any decided principle of architecture, it is like its originator, bold and unusual in its combinations." It features a low-pitched roof, heavy bracketed cornice, round-arched doors and windows, iron balconies, Italianate tower and details, and Turkish domes and pinnacles.

The Colts occupied Armsmear in 1857 and promptly began to develop its gardens. Landscape architects Cleveland and Copeland provided the plans. Unusual, glass-domed conservatories, inspired by London's Crystal Palace, were added in 1861-1862. Ultimately the estate contained some 2,600 feet (790 m) of greenhouses, as well as ponds, fountains, and a deer park. After Elizabeth Colt died in 1905, the house was converted to a home for Episcopalian women (in 1911) under the terms of her will. She also gave 140 acres (57 ha) of Armsmear's grounds to create Hartford's Colt Park. The city has subsequently replaced the greenhouse, garden, and ponds with ball fields and a skating rink.

Image by Robert Fulton III on Wikimedia under Creative Commons License.
Sight description based on wikipedia
2

Henry Barnard House in Hartford was the home of educator Henry Barnard. Barnard was instrumental (along with Horace Mann) in the development of the American public school system. This plain and tall, three-story brick building has a gable roof and an ionic-columned portico. It was built four years before Barnard was born. It was declared a National Historic Landmark in 1965. The house is currently owned and operated by Mercy Housing Connecticut, a homeless shelter.

Image by Dmadeo on Wikimedia under Creative Commons License.
Sight description based on wikipedia
3

The Second Church of Christ is located on the Main Street, not far from the Charter Oak Cultural Center. The church was built in 1825 by architect Minard Lafever. He beautifully represented Greek Revival architecture through the four ionic columns in front of the structure. The tower is decorated by a big watch that makes the exterior design more remarkable. Since 1978, the Second Church of Christ is considered a national and historic site of Hartford.
Image by cliff1066™ on Flickr under Creative Commons License.
4

The Charter Oak Cultural Center is also considered the Temple Beth Israel because it houses the Jewish synagogue. It was built in 1876 by architect George Keller. The building represents the High Victorian eclectic style of architecture. The exterior design is remarkable - the two main entrances are placed next to each other and decorated by two small arches; the windows follow the same design. The Charter Oak Cultural Center is a multicultural and educational center that allows access to different kinds of art.
Image by Vietjohn Tran on Flickr under Creative Commons License.
5

The Phoenix Mutual Life Insurance Building, locally called the "Boat Building", is a notable modernist office premises located on Constitution Plaza in Hartford. It is listed on the National Register of Historic Places and is the world's first two-sided building. It was designed by architect Max Abramovitz of Harrison & Abramovitz. The contractor was George A. Fuller Company. Groundbreaking was in 1961, with construction complete in November 1963.

The 13-story tower has only two curved sides, in an unusual and striking shape variously termed an elliptic lenticular cylinder or lenticular hyperboloid. Its height is 212 feet (65 meters); it measures 225 feet on its long axis, and 87 feet wide at its maximum width. The ends point east and west, with sides facing north and south.

The Constitution Plaza is a large commercial development in the center of Hartford. It is an excellent example of mid-twentieth century commercial design. The entire center consists of three office towers that are the largest in the city. The glass areas have been substituted by other more competent systems that enrich the exterior of the building. The three buildings are connected by large pathways over street bridges. There is also a parking garage with a capacity of 1600 cars.
Image by cliff1066™ on Flickr under Creative Commons License.
8

The Old State House (completed 1796) is generally believed to have been designed by noted American architect Charles Bulfinch as his first public building. The State House has been modified somewhat since it was first built. As originally constructed, the building had neither balustrade or cupola, but the balustrade was added in the early 19th century for the protection of firemen, and the cupola was constructed in 1827 with its bell and John Stanwood's statue of Justice.

An original (1796) stone spiral staircase behind the northern arch, designed by Asher Benjamin, led to the second and third floors; it no longer exists. The building was declared a National Historic Landmark in 1960. It exhibits focus on the history of Hartford and important events in Connecticut history. Visitors can tour the original legislative rooms.

The R. and F. Cheney Building, also known as the Brown Thomson Building, is a commercial building designed by noted American architect H. H. Richardson. It is now on the National Register of Historic Places. The Cheney Building was constructed 1875-1876 for the Cheney Brothers silk manufacturers in Manchester. It was originally a multipurpose structure with five small shops on the ground floor, and offices and apartments above. In 2007 it has been renamed the Richardson Building, and is now a residence hotel, offices, stores, restaurants, and rehearsal space for The Hartford Stage Company.

The building dominates its corner location and, with towers and attic, is various described as containing five, six, or seven stories. Its facade is organized into three heavy, horizontal tiers of roughly cut, reddish brownstone punctuated with much lighter Berea limestone trim. The lowest tier is defined by a series of huge round arches in striking polychrome bands, a motif repeated in the stories above at an increasingly smaller scale. The ground-floor tier on the Main Street facade features five broad arches above shop windows and doors, the second a two-story arcade of 10 major openings, and the third a single-story arcade of 14 openings. The building is crowned with low, asymmetric towers at its Main Street corners. The street corner tower was earlier topped by a pyramidal roof.

City Place I is a highrise skyscraper located at 185 Asylum Street in Hartford. At 163.7 m (537 ft) it is the tallest building in Hartford and in the state of Connecticut. It is only three meters taller than the Travelers Tower, built in 1919. City Place I was designed by Skidmore, Owings & Merrill, and completed in 1980 with 38 above-ground floors. The majority of the building is office space, though there are various restaurant and retail establishments found on the lower floors. The building was sold on April 2, 2012 to CommonWealth REIT, a real estate investment trust based in Newton, Mass for $99 million from the original owner, CityPlace LLC.

Hartford’s museums are pleasantly surprising because of the local history and culture. The uniqueness of this tour is due to the original buildings and unusual exhibits that can be seen there and nowhere else. Take this tour to visit some of the most remarkable museums and art galleries in Hartford.

Hartford is a place where visitors have to explore almost all the streets to see all the historic buildings of the city. Most of them are registered in the U.S. National Register of Historic Places. Take this self-guided tour to admire the most important historic houses in Hartford.