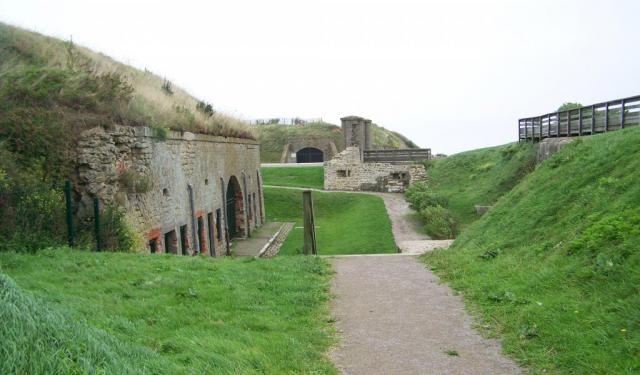 Dover is a small city that is full of beautiful places to visit, like forts, churches and castles. This tour around the city offers a great possibility to visit numerous historical landmarks that relate to the history of the city. Most of them are very old and are preserved very carefully by local authorities. Take this tour and visit one of the most interesting and famous historical landmarks in Dover.
Image Courtesy of Flickr and HBarrison.
How it works: Download the app "GPSmyCity: Walks in 1K+ Cities" from iTunes App Store or Google Play to your mobile phone or tablet. The app turns your mobile device into a personal tour guide and its built-in GPS navigation functions guide you from one tour stop to next. The app works offline, so no data plan is needed when traveling abroad.

Dover Castle is a medieval castle in the town of the same name in the English county of Kent. It was founded in the 12th century and has been described as the "Key to England" due to its defensive significance throughout history. It is the largest castle in England.

Dover Castle is a Scheduled Monument, which means it is a "nationally important" historic building and archaeological site that has been given protection against unauthorized change. It is also a Grade I listed building, and recognized as an internationally important structure. The castle, secret tunnels, and surrounding land are now owned by English Heritage and the site is a major tourist attraction.

The Lord Warden of the Cinque Ports is officially head of the castle, in his conjoint position of Constable of Dover Castle, and the Deputy Constable has his residence in Constable's Gate. Between 2007 and 2009, English Heritage spent £2.45 million on recreating the castle's interior. According to figures released by the Association of Leading Visitor Attractions, nearly 350,000 people visited Dover Castle in 2010.
The Queen's & Princess of Wales's Royal Regiment Regimental Museum is located in the castle.


Image Courtesy of Wikimedia and Colin Smith.
Sight description based on Wikipedia.
2

Old St James's Church is a Saxon church mentioned in the Domesday Book. The structure of the church that is preserved until the present dates back to the 12th century. It was also used for official meetings by Barons of the Cinque Ports. In the 19th century, a decision was made to enlarge the church and to give it a new look. A new church with the same name was built in the region of Maison Dieu Road. During World War II, it was seriously damaged and the old church was maintained as a historical place that would commemorate people who suffered so much during the war. The new church was restored and continued to function.
Image Courtesy of Flickr and HBarrison.
3

3) The Church of St Martin-le-Grand

The Church of St. Martin-le-Grand dates back to the seventh century and was destroyed in the ninth century. A new church by the name of St. Mary-in-Castro was built with the remains of this church. At the remains of the old church in the 15th century, there are mentions about the three churches that merged under the same roof with different altars and services; the churches were St Martin, St Nicolas and St John-the-Baptist. During the Second World War, the church was destroyed and some remains of the church can now be seen in the market square that bears the original elements of the first church of this name.
Image Courtesy of Flickr and seyed mostafa zamani.
4

Cowgate Cemetery was formed on the land that Mr. William Mowll donated for a burial ground. It is an appropriate place for a cemetery due to the close proximity of the St. Mary church. There were no plans for this cemetery. It has a rectangular form and is divided in pathways. It is enclosed on three sides by walls and trees in order to make it a true place of rest.
Image Courtesy of Wikimedia and John Mavin.
5

Drop Redoubt is part of one of the most important fortifications in England, The Western Heights. During the period of Napoleonic wars, the city was invaded due to the fact that it was located in the south and had a port, and it needed forts to protect it. Drop Redoubt was strengthened several times, the last time being in the nineteenth century. It is linked to another fort, the Citadel, that forms The Western Heights. Now it is under the protection of the Western Heights Preservation Society that protects it from vandalism and keeps it intact in order to preserve its historical status for a long period of time.
Image Courtesy of Flickr and shirokazan.
6

The Grand Shaft represents a 140 feet, triple-spiral staircase. It was made for protection from any invasion or danger. It was designed by Captain Hyde Page and was built in the period between 1805-1807. It was the place from which men and equipment were transferred to Western Heights. It has windows inside the wall that allow the light to get inside it, making it easier to use. It was built in the period of the Napoleonic Wars, representing a part of the major fortification of Western Heights. It has a diameter of 6 meters and a height of 42 meters, with 200 steps in each staircase.
Image Courtesy of Flickr and HBarrison.
7

Knights Templar Church is a small church that represents great historical events. In 1213, King John of England came into this church to officially submit to the Pope, and this meant that he became a papal vassal. The person that managed to convince the king in his decision was Pandulf, who soon became Bishop of Norwich and one of the King's main supporters. It dates back from the 12th century and was built by Knights Templar. The usual shape of Templar churches is circular. The remains of this church were discovered by military engineers that were fortifying Western Heights in the 19th century.
Image Courtesy of Wikimedia and Gabirro.
8

Dover Citadel is the heart of the Western Heights fort. It was built between 1804 and 1815 with the purpose of protection in the case of war or invasion. In the 1860s, it was renovated and enlarged in order to become stronger. It is protected from each part of the fort by other buildings and by modern offices that are being built increasingly. It was designed by Vauban; each ditch is flanked by gunrooms. In the period betwen 1952 and 1957, it was a Borstal, Youth Offenders Institute and then in 2002, it was transformed into an Immigration Center for Immigration Services that helped people.
Image Courtesy of Flickr and Ted and Jen.
9

Archcliffe Fort dates back to 1539. At the time of Henry VIII, some changes were made at the fort, due to the fact that a bulwark was constructed. In the period of the Spanish Armada, the fort was strengthened because it was an important location for defense. In the 17th and 18th centuries, important repairs were made to the fort. In the 1920s, a part of the south half of the fort was destroyed in order to build a railway line. Now the fort is used by a Community that help homeless people by providing them with accommodation, food and work, in order to help them integrate into the present society.
Image Courtesy of Wikimedia and Chris Whippet.