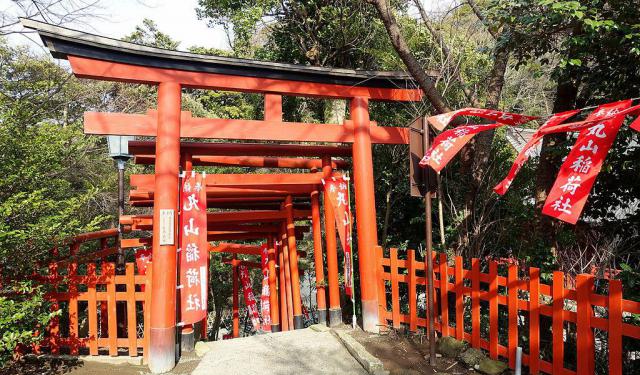 There are many historic Buddhist temples near Yokohama, some of which are listed as national heritage. The most significant of them are concentrated in the town of Kamakura. This self-guided tour will lead you through some of these historic religious sites that reveal the culture, tradition and beliefs of the East.
How it works: Download the app "GPSmyCity: Walks in 1K+ Cities" from iTunes App Store or Google Play to your mobile phone or tablet. The app turns your mobile device into a personal tour guide and its built-in GPS navigation functions guide you from one tour stop to next. The app works offline, so no data plan is needed when traveling abroad.

Hase-dera Temple is a Buddhist temple in Kamakura that dates back to 736. There is a big wooden statue of Kannon. Bandō Sanjūsankasho pilgrims stop at this place during their pilgrimages. The statue is 9.18 meters tall and has 11 heads. There are underground caves where you can see many different statues representing numerous gods and goddesses of Buddhism.The best times of year to visit this temple are in spring, because at this time of year the peonies that line the 200m walkway from the gate to the hall are in bloom. There is approximately 700 Chinese peonies planted here and they are a popular attraction. Autumn is the other time of year that Hase-dera is especially beautiful, when the many maple trees have turned to a stunning red color.
Image by Bernard Gagnon on Wikimedia under Creative Commons License.
Sight description based on wikipedia
2

Kōtoku-in Temple is the temple most visited by tourists in this part of Japan. Visitors come here to admire the temple's monumental statue of Amida Buddha. The statue is made from bronze and looks very impressive.The bronze Buddha is approximately 13.35 meters tall including the base and weighs approximately 93 tonnes. The statue is hollow, and visitors can view the interior. According to the temple's records the statue dates from 1252. In the 15th century there was a tsunami that crashed into the temple but the statue remained unharmed. Since then it has stood outside.
Image by David Jones on Flickr under Creative Commons License.
Sight description based on wikipedia
3

Zeniarai Benzaiten Ugafuku Shrine popularly known simply as Zeniarai Benten. In spite of its small size, it is the second most popular spot in Kamakura after Tsurugaoka Hachiman-gū. Zeniarai Benzaiten is popular among tourists because the waters of a spring in its cave are said to be able to multiply the money washed in it.

The object of worship is a syncretic kami which fuses a traditional spirit called Ugafukujin with the Buddhist goddess of Indian origin Sarasvati, known in Japanese as Benzaiten. The shrine is one of the minority in Japan which still shows the fusion of native religious beliefs and foreign Buddhism which was normal before the Meiji restoration (end of the 19th century). Zeniarai Benzaiten used to be an external massha of Ōgigayatsu's Yazaka Daijin, but became independent in 1970 under its present name.

Image by Bernat on Wikimedia under Creative Commons License.
Sight description based on wikipedia
4

Hongakuji Temple dates back to 1436. It is a temple of the Nichiren sect of Buddhism; Priest Nichiren's ashes are kept inside. Nichiren was a very talented preacher of his time, but absolutely intolerant of other branches of Buddhism, and that is why he was prosecuted. There is a statue of the Priest Nichiren in the main hall. The Japanese come here to pray for their success in business.
Image by Flowizm on Flickr under Creative Commons License.
5

Tsurugaoka Hachimangu Shrine is the most important Shinto shrine in the city of Kamakura and it was originally built in 1063 in Zaimokuza. Minamoto no Yoritomo, the founder of the Kamakura shogunate, moved it to its present location in 1191. It is the venue of many of its most important festivals, and hosts two museums. The shrine is dedicated to the Shinto god of war. You will walk through the Wakamiya Oji to reach the shrine. It is a pedestrian path along which grow beautiful cherry trees and there are numerous souvenir shops. Beautiful lotus ponds around the shrine will catch your attention. You will see near the shrine a ginkgo tree 1,000 years old where a violent crime was once committed. Tsurugaoka Hachimangu includes several sub-shrines, the most important of which are the Junior Shrine at the bottom, and the Senior Shrine 61 steps above.
Image by ja:利用者:S.fukasawa on Wikimedia under Creative Commons License.
Sight description based on wikipedia
6

Kenchō-ji is a Rinzai Zen temple, which ranks first among Kamakura's so-called Five Great Zen Temples (the Kamakura Gozan) and is the oldest Zen training monastery in Japan. These temples were at the top of the Five Mountain System, a network of Zen temples started by the Hōjō Regents. Still very large, it originally had a full shichidō garan and 49 subtemples.

The temple was constructed on the orders of Emperor Go-Fukakusa and completed in 1253, fifth year of the Kenchō era, from which it takes its name. It was founded by Rankei Doryū, a Chinese Zen master who moved to Japan in 1246, spending some years in Kyushu and Kyoto before coming to Kamakura.

Fugenzan Meigetsu-in is a Rinzai Zen temple of the Kenchō-ji school. Meigetsu-in was built by Uesugi Norikata of the powerful Uesugi clan, and the name itself derives from Norikata's own posthumous name (Meigetsu). According to 350-year-old records it was originally just the guest rooms of a much bigger temple called Zenkō-ji. It is well-known for its hydrangeas. Here the Japanese come to worship the goddess Shō Kannon. There is a beautiful garden that you can see through a special round window and there are plants and stones that imitate the legendary Buddhist Mount Shumi. The temple is also the owner of a famous 13th century statue of Uesugi Shigefusa, founder of the Uesugi clan. This statue is considered to be a national treasure.
Image by d'n'c on Flickr under Creative Commons License.
Sight description based on wikipedia
8

Engaku-ji is one of the most significant Zen Buddhist temple complexes in Japan and the main center of Zen training in the Kantō region. The temple was founded in 1282 by a Chinese Zen monk at the request of the then ruler of Japan, the regent Hōjō Tokimune after he had repelled a joint Mongolian-Korean invasion in the period 1274 to 1281. The temple was intended to honour those who died on both sides in the war, as well as serving as a centre from which the influence of Zen could be spread. According to the records of the time, when building work started a copy of the Sutra of Perfect Enlightenment (in Japanese, engaku-kyō 円覚経) was dug out of the hillside in a stone chest during the initial building works, giving its name to the temple. The temple stands on a wooded hill and consists of 18 temples. Among other attractions found within the complex are the gates, burial sites, statues of Kannon, and the great bell.
Image by Pomakis on Wikimedia under Creative Commons License.
Sight description based on wikipedia

Located near Tokyo Metropolitan Area, Yokohama is a newer type of city distinguished by its lavish shopping scene and giant buildings. It is a home to a number of museums, highly-evolved seafront Minato Mirai district and picturesque Chinatown. A visit to Yokohama makes a fresh break from the neighboring Tokyo. Take this orientation walk to enjoy your trip to Yokohama to the maximum.