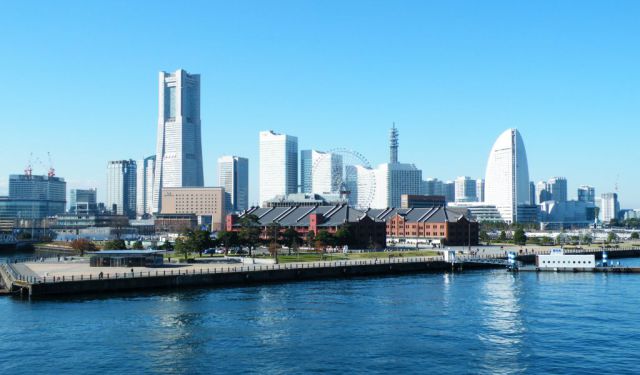 Image by Marc Antomattei on Wikimedia under Creative Commons License.

Located near Tokyo Metropolitan Area, Yokohama is a newer type of city distinguished by its lavish shopping scene and giant buildings. It is a home to a number of museums, highly-evolved seafront Minato Mirai district and picturesque Chinatown. A visit to Yokohama makes a fresh break from the neighboring Tokyo. Take this orientation walk to enjoy your trip to Yokohama to the maximum.
How it works: Download the app "GPSmyCity: Walks in 1K+ Cities" from iTunes App Store or Google Play to your mobile phone or tablet. The app turns your mobile device into a personal tour guide and its built-in GPS navigation functions guide you from one tour stop to next. The app works offline, so no data plan is needed when traveling abroad.

Yokohama Chinatown history is about 150 years long. Today only a few Chinese people still live in Chinatown, but it has a population of about 3,000 to 4,000. Most of the residents are from Guangzhou (Canton) but many come from other regions.

Yokohama Chinatown is the largest Chinatown not only in Japan but also in Asia (larger than Chinatowns in both Kobe and Nagasaki) and it is one of the largest in the world. There are roughly 250 Chinese-owned/themed shops and restaurants scattered throughout the district, with the highest concentration centered around a 300 square metre area.

Image by Aimaimyi on Wikimedia under Creative Commons License.
Sight description based on wikipedia
2

Yokohama Kanteibyo or Guanditempel Yokohama is a Taoist temple in Yokohama Chukagai dedicated to the Chinese god Guandi. In 1871 the temple was built by Chinese immigrants. It is set in Chinatown and represents a historic site that lures tourists. It dates back to 1887 and is also very interesting from an architectural point of view. Annually, on the anniversary of Guandi there are held many festivities in this area. There are parades with Chinese dance, traditional Dragon-dance and Lion-dance. There are also great prayer ceremonies organized.
Image by KimonBerlin on Flickr under Creative Commons License.
Sight description based on wikipedia
3

There is a district of Yokohama famed for its Motomachi shopping street. This place is very popular with tourists. The area bears the signs of heavy western influence and is lined with many boutiques, shops and outlets. Alongside western-type boutiques, there are fashionable stores that sell designer clothes known as "hama tora", which means "Yokohama traditional".
Image by OiMax on Flickr under Creative Commons License.
4

Yokohama Marine Tower is a 106 metre high (348 ft) lattice tower with an observation deck at a height of 100 metres.

The light characteristic is marked by a flash every twenty seconds, whereby the light's colour is alternating red and green. Originally, at night, the tower shaft itself was lit green and red according to its markings, but now, after the reopening on May 2009, the lights are white.

Yokohama Marine Tower was inaugurated in 1961. The Marine Tower is billed "the tallest lighthouse in the world", although this depends on what lighthouses are considered.


Image by OiMax on Flickr under Creative Commons License.
Sight description based on wikipedia
5

Yamashita is a very nice park, situated just on the shore of Tokyo Bay, bordering the new urban development area Minato Mirai 21. It features flower gardens, alleys and a fountain. The park also gives opportunities for great photo shots and panoramic views over the sea and the Minato Mirai giant buildings.
Image by Kounosu on Wikimedia under Creative Commons License.
6

Ōsanbashi Pier is the main international pier at the Port of Yokohama. Ōsanbashi is the oldest pier in Yokohama, originally constructed between 1889 and 1896.

To meet modern demands, Ōsanbashi was reconstructed between 1987 and 2002. The newly reconstructed passenger terminal is named the Yokohama International Passenger Terminal, designed by Foreign Office Architects. There is limited parking on the 1st floor, and an observation deck open to the public, on the rooftop.

2nd Floor: Monday – Sunday: 9 am – 9:30 pm
Image by Captain76 on Wikimedia under Creative Commons License.
Sight description based on wikipedia
7

The Yokohama Red Brick Warehouse is a historical building that is currently used as a complex that includes a shopping mall, banquet hall, and event venues. The complex, officially known as the Newport Pier Tax Keeping Warehouse, was originally used as customs buildings, and has two sections: Warehouse No.1 and No.2.

Building No. 1 is currently regarded as a cultural facility, and is utilized as an event venue for art exhibitions, film festivals, musical competitions and plays. Building No. 2 houses a shopping mall and restaurant arcade, and a balcony from which visitors can view the harbour opened on the 3rd floor in 2007. Other sightseeing spots including Yokohama Chinatown, Minato Mirai 21, and Yamashita Park are located nearby.
Image by Tamago Moffle on Flickr under Creative Commons License.
Sight description based on wikipedia
8

The NYK Maritime Museum is one of the most visited museums in Yokohama. It is situated on the waterfront. Here you can learn about the history of shipping in Japan. The displays include model ships, uniforms, photos, furnishings, biographies of ship captains, and there is also a library with books on maritime topics. The museum shop sells souvenirs.

Opening hours: 10 am - 5 pm; Last entry at 4:30 pm; Closed on Monday.
Image by 663highland on Wikimedia under Creative Commons License.
9

Minato Mirai 21, “the harbor of the future'', is a large urban development area in Yokohama. It represents the bustling and cosmopolitan side of the city, situated in its center and displaying department stores, offices, residential space and dining areas. With many famous buildings and the nearby Chinatown it turns to be the number 1 attraction of Yokohama.
Image by Volfgang on Wikimedia under Creative Commons License.
10

Nippon Maru Ship is said to be "swan on the Pacific Ocean." It was built in 1930 and is now a ship museum. Prior to that, it was a training ship for apprentice sailors. The ship became a museum largely due to its well-preserved original design. When on board, make sure to visit the Captain's Cabin, the Officer's Salon and a merchant marine classroom.

The Yokohama Landmark Tower is the tallest building and 3rd tallest structure in Japan, standing 296.3 m (972 ft) high. Work on the building was finished in 1993. It has the highest observation deck in Japan.

The building contains a five-star hotel which occupies floors 49-70, with 603 rooms in total. The lower 48 floors contain shops, restaurants, clinics, and offices.

On the 69th floor there is an observatory, Sky Garden, from which one can see a 360-degree view of the city, and on clear days Mount Fuji.

There are many historic Buddhist temples near Yokohama, some of which are listed as national heritage. The most significant of them are concentrated in the town of Kamakura. This self-guided tour will lead you through some of these historic religious sites that reveal the culture, tradition and beliefs of the East.