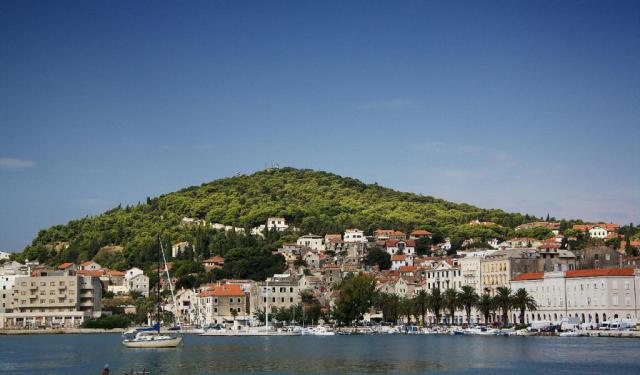 Marjan Hill is a unique landform in Croatia, located on the peninsula of Split. The low mountain is surrounded by the sea and the city, and is the only green oasis ideal for walks, excursions, and rock climbing. Tourists will admire splendid views of Split as well as other surrounding towns and villages. At the bottom of the hill you'll discover a gallery and workshop from the famous artist Ivan Mestrovic.
Image Courtesy of Flickr and zergu.
How it works: Download the app "GPSmyCity: Walks in 1K+ Cities" from iTunes App Store or Google Play to your mobile phone or tablet. The app turns your mobile device into a personal tour guide and its built-in GPS navigation functions guide you from one tour stop to next. The app works offline, so no data plan is needed when traveling abroad.

The Kastelet once was a summerhouse for the Capogrosso family. The home was built in the 16th century and then converted into a chapel after Meštrović purchased the building in 1939. The Meštrović Kaštelet features one of the greatest works from the sculptor – 28 wood carvings representing the life and death of Christ. The crucifix inside the church is also special. It dates back to 1916 and is the earliest work in the church.

Why You Should Visit:
To be in antique times, in the chapel's medieval spirit and in the early 20th century at the same time!

Tip:
You are meant to buy your ticket at the main Meštrović gallery before coming here.

Image Courtesy of Wikimedia and SchiDD.
2

Artist and sculpture Ivan Mestrovic bought a plot of land in the 1920s. The land was on the Marjan peninsula, west of the City of Split. He intended to build a villa for a summer home. The villa was completed in 1939 after a design by Mestrovic. The building overlooked the Adriatic sea. It was meant to be a home, working and exhibition space.

Initially, the Gallery held 70 sculptures chosen to be shown in the museum of his work in Split. Over time these holdings grew through donations from Mestrovic, his heirs and other artists. The gallery was closed for renovations after the war of Croatian Independence. It had been damaged and it was in a near dilapidated condition.

The Gallery re-opened in 1998 with a new permanent collection. The Gallery's holdings today include 583 drawings, four paintings, 291 architectural plans and some sets of furniture. The Gallery also is home to 168 works of art donated by the heirs of Ivan Mestrovic.

On permanent exhibition are two floors of art and an outdoor sculpture garden. The works are arranged by theme rather than chronologically and in conformity with the space.

The Museum of Croatian Archaeological Monuments located at Meštrovićevo šetalište is the only museum in the country dedicated to researching and presenting cultural artifacts of the Croats in the Middle Ages, between the 7th and 15th centuries, particularly the time of the early medieval Croatian state from 9th to 12th century.

Originally founded in Knin in 1893, the museum was moved first to Sinj, then Klis and finally to Split where today the collection is displayed in a purpose-built museum complex, opened in 1976.

The holdings consist mainly of jewelry, weapons and items of daily use, and include a large number of stone artifacts that once belonged to the old Croatian church interiors. The collection of early medieval wicker, clay figurines, and old Croatian Latin epigraphic monuments is the largest of its kind in Europe.

An ancient Christian basilica once stood under the pines in what is now Sustipan Park. The foundations of the basilica served to support the medieval monastery of Saint Stephen. The monastery occasionally became a retreat for Croatian royalty. The last member of the dynasty Trpimirovic, King Stjepan II slept here.

At the beginning of the 19th century Sustipan became the location of Split's first cemetery. During the Communist era, however, the tombs and memorials of the cemetery were smashed and the deceased were transferred to a new location. Today only a classicistic gloriette remains of the old site.

Sustipan has evolved into a beautiful rustic park, an oasis next to the city. Every summer the park hosts the musical event San Sustipanske Noci (Sustipan Nights). Audiences sit on the grass under the pines and listen to a smorgasbord of modern music.

The eastern part of Sustipan provides one of the most striking views of Split. From the western side one can see the ACI Marina and the water polo club Jedran.
Image Courtesy of Wikimedia and Zvone00.
5

Marjan Hill fits the definition, "And now, for something completely different..." it holds a special place in the life of the City. For years city dwellers would see the old Yugoslav flag flying from the top of the hill. Now, Croatia, proudly independent, flies its own flag on top of Marjan Hill. In 1964 Marjan became a park and part of the city.

The park extends from Marmont Street west for nearly two miles. During summer months, amid the chaotic pace of the town it is a popular escape. The hills and woods of the park are the very lungs of the city. It is the preferred place for walking, jogging, climbing, or bike riding.

The highest peak in the park is Telegrin, so named for the telegraph which stood there in Napoleonic times. The park is also the location of the Ivan Mestrovic Gallery, an art gallery open to the public. Meje Split neighborhood, the city's elite seaside beach district is here, surrounded by the sea on three sides.

There are many possible entrances to Marjan Park. The favored one begins at Terrace Vidilica, a bar and restaurant with a great view. This is but a five minute walk from the promenade. If walking be prepared for an early climb.
Image Courtesy of Flickr and David Jones.
6

On the eastern edge of the Marjan is the Old Jewish Cemetery founded in 1573. The cemetery has just over 700 graves. The last burial was in 1945. Then the cemetery was closed to further burials and it was declared to be a national monument.

The land for the cemetery was bought by Daniel Rodrigo in 1573. Daniel was a refugee from the Inquisition in Portugal. An skilled negotiator, he secured a trading deal between Split and the Venetian Republic. It involved the transshipment of goods from the east through Split to Venice. It proved to be a benefit to Split and the Jewish community.

The oldest graves have a flat slab on top or a sarcophagus roof. The older stones are engraved with Hebrew inscriptions. The more recent grave markers are similar to non-Jewish Croatian graves.

Today, the 100 or so members of the Jewish community in Split have a designated Jewish section at the Public Cemetery of Lovrinac, where a Holocaust memorial can be found.
Image Courtesy of Wikimedia and MOs810.
7

One characteristic of the Marjan Hills is a harborage of churches. They are mini-churches, almost like the tiny churches in the guard towers of Diocletian's Palace. They nestle in the forest, beside the trails or carved into the rock of the hillsides. They date from medieval times, offering spiritual retreat to the citizens of Split.

St. Nicholas qualifies as one of these havens from the world. It is small. It is an early rustic chapel from the 13th century. The church is devoted to St. Nicholas, patron saint of fishermen. There are a respectable number of fishermen in Split.

The church was built by one Rako and his wife in 1219. It was donated to the Abbey of St. Stephen on Sustipan. Later it was cared for by Benedictine monks and even later by hermits. Today it is in the care of the Marjan society.

St. Nicholas on the Hill is perched on the southeast slopes of Marjan, watching over the sea and the ships and the sailors who go to sea.
Image Courtesy of Wikimedia and Bernard Gagnon.
8

One sees signs for "Marjan Hill" and a few steps later there is a totally different world. Marjan Hill Park extends out from Split on a rugged peninsula jutting into the Adriatic. The park is densely forested, mostly with pines. The forest is a sign of recovery. Over the years the hills of what is now Marjan were stripped bare.

The peninsula reforested but it was too rugged to build on except for the ancient Jewish cemetery, and many very small churches or chapels hidden under the trees or carved into the hillsides. The highest point is a hill called Telegrin. When Napoleon's armies controlled Dalmatia. There was a telegraph signal tower atop the hill.

The hill was the perfect place for a visual telegraph. The hill can be seen for miles around, especially from the sea. The telegraph is long gone but the Croatian flag remains. Napoleon didn't stay long. He was a busy man.

Marjan Hill is 178 meters (578.8 feet) high. The peak can be reached by a staircase of 314 steps. Getting around the park can involve some serious climbing, but not to worry. There are dozens of benches conveniently placed. Be sure to bring good shoes for hiking, snacks and plenty of water.
Image Courtesy of Flickr and mike.