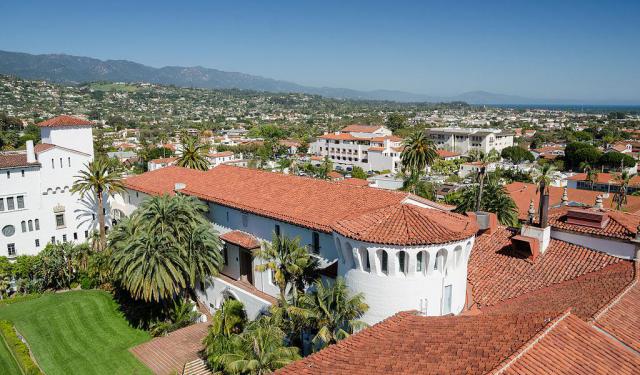 Image by Photopippo on Wikimedia under Creative Commons License.

Nowadays widely regarded as a posh location favored by the rich and famous, Santa Barbara is a beautiful coastal town and a popular weekend spot in Southern California. Other than its beaches and warm climate, the city is also famous for its red-tile roofed stucco architecture, reflecting Spanish colonial heritage, and a plethora of cultural attractions. Follow this orientation walk and discover Santa Bardara in its entirety.
How it works: Download the app "GPSmyCity: Walks in 1K+ Cities" from iTunes App Store or Google Play to your mobile phone or tablet. The app turns your mobile device into a personal tour guide and its built-in GPS navigation functions guide you from one tour stop to next. The app works offline, so no data plan is needed when traveling abroad.

De la Guerra Plaza was a public gathering place and festival area as far back as Santa Barbara's Mexican Alta California era. The plaza is located in front of the De la Guerra Adobe.
Now,De La Guerra Plaza is a small park type area in downtown Santa Barbara, next to the Santa Barbara News Press. It is best known for the activities that take place there during Santa Barbara's huge annual Fiesta, early every August. There are booths, musical performances and lots of festivities for the downtown area in De La Guerra Plaza.
Image by Prayitno on Flickr under Creative Commons License.
Sight description based on wikipedia
2

The Casa de la Guerra was the residence of the fifth commandant of the Presidio de Santa Barbara, José de la Guerra y Noriega from 1828 until his death in 1858. The site is currently owned and operated by the Santa Barbara Trust for Historic Preservation as a historic house museum.

The most significant changes in this time were the removal of the adobe columns in favor of wooden columns and the addition of wooden siding to the house.

The Casa is a Santa Barbara City Landmark, a California Historical Landmark, and is listed on the National Register of Historic Places (as a part of a composite object El Paseo and Casa de la Guerra).

The Casa de la Guerra interior is open to visitors Saturdays and Sundays, although the exterior may be explored any time.

Image by savemejebus on Flickr under Creative Commons License.
Sight description based on wikipedia
3

In October 1932 a voluntary association was formed consisting of representatives from a number of local organizations. This new association was the Santa Barbara Historical Society. Soon after its founding, the Society was offered the “tower” room in the Santa Barbara County Courthouse as an exhibition space. The Society’s growth necessitated a larger space than the courthouse tower room. Katherine Bagg Hastings offered her home and arranged to transfer ownership of the house to the Society upon her death. The Society would remain housed in the Old Mission for the next eleven years. In 1959 the Society acquired the Judge Charles Fernald Mansion. After a massive restoration project, Fernald House opened to the public as an historic home museum in 1962.

El Presidio Real de Santa Bárbara, also known as the Royal Presidio of Santa Barbara, is a former military installation in Santa Barbara. The presidio was built by Spain in 1782, with the mission of defending the Second Military District in California. In modern times, the Presidio serves as a significant tourist attraction, museum and an active archaeological site as part of El Presidio de Santa Barbara State Historic Park. The park contains an original adobe structure called El Cuartel, which is the second oldest surviving building in California. The Presidio was listed on the U.S. National Register of Historic Places in 1973.

Only two portions of the original presidio quadrangle survive to this day: the Cañedo Adobe, and the remnants of a two-room soldiers quarters, called El Cuartel. The site’s operator reconstructed the rest of the site, with the most recent construction—two rooms in the northwest corner of the site—finished in May 2006. The reconstruction is ongoing, with the construction of two more rooms in the northwest corner beginning in December 2007.

The site of the Presidio was chosen by Felipe de Neve, the first governor of Las Californias. Construction began on April 21. By the next year, a temporary facility had been completed. The Presidio was built as a fortress, and therefore included a strong outer wall with an open parade ground on all sides affording clear visibility. Several devastating earthquakes in the early 19th century destroyed much of the structure. In 1963, the Santa Barbara Trust for Historic Preservation was founded, with the primary mission of restoring the Presidio.
Image by Antandrus on Wikimedia under Creative Commons License.
Sight description based on wikipedia
5

The courthouse is composed of four buildings, totaling 150,000 square feet (14,000 m2). It includes a Jail Wing, which is no longer used to hold prisoners. Visitors may take elevators to the summit of the 85 ft (26 m) "El Mirador" clock tower, which has labeled photographs that show what the viewer is looking at in all directions.

Occupying an entire city block, the grounds contain a collection of palms and specimen trees from more than 25 countries. The courthouse hosts many events, particularly at the Sunken Garden, site of the 1872 courthouse.
Image by tkksummers on Flickr under Creative Commons License.
Sight description based on wikipedia
6

The Faulkner Art Gallery, and Faulkner East and West Galleries, are also located within the library building.

The library building was designed in 1924 by the architect Carleton Winslow in the Italianate style.
Image by Padraic Ryan on Wikimedia under Creative Commons License.
Sight description based on wikipedia
7

The Arlington Theater is the largest movie theater and principal performing arts venue in Santa Barbara. In addition to regular screenings and artists, it is home to many events associated with the annual Santa Barbara International Film Festival.

The Arlington was built in 1931 on the former site of the Arlington Hotel, which was destroyed following the 1925 earthquake. The current structure was erected in 1930 as a showcase movie house for Fox West Coast Theaters. It was restored and expanded in the mid-1970s by Metropolitan Theaters Corporation. It opened in its current incarnation in 1976.

The interior is elaborately decorated. The ceilings of the lobbies are heavily beamed and painted. The auditorium itself seats 2,000 on the main floor and balcony. It is built to give the theatergoer the impression that he is sitting outside in the plaza of a colonial Spanish town, each wall features houses, staircases, and balconies, not painted on but built out from the walls.
Image by DillyLynn on Wikimedia under Creative Commons License.
Sight description based on wikipedia
8

On State Street , you’ll find plenty of surf shops, as well as the best of the stores and brands you already know and love. Additionally, you’ll find the entrance to Paseo Nuevo Mall. Loaded with shops and showrooms, restaurants, bars, and coffee shops, State Street is definitely the main artery in town.
Image by Prayitno on Flickr under Creative Commons License.
9

It was founded in 1941 and currently ranks amongst the top 10 regional art museums in the United States. It is home to both permanent and special collections, the former of which includes Asian, American, and European art that spans 4,000 years from ancient to modern. The permanent collection also includes pre-Columbian sculpture, African sculpture, musical instruments, the Alice Schott Doll Collection, which includes dolls from the seventeenth, eighteenth and nineteenth centuries, American and European paintings, and French Impressionists. The American art collection contains early portraits as well as 19th- and 20th century still lifes, landscapes and sculptures. The Asian art collection contains art from China, Japan, Tibet, India and South-east Asia.
Image by Al R on Flickr under Creative Commons License.
Sight description based on wikipedia
10

Santa Barbara's Moreton Bay Fig Tree is believed to be the largest Ficus macrophylla in the country.

A seaman, visiting Santa Barbara in 1876, presented a seedling of an Australian Moreton Bay Fig tree to a local girl who planted it at 201 State Street. After the girl moved away a year later, her girlfriend, Adeline Crabb, transplanted the tree to the corner of Montecito and Chapala streets on land then owned by the Southern Pacific Transportation Company. The tree was officially designated as a historic landmark in 1970, and the property was deeded to the City of Santa Barbara in 1976. The tree has since been placed on the California Register of Big Trees.

In July 1997 the circumference of the tree at 4-1/2 feet above ground was 498 inches (41-1/2 feet). The average crown spread was 176 feet and the total height was 80 feet. Measured in 2010, the widest spread of the branches is 198 feet (60 m). The trunk diameter above the buttress roots is 12.5 feet.
Image by gailf548 on Wikimedia under Creative Commons License.
Sight description based on wikipedia
11

The Waterfront ranges from Leadbetter Beach, past the Harbor, West Beach, Stearns Wharf, Chase Palm Park, the Zoological Gardens and to East Beach. Along this stretch of incredible coastline you will find restaurants, shops, artists, and a bike trail.
Image by Michael Theis on Flickr under Creative Commons License.