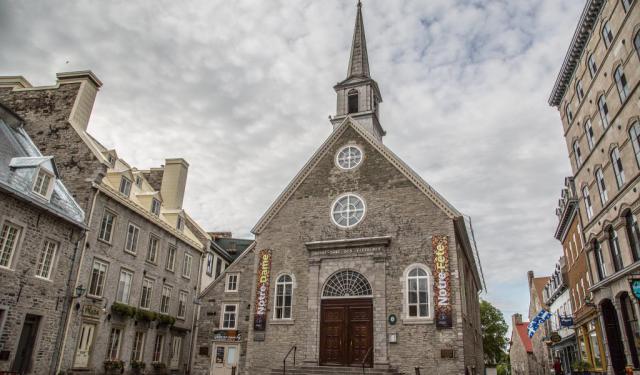 The first religious buildings in Canada were established by Récollets and Jesuits in 1615 and 1625 when they first arrived to "New France". Later on, the colonists brought French culture and architectural traditions. The establishment of British and evangelical society brought major developments to Quebec City. Here is a list of some of the most alluring divine attractions to visit.
Image Courtesy of Flickr and Tony Webster.
How it works: Download the app "GPSmyCity: Walks in 1K+ Cities" from iTunes App Store or Google Play to your mobile phone or tablet. The app turns your mobile device into a personal tour guide and its built-in GPS navigation functions guide you from one tour stop to next. The app works offline, so no data plan is needed when traveling abroad.

Notre-Dame-des-Victoires is a small Roman Catholic church on Place Royale, the oldest stone church in Quebec and Canada, and one of the oldest in North America. Its construction lasted from 1687 to 1723, and took place upon the ruins of Champlain's first dwelling.

Originally dedicated to l'Enfant Jésus (baby Jesus), the church received the name Notre-Dame-de-la-Victoire following the Battle of Quebec of 1690, in which an English expedition commanded by Major-General William Phips was forced to retreat. In 1711, the name was changed again, to Notre-Dame-des-Victoires (plural), after bad weather had sunk a British fleet commanded by Hovenden Walker. The church was largely destroyed by the British bombardment that preceded the Battle of the Plains of Abraham in September 1759, but was completely restored in 1816.

The building, listed as a historic monument since 1929, remains a popular tourist attraction within the city, as well as a place of worship. It has undergone extensive restoration in recent decades, to bring back its colonial French character.

While the structure seems to get an updating/face-lift every century or two, there remain some original parts dating back to the 1600s. In the basement, for instance, you can still see one of the original walls, and archaeological digs have uncovered one of the building's original turrets in the facade.

Once you are in Basse-Ville (the lower Quebec City), you'll probably walk right by the front of this church. There is no charge for going in and it will only take moments of your time, but will leave you with lasting memories. Although rather austere, the interior takes visitors back in time, featuring several paintings from the 17th, 18th and 19th centuries.

Unique to Québec, the frescoes on either side of the main altar retrace the history of the church and city, and were done by local painter and decorator Jean-M. Tardivel. The most striking accent, however, is the single ex-voto, a model of a vessel that arrived in 1664, which hangs suspended over the pews. A model of the Brézé, the ship commanded by the marquis of Tracy, can also be seen here.

In 2002, the church served as a filming location for Catch Me If You Can.


Image Courtesy of Flickr and Reading Tom.
Sight description based on Wikipedia.
2

Dating back to the mid-17th century, this was the first parish church in North America and the first in the country to be elevated to the rank of minor basilica, by Pope Pius IX in 1874. It has been restored several times over the years in order to maintain the marvelous architecture still admired to this day. The inside chancel lamp was donated by Louis XIV and completing the church's impressive adornments are stained glass windows, paintings of the Virgin Mary that date back to the French regime, the bishop's original throne, and a stunning gold-plated baldaquin canopy suspended above the altar.

Between 1654 and 1898, over 900 people were buried in the crypt below the church, including twenty bishops and four governors. It's also rumored that Samuel de Champlain himself is buried nearby; archaeologists have been searching for the grave for over 50 years. In 2014, when the church celebrated its 350th anniversary, a holy door was installed (the only one of its kind in North America, and one of eight across the world), which will be open on Jubilee years.

Why You Should Visit:
Breathtaking at every turn and filled with quaint charm, gorgeous stained glass – a photographer's paradise.

Tip:
See the basilica during the day, but consider the laser light show in the evening. The line to get in is very long, so buy your tickets online and pick them up at the office the night of the performance. Not the cheapest 30 minutes, but worth it if you want to see a magnificent building shine in a whole new way.

3) Cathedral of the Holy Trinity

Built in 1804, this was the first cathedral of the Diocese of Quebec built outside the British Isles. It is home to two parishes: Paroisse de Tous les Saints and the Parish of Quebec.

The Diocese of Quebec was founded in 1793 and its first bishop, Dr. Jacob Mountain, gave his early attention to the erection of a cathedral. The completed building, designed by military officers William Robe and William Hall and built between 1800 and 1804, was consecrated on August 28, 1804. It was the first Anglican cathedral to be built outside of the British Isles.

Designed in the neoclassic Palladian style, the Cathedral was modeled after the St Martin-in-the-Fields Church in Trafalgar Square, London, and the Marylebone Chapel (now known as St Peter, Vere Street). King George III paid for the construction of the Cathedral and provided a folio Bible, communion silverware and large prayer books to be used for worship.

The bell-tower is home to 8 bells, founded by Whitechapel in 1830, and are the oldest change-ringing peal in Canada. Due to deterioration, they were brought down in 2006, sent to Whitechapel in London for re-tuning, and reinstalled in April 2007.

The Cathedral of the Holy Trinity was designated a National Historic Site of Canada in 1989.
Image Courtesy of Wikimedia and Jeangagnon.
Sight description based on Wikipedia.
4

This church celebrated its 250th anniversary in 2009. St. Andrew’s Presbyterian Church’s existence is linked to the British conquest in 1759 and was built in 1810 in honor of the apostle it is named after. Currently it is the oldest congregation of Scottish descent in Canada.

The long-contemplated Church was dedicated on November 30, 1810, on St. Andrew's Day, and appropriately named after the apostle. The building remains virtually unchanged but for the addition of the Vestry in 1900.

On the same triangular site with the church are the Kirk Hall, first erected in 1829 as a Protestant School which continued as a flourishing scholastic institution for many years; and the magnificent Manse erected in 1837, which was the residence of the ministers until 2017. William Reed was notably the church's organist from 1900-1913.
Image Courtesy of Wikimedia and Jeangagnon.
Sight description based on Wikipedia.
5

Established in 1771, this is the oldest cemetery in Quebec City. In the beginning it was limited to the burial of Protestants, but later became a resting place for the early English settlers. In 1860, the cemetery was closed and was turned into a park next to the St. Matthew’s Anglican Church. While visiting Quebec City, take time to come to this silent place and admire the park's beauty.
Image Courtesy of Flickr and Quevillon.
6

Originally built in 1847, it was destroyed and rebuilt in 1884 using the design of two medieval French churches with a spire 73 meters high. Designed by architect Joseph-Ferdinand Peachy in the Second Empire style, the church was inspired by the facade of the Eglise de la Sainte-Trinité in Paris.

The interior and exterior sculptures are a great attraction to be seen. The 36 stained glass windows contain 30 sections of glass each. Seven varieties of Italian marble were used for the tower and inside visitors can admire the beautiful paintings, marble furniture and a monumental organ.
Image Courtesy of Wikimedia and Pjposullivan.
Sight description based on Wikipedia.
7

Dominicans arrived in Quebec City in 1906, and upon the approval of diocesan authorities opened their first church on Christmas Eve in 1930. But in 1939, after a fire almost destroyed the building, extensive renovations were needed and additions, including a mausoleum, were made as well. The vast symbolism and artistic value of the English neo-Gothic architecture and more than 500 sculptures are notable features of this magnificent church.
Image Courtesy of Wikimedia and Jeangagnon.