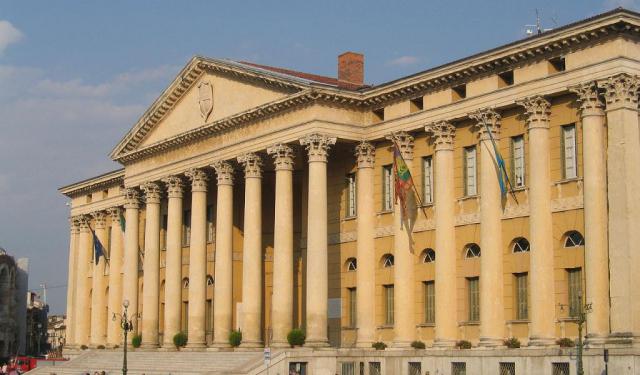 Image by Jakub Hałun on Wikimedia under Creative Commons License.

Verona is a city of palaces, gates, and bridges. Individuals will discover the remains of Roman palaces along with Roman-esque and Renaissance monuments and gates. In a couple of hours, one may stumble upon all the treasures of the Roman age inside Verona and understand why the city is often called "The Gateway of Italy".
How it works: Download the app "GPSmyCity: Walks in 1K+ Cities" from iTunes App Store or Google Play to your mobile phone or tablet. The app turns your mobile device into a personal tour guide and its built-in GPS navigation functions guide you from one tour stop to next. The app works offline, so no data plan is needed when traveling abroad.

Every year thousands of tourists from different corners of the world arrive at Verona with the intention of spending a lot of time at the Palazzo del Mercato Vecchio. It was built in the last decade of the 12th Century. Tourists can enter Cortile Mercato vecchio, the oldest market yard in the city, which includes a beautiful Gothic staircase made of pink marble. Individuals may also enjoy various exhibits and/or free concerts held throughout the year.
Image by Pentti Helenius on Wikimedia under Creative Commons License.
2

Located on Corso Cavour is the majestic and beautiful Palazzo Bevilacqua. It was built by architect and engineer Michele Sanmicheli in the 1530s. The fortress is named after an important Italian noble family. Sanmicheli also designed the Palazzo Pompei, the Palazzo Canossa, the Cappella Pellegrini, and the Ponte Nuovo. The building now serves as the headquarters of the state technical institute of the Ippolito Pindemonte and hosts art collections from Marco Bevilacqua and Veronese operas.

The building reflects the richness and texture of Bramante design. Large and small bays grace the structure while fluting decorates the keystones, cornices, and arches. As you enter the front doors of the palace, you are greeted by a courtyard that leads to the main living quarters. The ground level of the edifice is stone and is divided by low windows and pillars that feature the busts of Roman warriors. The top floor has a large balcony that is decorated with Greek-style ledges.

Other attractions within walking distance of the Via Palazzo include the Villa InCanto Opera Lirica, the Byblos Art Gallery, the Santi Apostoli, the Monumento a Aleardo Aleardi, the Itaca Gallery, the S. Lorenzo, the Museo d'arte, the Astra, and the Arco dei Gavi.

Image by Lo Scaligero on Wikimedia under Creative Commons License.
3

The Porta Leoni, formerly known as the Porta San Fermo and the Arco di Valeria, is an ancient and beautiful Roman gate in Verona that dates back to the first century BCE. It was built by P. Valerius, Q. Caecilius, Q. Servilius and P. Cornelius. The current name comes from a sarcophagus lid that features two lions that is located at the monument of Umberto I near Ponte Navi. The gateway connected to the road which led to Bologna and Aquileia. Today, it is part of the city walls at the end of the Cardo Maximus.

Like most Roman architecture, the Porta Leoni served a decorative and functional purpose. The gate served as an entryway into the city, and required towers for guards and a gallery that allowed passage across the gateway. The white brick and tufa building has a double facade, polygonal towers, and a rectangular courtyard. The upper part of the building features twisted columns. Stone avant-corps were added during the reign of Claudius. Attractions within walking distance of the Porta Leoni include the Chiesa di San Fermo, the Ponte Navi, the Casa di Giulietta, and the Via Mazzini. It is open 24 hours a day seven days a week.

Image by Lo Scaligero on Wikimedia under Creative Commons License.
Sight description based on wikipedia
4

Osteria da Ugo is a nice restaurant with a rich cuisine and it is located not far from Juliet's House, about 200m away. The restaurant is fully air-conditioned and has three rooms. Its interior decoration is very warm and cozy. The menu of the restaurant is typical from the Veneto region, supported by a wide selection of wines. They are mainly produced in the Verona area, and the best wine production of the region is to accompany the restaurant dishes.
Image by avantgarde_w2 on Flickr under Creative Commons License.
5

Italy boasts some of the most beautiful palaces in the world and the Palazzo dei Diamanti, or the Palace of Diamonds, follows in this tradition. The impressive structure was designed by Biagio Rosetti and built in 1495. It is very similar in appearance to the fortress in Ferrara that shares the same name. Like many other buildings, the Palazzo suffered extensive damage from World War II and was renovated in 1950.

The building receives it name from the thousands of white marble diamond-shaped stones, of varying sizes, that cover the exterior of the building. The effect that light has on the multi-faceted outer walls does give one the impression that they are looking at diamonds.

The palace includes a portal that has Doric columns on both sides and two mullioned windows on the main floor. Currently, it is the headquarters of AGEC. The building reflects the influence of designer Michele Sanmicheli.

Ristorante Pizzeria S. Matteo Church is a place where guests can stroll in, order up a glass of vino, and in less than 10 minutes be presented with a bubbling, slightly charred, basil-infused pizza straight out of a wood-burning oven. They also can devour other peppery, chewy, nutty, smoky and phenomenal pizzas.
Image by tuyddatygl on Flickr under Creative Commons License.
7

Verona is one of the best-preserved cities in Europe. At every corner, one can enjoy its art, history, and culture without entering an exhibition hall. One of the most stunning elements of the metropolis are its many gates that the Romans built and used to protect its citizens and to conduct business.

The Porta Borsari is an ancient Roman gate that was built in the first century AD. It was formerly called the Porta Lovia and the Porta San Zeno before receiving its current name. The gate served as a passageway for the Via Postumia.

The original building was brick and contained an inner court. It was rebuilt in 265 and given a limestone facade. The upper part of the gate features 12 arched windows. The Corso Porta Borsari shopping center leads up to the gate.

Other nearby attractions you can enjoy after visiting the gate include the Galleria Officina d'Arte, the Church of Sant'Eufemia, the Foro Romano in Piazza Erbe, the Monumento alle vittime del 1915, La colonna di San Marco, La fontana di Madonna Verona, the Museo d'arte, the Astra, the Torre dei Lamberti, the Fondazione Museo Miniscalchi Erizzo, and the Case dei Mazzanti.

Why You Should Visit:
Easy to find, looks great and makes for some nice photos.

Tip:
While at it, have a look at the leading from it Corso Porta Borsari – one of Verona's most elegant shopping streets.
Image by MM on Wikimedia under Creative Commons License.
Sight description based on wikipedia
8

The Palazzo Canossa is a stone palace that was designed by Michele Sanmicheli in 1527. Although construction began in the sixteenth century, the building was not completed until the seventeenth century. It is located between the Porta Borsari and Castello Scaligero and is a very popular tourist destination. The structure design reflects a Mannerist style. It is one of four buildings that designer built in the city.

Like many structures in the city, the building suffered some damage during World War II. Although frescoes by artist Gian Battista Tiepolo were lost during the bombing of Verona, many other elements remain.

Visitors will enjoy viewing the doorway that is decorated with marble columns, a portico, framed arched windows, and a gallery that is festooned with mythological creatures. Alexander I of Russia, Napoleon Bonaparte, and Francis I of Austria are just a few of the famous visitors who have graced the palace halls.

The palace is located near many interesting sites. Other attractions near the Palazzo Canossa that you can enjoy include the Arco dei Gavi, the Palazzo Scannagatti, the Basilica SS. Apostoli, the S. Lorenzo, the Museo Civico di Castelvecchio, the Byblos Art Gallery, the Palazzo Bevilacqua, and the Ponte Scaligero.
Image by Lo Scaligero on Wikimedia under Creative Commons License.
Sight description based on wikipedia
9

Ponte Scaligero is a three-arch bridge that spans the Adige River. It was built in 1375 or 1376 for the Scaliger family who wanted to use the bridge as an escape route from the Castelvecchio to the river. The architect was most likely Guglielmo Bevilacqua.

The overpass spans 120 meters and connects the city to the road that leads to Tyrol. It is one of the most photographed viaducts in the city and a popular transport path for pedestrians. As with many other structures, the original bridge was destroyed by the Germans during World War II. Fortunately, it was reconstructed in the 1950s using many of the original salvaged parts.

The upper part of the bridge is red brick, while the lower part of it is white marble. Local legend says that Cangrande II della Scala awarded the designer a sword, that belonged to St. Martin, for his efforts. The bridge resembles a small fortress during the day and is absolutely stunning when viewed at night.

Why You Should Visit:
Stunning views up and down the river and some wonderful city skylines to be photographed. A must-see part of medieval Verona.

Tip:
Explore the numerous staircases and ramparts – many great photos can be taken on the fortified walls.
Try to visit by day and again after dark when the bridge is beautifully lit.
Image by Lo Scaligero on Wikimedia under Creative Commons License.
Sight description based on wikipedia

Walking Along the Adige River

The Adige river adds to the romantic ambience of Verona. Near the river's banks, one will find fascinating cloisters, museums, theatres, and gardens which are just a few of the city's well preserved treasures.