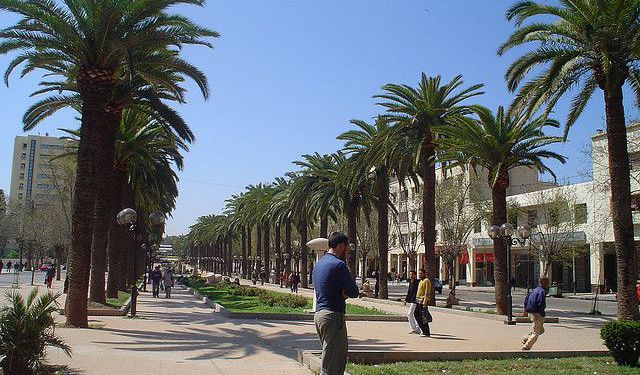 Still, Fez's Ville Nouvelle is as much 'real' Morocco as any donkey-packed lane in the old city. While some find it a bit too modern, even today, with not much going on, for most of the locals and those in the know Ville Nouvelle is indeed quite interesting and progressive product of functional urban planning.

In recent years, this most populated part of the city has had huge sums of money poured into, the benefits of which are now seen along its main artery, Avenue Hassan II, formerly known as Avenue de France. Laden with manicured lawns, tall Moroccan palm trees, flower beds and fountains, this wide thoroughfare is lined on both sides with arcaded buildings, cinemas, numerous eateries, government buildings and hotels.

Following the Avenue, you'll eventually reach the Ensemble Artisanal where, just as its name suggests, you can find lots of local handicrafts offered for sale.

At some point, in Place de Florence, (Florence Plaza, formerly Lyautey), laid out as a garden, the boulevard crosses another major avenue – Mohamed V. Not far off is the Mosquée Imam Malik (Tajamouati), one of the most important mosques in the city. At the northeastern end of Avenue Hassan II lies Place de la Résistance (Resistance Square, originally called Place Gambetta), a large roundabout with a fountain at its center.

To explore these and other attractions in the New Town of Fes in more detail, take this self-guided walking tour.
Image Courtesy of Flickr and kerryvaughan.
How it works: Download the app "GPSmyCity: Walks in 1K+ Cities" from iTunes App Store or Google Play to your mobile phone or tablet. The app turns your mobile device into a personal tour guide and its built-in GPS navigation functions guide you from one tour stop to next. The app works offline, so no data plan is needed when traveling abroad.

The Ville Nouvelle is centered around Avenue Hassan II, a wide boulevard laid out by the French colonial administration after 1912, and known originally as Avenue de France.

A tree-lined park area, along the middle, runs between the lanes for car traffic for approximately 2 km. At the avenue's northeastern end is Place de la Résistance (originally called Place Gambetta), a large roundabout with a fountain at its center. Further south, along the same avenue, lies Place Florence (originally Place Lyautey), a wide plaza planted with trees and originally designed as a public garden. At the southwest end of the avenue is Place Ahmed El Mansour (originally Place Galliéni).

During the colonial period, the main public buildings of the city were erected along and around this main avenue, featuring a mix of Moresque (neo-Moorish or Moroccan), Art Deco, and Neoclassical styles.

On both sides of the avenue there are arcaded buildings, where cinemas, cafes, restaurants, terraces, ice cream parlors and pastry shops are located. Largely a tourist area, it also features grand hotels, like Hotel Barceló, and modern shopping and entertainment centers, such as the Borg Fez Mall and the Qisariya.

The area of Place Ahmed El Mansour is a home to the Fez City Center, an 80-hectare project comprising residences, offices, hotels and shopping centers, close to the Royal Palace.


Image Courtesy of Wikimedia and Robert Prazeres.
Sight description based on Wikipedia.
2

Souks got you down? Tired of haggling, walking in noisy crowds, looking for something but yon don't know what? Take a break. Try the government run Artisanal Ensemble in Fes. The ensemble is located in the new town of Fes, on the Avenue Allah ben Abdullah. It is an artisan cooperative producing goods of leather, copper, iron, pottery and wood.

An Artisanal Ensemble can be found in several cities in Morocco. It is a great place to watch craftsmen at work. Prices are fixed, there is no need for haggling, as in the souks. Visiting the Ensemble is a convenient way to see how the fixed price approach compares with the prices in the old city. In shopping, forewarned is forearmed.

The Ensemble is an exceptional place for scouting up traditional ceramics and pottery. It is easy to watch craftsmen designing and creating pieces. Everyone loves a souvenir.
Image Courtesy of Flickr and }{enry.
3

The new town of Fes, established by the French colonial administration in 1912, was planned around the Avenue Hassan II. At this time Avenue Hassan II briefly underwent a sea change and became Avenue de France. Later it changed back. A parkway runs between the traffic lanes. At the north end is the Place de la Resistance roundabout and fountain.

Going south on the avenue one encounters Florence Plaza (formerly Place Lyautey). The Florence Plaza is a broad tree-planted plaza. Buildings in the area show a mix of neo-Moorish, Art Deco and Neoclassical styles. On the south side of Florence Plaza is the Bank al-Maghrib, built in 1931 by architect Rene Canu.

On the east side, on Avenue Hassan II, is the Central Post Office building. The first post office was built in 1927 by architect Edmond Pauty. It was enlarged in 1947 by Emile Toulon. The Court of Appeals building, just south of the post office, was constructed in 1936.

The designers of the square were inspired by the form of the Baptistry of San Giovanni in Florence, Italy.
Image Courtesy of Wikimedia and Robert Prazeres.
4

An architectural gem in the heart of Morocco's spiritual capital, Mosquée Imam Malik is found near Kennedy Plaza, and is commonly referred to by locals as "Tajamouâti", after its benefactor, Abdel-Hadi Tajmouati, who financed the construction.

This house of prayer is easily one of the most gorgeous and biggest ones in the city (second only to the Quaraouiyine in the Medina) and is fit to accommodate up to 4,000 worshipers.

The mosque opened its doors for the first time during Ramadan, on February 4, 1994, after ten years of construction. Renowned for its modern design, the building nonetheless has retained the ancient architectural character typical of Moroccan mosques. It has four main portals, one of which is reserved for women. Inside, there are rooms of ablutions and other amenities.

Quite busy during a day with regular service, as evidenced by the large crowds at each call to prayer, the Imam Malik mosque also acts as a place of religious education between Al Maghrib and Al Ichae prayers.
Image Courtesy of Wikimedia and Robert Prazeres.
5

Place de la Résistance or Resistance Square, formerly known as Plaza Lafayette (originally Place Gambetta), is a crossroads between the New Town and old Medina in Fes, and is a lovely tourist site in its own right.

The square consists of a large roundabout with a vast fountain in the center. The fountain is programmed to make the water “dance” in unity with musical rhythms, sequencing rises and falls, and accompanied by lighting which is activated during the night, adding a great deal of romantic character to the whole scene. The latter, in large part, explains the fountain's popularity with the locals, especially wedding parties, who visit here often to take pictures.

About 150 m towards the Medina, right after the McDonald's, is the Borj Fez – a shopping center extended over three levels. Inside there are 60 stores, a Carrefour hypermarket, food court, children’s playground, and an underground parking lot.
Image Courtesy of Wikimedia and Robert Prazeres.