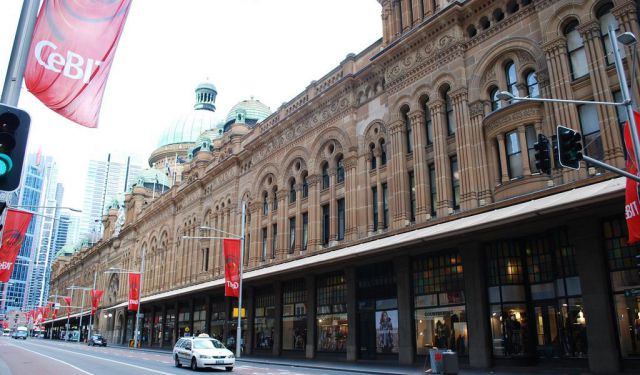 Image by Alpha on Flickr under Creative Commons License.

Shop till you drop in Sydney’s central business district. Within a few city blocks you will find super swish arcades and malls that are filled with top designer names and global brands.

Venture into the Queen Victoria Building which was built in 1898 and has been restored to its former glory. There are several levels of shops and among them are such Australian favorites as Country Road and Camper. This beautiful complex is an attraction in its own right with lots of stained glass windows, balustrades, a 19th-century staircase and a magnificent dome.

Another delightful historic shopping complex is the Strand Arcade where you’ll find gourmet foods, jewelry and clothing. This Victorian-style building first opened its doors to eager shoppers in 1892. It is situated on Pitt Street, a long thoroughfare that runs through the city center and is home to many more retail centers, including the Glasshouse, the Sydney Arcade and the Mid City Shopping Center.

Among the best places to go for the latest designer outfits are Sydney Central Plaza and Westfield Sydney. Other popular shopping destinations in the central business district are Jimmy Choo, Chanel, Giorgio Armani, Tiffany & Co, Dior and Bulgari to name but a few of the world's most prestigious brands that are sited here.
How it works: A discovery walk features a route using which you can explore a popular city neighborhood on your own. This walk, along with other self-guided walks in over 1,000 cities, can be found on the app "GPSmyCity: Walks in 1K+ Cities" which can be downloaded from iTunes App Store or Google Play to your mobile phone or tablet. The app's built-in GPS navigation functions allow following this walk route with ease. The app works both online and offline, so no data plan is needed when traveling abroad.