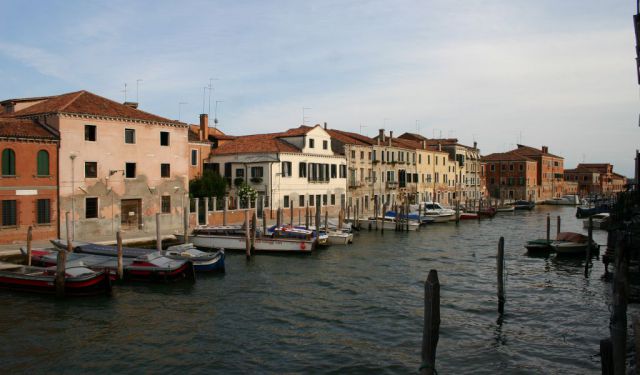 Giudecca Island is a long thin island that is actually made up of eight interconnected small islands, and is situated in the Venetian Lagoon. It is something of a romantic idyll that attracts many young couples. With old squares, churches and wonderful views of the sea and of St. Mark's Basin it is easy to see why many artists are also drawn to Giudecca. The area has a burgeoning reputation as a hub of artistic activity.

A lovely place to visit is the waterfront or fondamenta, alongside the Giudecca Canal. It is lined with numerous restaurants, cafés and art galleries. You will also find small supermarkets and delicatessens here. Among the refurbished buildings and old palazzos on Giudecca, one structure stands out in particular, and that is Il Redentore. This striking looking white church and its dome have dominated the island's skyline for more than 500 years. Italian architect Andrea Palladio was inspired by Roman designs and the church was built as way of saying thank you for the end of a plague that had decimated part of Venice's population. Venture inside to study some of its magnificent paintings, including works by 16th and 17th-century painters, such as Francesco Bassano, Iacopo Nigreti and Paolo Veronese.
Image Courtesy of Wikimedia and Giovanni Dall'Orto.
How it works: A discovery walk features a route using which you can explore a popular city neighborhood on your own. This walk, along with other self-guided walks in over 1,000 cities, can be found on the app "GPSmyCity: Walks in 1K+ Cities" which can be downloaded from iTunes App Store or Google Play to your mobile phone or tablet. The app's built-in GPS navigation functions allow following this walk route with ease. The app works both online and offline, so no data plan is needed when traveling abroad.