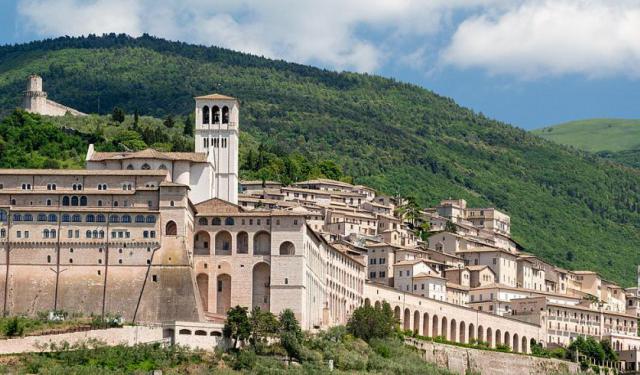 Sitting high on the hills in the Italian region of Umbria, the town of Assisi made history in the 12th century as the birthplace of St. Francis, one of the key saints of the Catholic world. Attesting to this fact is the magnificent Basilica of St. Francis dominating the city center and housing the crypt with the saint’s remains. To see this and other religious and architectural sights of Assisi, follow this orientation walk.
How it works: Download the app "GPSmyCity: Walks in 1K+ Cities" from iTunes App Store or Google Play to your mobile phone or tablet. The app turns your mobile device into a personal tour guide and its built-in GPS navigation functions guide you from one tour stop to next. The app works offline, so no data plan is needed when traveling abroad.

The Piazza del Comune, located on the site of the ancient Roman Forum, is considered one of the most representative medieval Umbrian urban realizations. Dominated by the imposing Rocca Maggiore , the rectangular square begins at the end of Corso Mazzini which links it to the Basilica of Santa Chiara .

Piazza del Comune is an amazing shopping spot in Assisi, where you will find such interesting stores as Mondo T-Shirt, Marini Souvenir and Kéramos. Here you will find cool t-shirts, nice souvenirs and gifts, as well as wonderful Umbrian and Italian ceramics, textiles and tapestries.

Image by Georges Jansoone on Wikimedia under Creative Commons License.
2

Torre del Popolo is situated in the center of the city, on Piazza del Popolo, and displays a beautiful tower and historic landmark. Its construction dates back to the second half of the thirteenth century, while the clock was installed in the mid-fifteenth century.
Image by Berthold Werner on Wikimedia under Creative Commons License.
4

Palazzo del Capitano del Popolo is situated in the heart of the city and represents the first public building established in Piazza del Comune. This prominent city’s landmark and historic building was erected between 1212 and 1305. Today it is home to the City Hall and art gallery.
Image by Berthold Werner on Wikimedia under Creative Commons License.
5

Teatro Metastasio is located in the central part of Assisi, on Piazzetta Verdi. This wonderful venue holds 430 seats and is open all year; here you can enjoy the finest local performances and cultural events in the charming atmosphere.
Image by David Faulks under Creative Commons License.
6

The Municipal Art Gallery or Pinacoteca Comunale contains a big number of paintings from the 14th to the 17th century. It is housed in the 17th century Palazzo Vallemani. Artists represented in the collection include Giotto, Andrea d'Assisi, Puccio Cappana, with the frescoes often featuring a definite Bynzantine and Umbrian influence. It is situated in the heart of Old Town Assisi and next to the Piazza del Comune.
Image by Bob Sundahl on Flickr under Creative Commons License.
7

7) Basilica of St. Francis of Assisi (must see)

The Papal Basilica of St. Francis of Assisi is the mother church of the Roman Catholic Order of Friars Minor, commonly known as the Franciscan Order in Assisi, the birthplace of St. Francis. The burial place of St. Francis, the basilica, is one of the most important sites of Christian pilgrimage in Italy. The basilica, which was begun in 1228, is built into the side of a hill and comprises two churches known as the Upper Church and the Lower Church, and a crypt where the remains of the saint are interred. With its accompanying friary, the basilica is a distinctive landmark to those approaching Assisi. It is a UNESCO World Heritage Site since 2000. The interior of the Upper Church is important as an early example of the Gothic style in Italy. The Upper and Lower Churches are decorated with frescoes by numerous late Medieval painters from the Roman and Tuscan schools.
Image by Georges Jansoone on Wikimedia under Creative Commons License.
Sight description based on wikipedia
8

Monastery of San Pietro or St. Peter’s Abbey is situated on San Pietro Piazza. Originally built by the Benedictines in the tenth century, the church was restored in 1954 and presents beautiful Romanesque–Gothic style. This striking religious building houses six tombs and fine frescoes of the fourteenth-fifteenth centuries.
The Abbey undergrounds house a museum. Built on the Roman ruins, these older rooms are used for exhibitions. Of local importance is the Well of Martyrs where the bodies of San Vittorino and companions were thrown. The museum displays a collection of art that includes ceramic works of Italian and foreign artists on the theme "St. Francis and the Nativity in contemporary art".
Image by Gunnar Bach Pedersen on Wikimedia under Creative Commons License.
Sight description based on wikipedia
9

The Church of Santa Maria Maggiore is situated between Piazza del Vescovado and Porta Moiano. The church was originally founded in the 10th century, while the present building dates back to the 12th century. Beautiful frescoes from the 14th and 15th centuries and a late Medieval, 9th century sarcophagus are still preserved here.
Image by David Faulks under Creative Commons License.
10

Located just a few steps from Chiesa Nuova, in the heart of the Assisi’s historic center, Casa Natale di San Francesco is the original house of Saint Francis of Assisi. This prominent Italian deacon and the initiator of the Italian literary tradition was born here on July 5, 1182.
Image by Sergio Andrés Madera on Flickr under Creative Commons License.
11

The Basilica of St. Clare of Assisi (Santa Chiara Basilica) was established between 1257 and 1265 and represents fine Italian Gothic style. Its exterior features pink and white stones, as well as massive supporting arches. Inside the church you will find precious frescoes, dating back to the XIIth to XIVth centuries.
Image by Georges Jansoone on Wikimedia under Creative Commons License.
14

The Diocesan Museum and Crypt of St Rufino or Museo Diocesano e Cripta is situated in Palazzo dei Canonici, near the Cathedral of San Rufino. The museum was founded in 1941 by bishop Placido Nicolini, and displays frescoes of the thirteenth century, liturgical vestments, sacred vessels, sarcophagus of the third century A.D., paintings and other precious exhibits.
Image by Georges Jansoone on Wikimedia under Creative Commons License.
15

Image by Georges Jansoone on Wikimedia under Creative Commons License.
Sight description based on wikipedia
16

The Major Fortress or Rocca Maggiore is one of the most prominent landmarks of Assisi. It was restored for several times. Dating back to ancient times, it is situated on the city’s hill, providing dazzling views. This former military structure often hosts exhibits and art shows.
Image by Berthold Werner on Wikimedia under Creative Commons License.