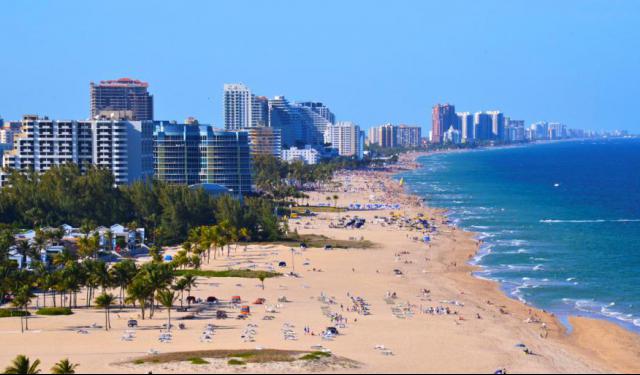 Image by Daniel Dudek on Flickr under Creative Commons License.

Fort Lauderdale, dubbed the “Venice of America”, is one of Florida's most attractive cities with lots to offer any visitor, including navigable canals and gorgeous beaches. A top destination for both spring and summer vacations, with one of the most popular things to do being a long walk along the city's ocean line. This beach walk has got all the activities and attractions that make up the Florida lifestyle.
How it works: Download the app "GPSmyCity: Walks in 1K+ Cities" from iTunes App Store or Google Play to your mobile phone or tablet. The app turns your mobile device into a personal tour guide and its built-in GPS navigation functions guide you from one tour stop to next. The app works offline, so no data plan is needed when traveling abroad.

The Dr. Willard Van Orsdel King House is a historic U.S. home located at 1336 Seabreeze Boulevard. On February 21, 2006, it was added to the U.S. National Register of Historic Places.

Dr. King was a world renowned Entomologist, specializing in mosquito control. Dr. King received his Doctorate from Tulane University in 1915. He is credited with being the first person to use aerial spaying to control mosquito populations and reduce the spread of mosquito-transmitted diseases. He was head of mosquito operations at the Orlando Lab when he joined the US Army Medical Corps in 1942, and was discharged in 1945 with the rank of Colonel. He was awarded the Legion of Merit for meritorious service. He married Leila Menere Kepert in 1944 in Sydney, Australia, and they moved back to Orlando until 1953, when Dr. King retired from the Orlando Lab and moved to 1336 Seabreeze Blvd, where he continued as a consultant for all mosquito issues, until his death in March 1970.

Image by Ebyabe on Wikimedia under Creative Commons License.
Sight description based on wikipedia
2

The Wreck Bar and Lounge, located inside the Sheraton Yankee Clipper Hotel, is a must see venue in Fort Lauderdale, where you're sure to have a great night of relaxing live entertainment. Their famous “Underwater Dancing Mermaids” show features extraordinary dancers performing underwater behind glass. There's also some cool music and a nice selection of moderately priced drinks.
Image by Kjersti Magnussen on Flickr under Creative Commons License.
3

The Bahia Mar Marina is one of Fort Lauderdale's must see attractions. This marina bay is filled with luxury yachts and other boats that can take visitors to many different destinations using Fort Lauderdale's canals. This nautical paradise is also located near the South Beach, a popular walking and recreational area.
Image by bbhart on Flickr under Creative Commons License.
4

4) Swimming Hall of Fame (must see)

The International Swimming Hall of Fame and Museum (ISHOF) is a history museum and hall of fame, located at One Hall of Fame Drive, Fort Lauderdale, operated by private interests serving as the central point for the study of the history of swimming in the United States and around the world.

Exhibits include ancient art and both reproductions and original art depicting famous moments in swimming history (from ancient times to modern), swimwear, and civil rights, as well as memorabilia and artifacts belonging to persons who have promoted or excelled in aquatics. It is recognized by FINA (Fédération Internationale de Natation) as the official hall for the aquatics sports.

Image by Hajor on Wikimedia under Creative Commons License.
Sight description based on wikipedia
5

Established in 1938, The Elbo Room is a legendary live music bar. Popular with students on Spring break, it's known around the country after numerous movie appearances, including the award-winning “Where The Boys Are” movie from 1960. The living memory of the club is represented by displays of customer photos from down the years.
Image by MattHurst on Flickr under Creative Commons License.
6

The Las Olas Beach Club, formerly the Lauderdale Beach Hotel, is an elegant Art-Deco landmark on the city's beachfront. Designed by Roy France and built in 1936, it was Fort Lauderdale's first beach hotel and was a very popular place for visitors to stay. The hotel's construction spearheaded the beach area's development after the Great Depression and the disastrous hurricane of 1926. In 2001, along with the rest of the city's westside beachfront developments, the hotel was redeveloped to include a 28 story tower. However the beachfront's northern, southern, and eastern areas remain practically untouched.
Image by neighborhoods.org on Flickr under Creative Commons License.
7

The Beach Place, located at the intersection of Fort Lauderdale Beach Boulevard and Cortez Street, is a popular spot with visitors to the city. Home to shopping, dining, and musical performances, this area has something to entertain you at any hour of the day.
Image by saiberiac on Flickr under Creative Commons License.
8

The Parrot Lounge is one of a few relaxed lounges on the strip that is much loved by locals. This reasonably priced club is the quintessential place to go if you want to spend time with friends, grab some snacks, have a few drinks, see a sports game, or listen to some live music by local rock bands.
Image by Peter Boehi under Creative Commons License.
9

The Bonnet House (also known as the Bartlett Estate) is a historic home in Fort Lauderdale located at 900 Birch Road. On July 5, 1984, it was added to the U.S. National Register of Historic Places. It is named after the Bonnet Lily.

The property was originally acquired in 1895 by Hugh Taylor Birch, a successful Chicago lawyer, and given to his daughter Helen and her husband, artist Frederic Clay Bartlett, as a wedding gift in 1919. Bartlett built a plantation-style home on the property and wintered there with his wife and child from a previous marriage, Frederic Jr, until Helen died in 1925. Bartlett then married Evelyn Fortune Lilly, ex-wife of Eli Lilly, and they continued to use the home as a winter residence until his death in 1953 and hers in 1997. She deeded the property in 1983 to the Florida Trust for Historic Preservation, which maintains the property as a historic house museum called the Bonnet House Museum & Gardens.

This place served as the finish line for the seventh season of the hit CBS reality show The Amazing Race. In May, 2008 The National Trust for Historic Preservation listed the building on their list of America's Most Endangered Places.

This trendy lounge club is one of the best places around to relax and cool off after a crazy night on the dance floor. This late night club has live performances with all the best acoustic and electronica tunes, plus a great bar that's got plenty of tasty cocktails. Blue Martini has also a comfortable VIP Lounge and some nice appetizers. Bear in mind there's a strict dress code in place and only those 21 and over are allowed.
Image by pmow on Flickr under Creative Commons License.