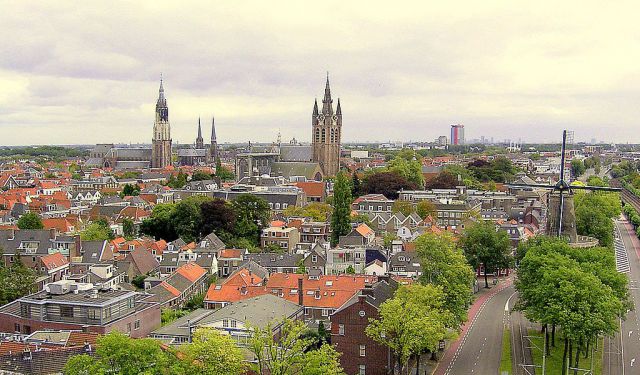 Image by Boserma on Wikimedia under Creative Commons License.

Delft is a beautiful medieval town with numerous old buildings, each with a long and interesting story. This typical Dutch city with canals and numerous bridges offers an exciting journey into the past. Take this self-guided walking tour to see the city’s most prominent landmarks.
How it works: Download the app "GPSmyCity: Walks in 1K+ Cities" from iTunes App Store or Google Play to your mobile phone or tablet. The app turns your mobile device into a personal tour guide and its built-in GPS navigation functions guide you from one tour stop to next. The app works offline, so no data plan is needed when traveling abroad.

The Market in Delft with is one of the largest historic market squares in Europe. This square holds regular markets and events, contains the city hall and Nieuwe Kerk buildings and is a great place to enjoy a meal or a drink.
Image by Michiel1972 on Wikimedia under Creative Commons License.
2

The City Hall in Delft is a Renaissance style building on the Markt across from the Nieuwe Kerk. It is the former seat of the city's government, and still today the place where residents hold their civic wedding ceremonies. Originally designed by the Dutch architect Hendrick de Keyser, it was heavily changed over the centuries and was restored in the 20th century to its Renaissance appearance.

In the town hall from 1618 are some group portraits, and portraits of the counts of Orange and Nassau, including several by Michiel van Mierevelt, one of the earliest Dutch portrait painters, and with his son Pieter, a native of Delft. The oldest part of the complex is the tower covered in "Gobertanger" limestone from Wallonia, a building material used often in important renaissance buildings in the Netherlands up to 1600. The tower, called "De Steen" or "The Stone", was originally built around 1300 and has decorative clockfaces from 1536 and the bells were made by Hendrick van Trier and Francois Hemony. The facade has a "Justitia" statue. Up the stairway and immediately behind the heavy wooden entrance doors is the Vierschaar, with a decorative painting of the Judgment of Solomon by Pieter van Bronckhorst.

Image by Malis on Wikimedia under Creative Commons License.
Sight description based on wikipedia
3

Nieuwe Kerk is a landmark Protestant church in Delft. It is located on Delft Market Square (Markt), opposite to the City Hall (Dutch: Stadhuis). In 1584, William the Silent was entombed here in a mausoleum designed by Hendrick and Pieter de Keyser. Since then members of the House of Orange-Nassau have been entombed in the royal crypt. The latest are Queen Juliana and her husband Prince Bernhard in 2004. The private royal family crypt is not open to the public. The church tower is the second highest in the Netherlands, after the Domtoren in Utrecht.

The New Church is the burial place of the princes of Orange. It is remarkable for its fine tower and chime of bells, and contains the splendid allegorical monument of William the Silent and the tomb of Hugo Grotius. The tower was built 1396-1496 by Jacob van der Borch. The monument for Hugo de Groot was made in 1781. The mechanical clock has 18 bells by Francois Hemony from 1659 and 30 modern bells. In the church tower there is a bell from 1662 by Francois Hemony with a diameter of 104 centimeters. In the tower there are also bells no longer in use, including 13 from 1659 by Francois Hemony, 3 from 1678 by Pieter Hemony, 3 from 1750 from Joris de Mery, and 1 from Gillett and Johnston from 1929.

Image by Microtoerisme on Wikimedia under Creative Commons License.
Sight description based on wikipedia
4

De Beestenmarkt is a square that was created by the demolition of the Minderbroederklooster. Especially in summer, the Beestenmarkt is an important entertainment center. The square is used annually for a skating rink. In the middle of the square stands the "Bull", a earthenware work of art by Rob Brandt.
Image by leo.laempel on Flickr under Creative Commons License.
Sight description based on wikipedia
5

Jesse De Maria Church is a Roman Catholic and a part of St. Ursula Parish built at the end of the 19th century. It was designed by Evert Margy in neo-Gothic architectural style. Originally, the church was erected in honor of St. Joseph. This church was the first Catholic place of worship established in the town center after the Reformation. The church's two beautiful towers symbolize two historical religious eras.
Image by M.Minderhoud on Wikimedia under Creative Commons License.
6

Vermeer Center is a popular cultural venue named after a prominent Dutch artist who was born in Delft in 1632. Johannes Vermeer lived and worked in Delft during Dutch Golden Age. Housed in a historic St. Lucas Guild building, the Center offers a journey into the artist’s life, offering striking exhibitions of paintings. Each painting has a special story attached to it. There is also a studio here, which explores Vermeer's approach to work.

The national monument of Koornbeurs House is one the oldest buildings in Delft. In the 13th century a trade-storage building was erected here. In the middle of the 17th century its wooden hall was replaced with the current stone structure and from 1870 it became a corn exchange building from which it gained its name. Designed by Hendrik Swaef, Koornbeurs House is one of the few Dutch Classicist constructions in the city.
Image by Cunic on Wikimedia under Creative Commons License.
8

De Waag Building is a lovely old house in Delft located behind the town hall on the western side of the town market. The old structure of this prominent landmark house was remodeled after the great fire of 1536. The complex included a theater arena and was used as a cultural venue until 1960. Since 1999 it has been home to De Waag City Café.
Image by Michiel1972 on Wikimedia under Creative Commons License.
9

The church possesses three pipe organs, from the years 1857 (main organ), 1873 (north aisle) and 1770 (choir). The most massive bell in the tower, cast in 1570 and called Trinitasklok or Bourdon, weighs nearly nine tonnes, and because of its strong and potentially damaging vibrations, is rung only on such special occasions as the burial of a Dutch royal family member in the nearby New Church. The massive bell is also sounded during disasters, when local air-raid sirens are sounded. This, however, does not happen during the siren's monthly, country-wide test, which happens every first Monday of the month.

Museum Lambert van Meerten is located in the former home of Meerten Lambert van Delft, who collected art and antiques. In October of 1909 the museum was opened to the public for the first time. The neo-Renaissance interior of the museum is represented in a large number of spots such as windows, friezes, consoles and furniture items which have been collected from other houses in Delft. One of the important building features is the 16th century carved archway and a group of 16 carved window pillars and balusters. Here visitors can also see Lambert van Meerten's collections of paintings, famous blue and white Delftware, Chinese porcelain, Holland tiles and many more.

Another famous landmark of the city is Windmill ‘de Roos”- the last standing mill out of the total of fifteen to have dominated Delft in the medieval era. The windmill is a traditional symbol of Holland, marking the historical importance of its countryside. The 14th century windmill was replaced by much higher stone constructions in the 18th century. In 1990s the mill was thoroughly restored and today is open for public viewing.
Image by M.Minderhoud on Wikimedia under Creative Commons License.
12

Settled in the 15th century former monastery of Saint Agathaklooster, Museum Het Prinsenhof is another museum worth visiting. The monastery was occupied by Stadtholder William of Orange (also known as William the Silent). The museum focuses on exhibits where visitors can see and learn about history and life in Delft during the Dutch Golden Age. Collections include art paintings, handicrafts, silver items, pottery, portraits and tapestries. The story of William of Orange can also be seen through the fascinating collections and exhibitions of pamphlets, prints, caricatures, paintings and others. In 1584 William was killed on the stairs, and bullet holes can be still seen on the stone wall.

A Gemeenlandshuis, or Waterschapshuis is a building that is the headquarters of one of the Waterboards of the Netherlands. Early flood control is often called the Teerschouw, which loosely translated means "consumption during observation". This technique was a periodic check of the local dike system by the Dike-reeve and his men. If they found a problem, they would simply go to the nearest house or inn, and stay there for free until the problem was fixed. This was a fairly direct and simple form of water management. These measures were rarely necessary, since the local people took water management very seriously. The Dike-reeve and his men mostly met to discuss major issues and water improvements, and though they met at each other's homes until the 16th century, as the country grew and the water management issues became more complex, halls were purchased to meet each other regularly.

The Water Boards became governing bodies much like a town hall became a meeting place for the city council. In most Dutch cities, especially those on a river or located at a seaside port, the Gemeenlandshuis was the same size as the Town Hall. Examples can be seen today in Leiden, home to the Gemeenlandshuis van Rijnland, and Delft, home to the Hoogheemraadschap van Delfland.

The oldest canal line is the Oude Delft (Old Canal) and the city has expanded around it over the past 750 years. Here you can find a variety of shops and restaurants that will surprise you.
Image by Sjaak Kempe on Flickr under Creative Commons License.