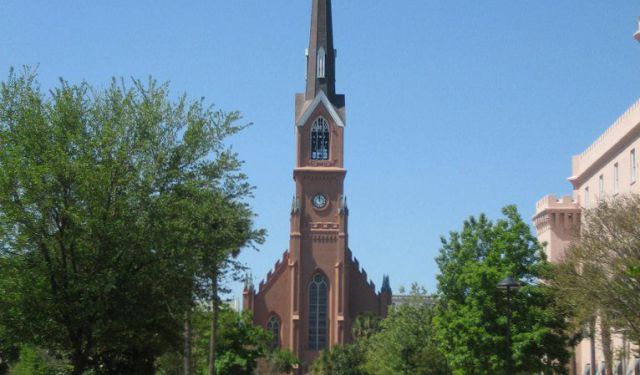 Charleston is also sometimes called the Holy City. That is because it is the home of a large number of churches. The city has many outstanding and fascinating religious structures. Take this self guided walk to see the most popular churches in Downtown Charleston.
Image Courtesy of Flickr and BlancheK.
How it works: Download the app "GPSmyCity: Walks in 1K+ Cities" from iTunes App Store or Google Play to your mobile phone or tablet. The app turns your mobile device into a personal tour guide and its built-in GPS navigation functions guide you from one tour stop to next. The app works offline, so no data plan is needed when traveling abroad.

The Charleston architectural firm Jones & Lee designed the building and construction of the church at 328 Meeting St. began in June 1855. The new building was opened on November 23, 1856. A hurricane in 1885 blew over the original steeple and a year later, the 1886 Charleston earthquake damaged the tower. The tower was repaired and a steeple designed by the Boston, Massachusetts architect Edward Silloway was installed.

Following Hurricane Hugo, which blew the steeple off of the church, it was rebuilt at 210 feet, shorter than the steeple of St. Matthew's across Marion Square; the choice was to avoid a race for the tallest steeple. In April 1951, an educational building was added to the campus. The church was the first in Charleston to televise its services, doing so for more than 40 years until ending the practice in 1998. Seven churches have been created under the auspices of Citadel Square Baptist Church including the Emma Abbott Memorial Chapel.

Image Courtesy of Wikimedia and Ymblanter.
Sight description based on Wikipedia.
3

The church, built in the Jeffersonian style is the fourth oldest church structure in the city. It was built in 1809 by James and John Gordon. The brothers were both the builders and the architects. The church's steeple was not completed due to structural issues that developed in its tower. The church bell was given to the Confederacy in 1862 for use as cannon metal. Before the Civil War, the galleries were used by the church's more than 200 black members. The sanctuary was completely renovated after a fire in 1959. Situated on one of the highest points in the city, the church appeared on mariners' maps as "Flynn's Church," so called after the first pastor.

The Classic Revival sanctuary is stuccoed brick with two tiers of windows, a square tower with an octagonal belfry, and a tetra Tuscan portico. The size of the sanctuary presented a problem because it strained the voices of the ministers. Therefore, in 1833 the floor was raised three feet, the ceiling lowered sixteen feet, and the rear wall of the nave moved to enlarge the vestibule. In addition, side doors on the north and south were closed and pews were added. The pews used today were installed in 1849. Church pews were rented with the rental fee also purchasing a space in the cemetery plot. This custom ended in 1924, but the numbers on the pews remain.

The church has been restored numerous times since over the years, but it still keeps its charm.

Constructed in 1859, the New Tabernacle Fourth Baptist Church is a prime example of Gothic Revival architecture in Charleston. It was initially used by the St. Luke's Episcopal congregation in the Mazyckborough-Wraggborough neighborhood.

The church was built in a Greek cross layout, but the planned steeple was never completed. Inside the building, soaring Gothic vaults resting on quatrefoil columns support the central 55-foot ceiling. The galleries are decorated with Gothic style spindle work and quatrefoil center panels.

The building, despite being damaged by shelling and stripped by Union troops during the Civil War, was used continuously by the St. Luke's congregation until 1949 when it was merged with St. Paul's in Radcliffeborough and became the Cathedral of St. Luke. The New Tabernacle Fourth Baptist Church, founded in 1875, purchased the Cathedral of St. Luke in 1950. Most of the detailed elements of St. Luke's Church have been preserved despite the change in congregation.

Today the New Tabernacle Fourth Baptist Church is not only a beautiful sight and a religious place with regular services, it is also a place for various, interesting community and cultural activities like concerts, festivals and other events that are hosted here.
Image Courtesy of Flickr and BlancheK.
5

The Emanuel African Methodist Episcopal Church, often referred to as Mother Emanuel, is a church in Charleston that serves the African American community in the city since 19th century.

Built in 1891, Emanuel AME Church has one of the few well-preserved historic church interiors in the area, with original features including the altar, communion rail, pews, and light fixtures. A pipe organ was installed in 1902. The church has a capacity of 2,500, making it among Charleston's largest black churches. It was listed on the National Register of Historic Places in 2018.
Image Courtesy of Wikimedia and EvanGuthrie.
Sight description based on Wikipedia.
6

The building of the St. John's Reformed Episcopal Church was constructed 1850 and modifications carried out in 1887. The original church on this site served slave and free black Presbyterians, Irish Catholics, and, later African American Reformed Episcopalians.

The black Presbyterians constructed the building as the Anson Street Chapel for the black members in community. The church building was heavily damaged by shells in the siege of Charleston and it was repaired in 1866. The chancel, roof, and interior were rebuilt, and transepts, a Gothic ceiling, and 14 stained glass windows were added in 1883.

St. John's Reformed congregation acquired the property in early 1970s and has occupied it since then. The St. John's congregation has retained most of the structure's interior features, including stenciled decoration and gilded Gothic elements.

Today St. John's Reformed Episcopal Church still has its old charm and is very active within the community.
Image Courtesy of Flickr and BlancheK.