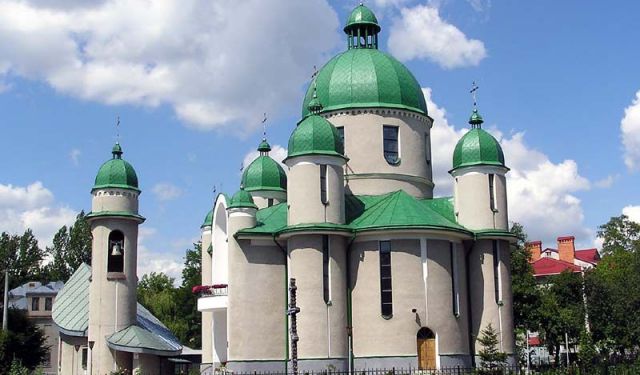 Lviv is an old beautiful city with many churches in impressive buildings with majestic interiors. Some of the churches are architectural monuments listed as UNESCO World Heritage Site. Take this self-guided tour to see the most beautiful churches of Lviv.
Image Courtesy of Wikimedia and Jurij Skoblenko.
How it works: Download the app "GPSmyCity: Walks in 1K+ Cities" from iTunes App Store or Google Play to your mobile phone or tablet. The app turns your mobile device into a personal tour guide and its built-in GPS navigation functions guide you from one tour stop to next. The app works offline, so no data plan is needed when traveling abroad.

1) Bernardine Cathedral and Monastery (must see)

The Bernardine church and monastery in Lviv is located in the city's Old Town, south of the market square. The monastery and the Roman Catholic church of St. Andrew (today the Greek Catholic church of St. Andrew) now belong the Order of St. Basil the Great. In the 17th century the present-day church and monastery were constructed in the style of Italian and Dutch mannerisms. In 1733 the square belfry was added to the complex and in 1736 a monument to Saint John of Dukla, who died in the monastery in 1484, was built in front of the church. The interior was refurbished in the Baroque style in the years 1738 to 1740.
Image Courtesy of Wikimedia and Janmad.
Sight description based on Wikipedia.
2

2) Chapel of the Boim Family (must see)

The Chapel of the Boim Family is a small shrine located just outside the Latin Cathedral, in what used to be known as the Chapter Square. Built between 1609 and 1615, the chapel was originally located in what used to be the city's main cemetery. Founded by merchants Jerzy Boim and his wife Jadwiga Niżniowska, the Boim chapel was finished by their son, Paweł Jerzy Boim. Attributed to Andrzej Bemer, the chapel is among the prime examples of mannerist architecture in Central Europe. It bears strong resemblance to the Sigismund's Chapel at the Wawel Cathedral in Kraków.
Image Courtesy of Flickr and bazylek100.
Sight description based on Wikipedia.
3

The Arch-cathedral Basilica of the Assumption of the Blessed Virgin Mary, usually called simply the Latin Cathedral, is located in city's Old Town, in the southwestern corner of market square. In 1360 King Casimir III of Poland founded the construction of the present day church, built in Gothic style. Construction work continued throughout the 15th century and in 1481 the Cathedral was finally consecrated. In the years 1761 to 1776 the Cathedral was refurbished in the Baroque style and a tall bell tower was added. In 1776 the icon of the Mother of God held in the Cathedral was crowned and placed in the main altar. Between 1892 to 1898 the presbytery was remodeled in the Neogothic style and stained glass, designed by Józef Mehoffer and Jan Matejko, was installed. In 1910 the Cathedral was granted the status of a minor basilica by Pope St. Pius X.
Image Courtesy of Wikimedia and Alex Zelenko.
Sight description based on Wikipedia.
4

The Jesuit Church in Lviv is dedicated to Sts. Peter and Paul. When constructed during the 1610 and 1620s, it was one of the largest churches in the Polish-Lithuanian Commonwealth. Sebastian Lachmius, a monk, based his design for the church on that of Il Gesu in Rome. His designs were modified by a professional Italian architect, Jacopo Briano, between 1618 and 1621. A curious addition to the original design was the 80-meter clock tower on the south side which used to be the tallest building in Galicia. The upper part of this early 18th-century tower was demolished in 1830. In 1740, the vaults were frescoed by the Eckstein brothers from Brno.
Image Courtesy of Wikimedia and Daniel Baránek.
Sight description based on Wikipedia.
5

The Armenian Cathedral of the Assumption of the Blessed Virgin Mary is located in the city's Old Town. A small Armenian church was built in the years 1363 to 1370, founded by an Armenian merchant from Caffa. It is said to have been modeled after the Cathedral of Ani in the ancient Armenian capital of Ani. The Cathedral owes most of its present-day look to a remodeling carried out during the years 1908 to 1927. Just north of the Cathedral lays a small convent of Armenian Benedictines and to the south, adjoining the bell tower, the palace of the Armenian Archbishops, both built in the late 17th century. The present-day interior is largely the work of Jan Henryk Rosen and Józef Mehoffer. The cathedral holds two icons of St. Gregory the Illuminator and the Mother of God, brought in the 17th century from Yazlovets.
Image Courtesy of Wikimedia and Varga Attila.
Sight description based on Wikipedia.
6

The Dominican church and monastery is located in the city's Old Town. It was originally built as the Roman Catholic church of Corpus Christi, and today serves as the Greek Catholic church of the Holy Eucharist. In 1749 Józef Potocki laid the cornerstone for the present-day Baroque church. The church was consecrated in 1764 by the Latin archbishop of Lviv Wacław Hieronim Sierakowski. The Dominicans managed to safely survive through the reign of the Austrian emperor Joseph II, who closed many other monasteries. In 1865 a neo-baroque bell tower was added to the complex. In the years between 1885 and 1914 a controversial renovation of the façade and interior was carried out. The church resembles the church of St. Charles Borromeus in Vienna and is built on the plan of the Greek Cross inscribed in an ellipsoid and topped with a monumental dome.
Image Courtesy of Wikimedia and Maciej Szczepańczyk.
Sight description based on Wikipedia.
8

The Carmelite Church in Lviv was first mentioned in 1634 as the church of the monastery of the Barefoot Carmelites. In 1748 it was the scene of a notorious scuffle ("monomachia") between the Carmelites and their neighbours, the Capuchins. The suburban location caused the church to be rather well fortified, yet it was ravaged by the Cossacks in the Khmelnytsky Revolt and the Swedes in the Great Northern War. The entire façade was redesigned in the 19th century. Still, the building retains much of its original character and design, attributed to architect Jan Pokorowicz. Especially noteworthy are the 300-year-old black marble altar and a series of frescoes executed in the 1730s.
Image Courtesy of Wikimedia and Russianname.
Sight description based on Wikipedia.