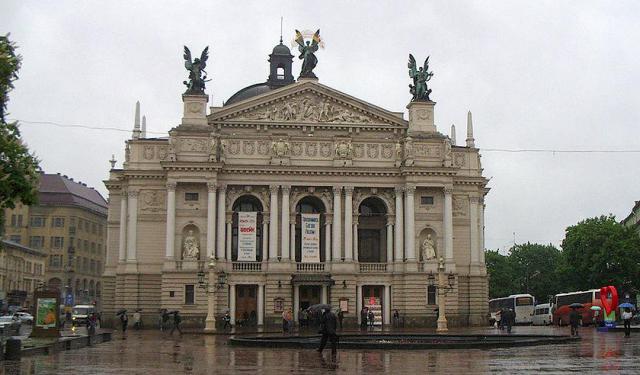 Image by Ssawka on Wikimedia under Creative Commons License.

Lviv has many historical buildings, such as churches and palaces. The city's architecture will show you the best of European styles from various periods. While walking through the streets of Lviv you will see baroque, renaissance and classic architecture. Take this self-guided tour to explore the majestic architecture of Lviv.
How it works: Download the app "GPSmyCity: Walks in 1K+ Cities" from iTunes App Store or Google Play to your mobile phone or tablet. The app turns your mobile device into a personal tour guide and its built-in GPS navigation functions guide you from one tour stop to next. The app works offline, so no data plan is needed when traveling abroad.

St. Anthony's Church, established in 1718, is one of the Roman-Catholic churches in Lviv. Though it was rebuilt, it preserved the baroque elements in its architecture and the interior design. The elegant staircase of the church is decorated with beautiful statues. The bell tower, the statues and the staircase are some of the best examples of rococo architecture in Lviv.
Image by Vasyatka1 on Wikimedia under Creative Commons License.
2

The Korniakt Palace on Market Square in Lviv is a prime example of the royal kamienica, or townhouse. The palace was originally built by architect Piotr Barbon. Construction of this elegant Renaissance palazzo was completed in 1580. The Polish-Lithuanian ruler remodeled it into a palatial residence, with spacious rooms and an audience hall. In 1908, the Sobieski Palace became home to the Jan III museum. It is now part of the Lviv History Museum. The royal chambers are used for exhibiting Rococo furniture and clocks, a collection of medallions, and precious silverware.

Image by Mathiasrex on Wikimedia under Creative Commons License.
Sight description based on wikipedia
3

The Black House, or Czarna Kamienica, is a remarkable Renaissance building on the Lviv Market Square. It was built for Italian tax-collector Tomaso Alberti in 1577. The architect was probably Piotr Krasowski. The Lviv Historical Museum has been housed in the Black House since 1926. The façade is lined with sandstone which has darkened over the years to black-brown. The front exhibits some fine decorative ornamentation. Jan Lorencowicz, having acquired the house in 1596, added another store and opened one of the town's first pharmacies on the ground floor. The uppermost store was added in 1884.
Image by Russianname on Wikimedia under Creative Commons License.
Sight description based on wikipedia
4

Palazzo Bandinelli is a late Renaissance townhouse facing Market Square in Lviv,. It was built in 1589 by a pharmacist Jarosz Wedelski, and in 1634 it was bought by a Florentine merchant, Roberto Bandinelli, known as the founder of the first post office in eastern Galicia. That office was housed in the building from 1629 onward, and was closed in a few years when the business became unprofitable. The house was considerably renovated in 1737-1739. In the 19th century Palazzo Bandinelli was used as a bookshop and a meeting place for the local literati. The Soviet authorities gave the house to the Lviv Historical Museum which had the building thoroughly repaired and restored.
Image by Yarko on Wikimedia under Creative Commons License.
Sight description based on wikipedia
5

City Hall of Lviv is set in the middle of the famous Market Square. This old building dates back to the 14th century. It has a high tower that was added in 1619. Later the tower was rebuilt in the style of Viennese Classicism. The City House is a brick building with an inner yard. There are sculptures of lions at the entrance of the City Hall; they are the symbols of Lviv.
Image by Alex Zelenko on Wikimedia under Creative Commons License.
6

The Potocki Palace in Lviv was built in the 1880s as an urban seat of Alfred Józef Potocki, Minister-President of Austria. No cost was spared to make it the grandest nobleman's residence in the city. The French architect Louis de Verny elaborated all of Beaux-Arts stylisic devices to produce a hypertrophied imitation of a French hôtel particulier. An open, parklike setting was scored to give the mansion a sense of depth. At the turn of the century the parkland gave way to a network of apartment buildings.

The palace itself was adapted for holding wedding ceremonies in 1972 and subsequently underwent restoration. In the 2000s the President of Ukraine appropriated the palace as one of his residences. Some of its architectural motifs were borrowed by the next-door exhibition hall (inaugurated in 1996).

Image by Lestat on Wikimedia under Creative Commons License.
Sight description based on wikipedia
7

The Stefanyk Scientific Library of the National Academy of Science of Ukraine is a beautiful building that is an example of Classicism architecture. The building was built in 1651—1677 as a monastery building in Baroque style. Today you can see the Corinth columns and portico. There is a monument to Stefanyk at the entrance to the library.
Image by Lestat on Wikimedia under Creative Commons License.
8

The Sapieha Palace is an architectural monument of Lviv. It was built as a Chateaubriand mansion in 1870s. During the Soviet times the palace was used as a school. In the 1990s the palace was restored and the office of preserving the historical and architectural monuments of the city is housed there. The palace is elegantly decorated and is clearly seen from the street as it has an ornamental iron gate.
Image by Russianname on Wikimedia under Creative Commons License.

Lviv is an old beautiful city with many churches in impressive buildings with majestic interiors. Some of the churches are architectural monuments listed as UNESCO World Heritage Site. Take this self-guided tour to see the most beautiful churches of Lviv.