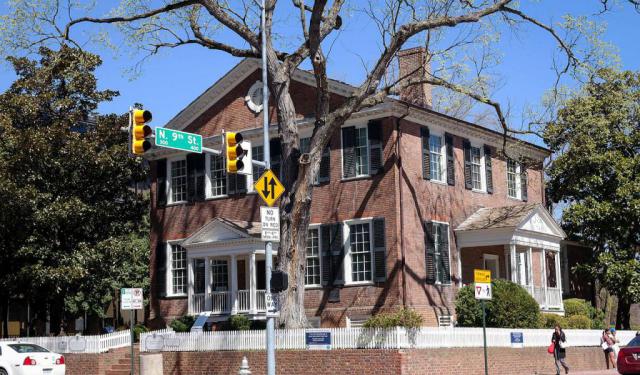 Being one of America’s oldest major cities, the capital of Virginia, Richmond is rich with historic homes, dating back well into the 1800s and beyond, preserving the local heritage and beauty. Those passionate about history and culture, will surely find plenty to their taste here. The Edgar Allan Poe Museum, The White House of the Confederacy – home of Confederate President Jefferson Davis during the Civil War, and the John Marshall House in Court End – a neighborhood known for Federal-style mansions, are just some of the attractions awaiting visitors on this self-guided tour.
Image Courtesy of Smash the Iron Cage.
How it works: Download the app "GPSmyCity: Walks in 1K+ Cities" from iTunes App Store or Google Play to your mobile phone or tablet. The app turns your mobile device into a personal tour guide and its built-in GPS navigation functions guide you from one tour stop to next. The app works offline, so no data plan is needed when traveling abroad.

Dedicated to Edgar Allan Poe's years spent in Richmond, the Old Stone House features an extensive collection of memorabilia from the writer's time. The house was built around 1740 and holds the title of Richmond's oldest home. While the poet never lived in this actual home, it stands very near where he did live and is indicative of homes of the time. Poe's mother is buried in the St. John's Church graveyard a few blocks away. Inside the Old Stone House, you'll find furniture from Poe's home and that of his sister, Rosalie Mackenzie Poe.

Inside the other buildings, you'll find more exhibits, including several first editions and manuscripts. There is an exhibit on the mysteries surrounding Poe's death, on which there have been no fewer than 26 theories published over the years.

The movement to create a museum started in 1906 when a group of locals wanted to bring more attention to the famous local poet. The Poe Memorial Association, as they became known, worked to save various bits of Poe's existence in Richmond. They were unable to save the Souther Literary Magazine building, where he began his journalism career. Still, they were able to save bits and pieces to begin creating Poe's Enchanted Garden. The organization eventually rebranded themselves the Poe Foundation, and as their collection grew, they expanded into adjoining structures.

Fans of Poe's work won't want to miss this glimpse into his early life living and working in Richmond. The museum now houses the most comprehensive collection of Poe memorabilia in the world.

History buffs will delight in the historic Old Stone House, as well as period artifacts.

The museum exhibits are self-guided, so you can take it at your own pace. If you'd like a more in-depth experience, ask about their guided tours.

The Virginia Executive Mansion was built in 1813 and is the oldest governor's house in the nation that is still used for its intended purpose. Best of all, the mansion can be toured on a limited basis. For details, see the Capitol Visitors Center. Tours of the mansion are completed with docents in each room and last about 30 minutes. The current governor and his family do live here, so there is a chance you will see them out and about.

The home is a classic example of Federal-style architecture, designed by Alexander Parris. The house has been beautifully restored to appear as it did in the 1830s, but it not features more living space and is compliant with the Americans with Disabilities Act.

The house is full of history. Three US presidents have resided here at one time or another. Both Presidents Monroe and Tyler served as governor of the Commonwealth before their time in Washington, while William Henry Harrison lived there as the son of Benjamin Harrison. Interestingly, Governor Tim Kaine's wife, Anne Holton, lived in the mansion twice. She happens to be the daughter of former governor A. Linwood Holton Jr.

The gardens around the mansion are impressive too, and they host many events throughout the year. The house has made several appearances on popular TV over the years, including when Virginia First Lady Anne Holton hosted an American Idol finalist from Richmond and when Bob Vila featured the remodeling work on Home Again. Many distinguished visitors have stepped through this house's doors, including Queen Elizabeth II, many US presidents, and Charles Lindbergh. The home is a National Historic Landmark and is on the National Register of Historic Places.
Image Courtesy of Flickr and taberandrew.
3

The neighboring Stephen Putney House at 1012 E. Marshall Street is a three-story, three-bay stuccoed brick dwelling crowned by a bracketed cornice. It features magnificent two-story verandah of ornamental iron on the east side. Both Putney Houses were built in 1859, and have extensive rear ells. The ornamental ironwork is a product of the local Phoenix Iron Works.

Putney Houses were listed on the National Register of Historic Places in 1969.
Image Courtesy of Wikimedia and Morgan Riley.
Sight description based on Wikipedia.
4

4) White House of the Confederacy (must see)

Tucked away in the Court End neighborhood not far from Capitol Square is the Jefferson Davis Executive Mansion. During the Civil War, the house was considered the Confederate States of America's counterpart to the White House in Washington, DC. Jefferson Davis was the sole president of the Confederacy, and he lived here from 1861 to 1865.

The house was built in 1818 and is a gray stucco mansion built in the neoclassical style. Robert Mills designed it for John Brockenbrough, president of the Bank of Virginia. Being so close to the State Capitol, the neighborhood was full of high-level politicians and wealthy townspeople. Brockenbrough sold in 1844, and the house changed hands several times. It was eventually sold to the city, who rented it to the Confederate government for use as the Executive Mansion.

The Jefferson family and their staff abandoned the house as Richmond was evacuated in 1865. The house was taken intact, and President Lincoln toured the home and held several meetings with local officials. Lincoln spent several hours touring the home, but he did not go beyond the downstairs floor as he felt doing so would be an invasion of privacy.

When the city announced that they planned to destroy the building in 1890, the Confederate Memorial Literary Society was formed to save the mansion. It became the Museum of the Confederacy for over 80 years. After a complete restoration in the 1980s that returned the entire structure to its wartime appearance, the building became known as the White House of the Confederacy and is part of the American Civil War Museum, which is located off-site. Today the house stands alone, surrounded by the VCU medical campus.

The house has been masterfully restored to appear as it did during wartime. The exhibit House of the Lost Cause explores the history of the Confederacy through Jefferson Davis and his daughter, Winnie Davis, with some of their personal items on display.

Plan to spend about 45 minutes or so touring the mansion. Since you're visiting the area, consider combining this tour with a visit to The Valentine, Richmond's history museum.
Image Courtesy of Wikimedia and Farragutful.
5

The John Marshall House is a historic house museum and National Historic Landmark in Richmond. It was the home of Chief Justice of the United States John Marshall, who was appointed to the court in 1801 by President John Adams and served for the rest of his life, writing such influential decisions as Marbury v. Madison (1803) and McCulloch v. Maryland (1819).

Built in 1790, the house was home to Marshall, his wife Mary Willis Ambler Marshall (known within the family as Polly), and their six children. Marshall lived at the house until his death in 1835.

The house is a Federal-style brick building featuring a dining room, parlor, and large parlor/dining room on the first floor and three bedchambers on the second. It was originally surrounded by an outbuildings including a law office, kitchen, laundry, and stables and sat on a full city block in Richmond's fashionable Court End residential neighborhood. Marshall's neighbors included the attorney John Wickham, who defended Aaron Burr in Burr's infamous treason trial.
Image Courtesy of Smash the Iron Cage.
Sight description based on Wikipedia.
6

Stewart–Lee House, also known as the Norman Stewart House, is a historic home located in Richmond. It was built in 1844, and is a three-story, three bay, Greek Revival style brick townhouse. Its low hipped roof is pierced by four interior end chimneys and surrounded by a simple molded cornice with a plain frieze.

In 1864, Robert E. Lee's wife and daughter occupied the house after the confiscation of "Arlington." On April 15, 1865 General Lee retired to the home following the surrender at Appomattox. He resided there only until June 1865, due to the "result of constant callers." In 1893, the building was given to the Virginia Historical Society "for the use and occupation of the Virginia Historical Society as a library and assembly rooms"; they occupied it until 1959. The house was conveyed to the Confederate Memorial Literary Society in 1961 and is currently the used as the office of The Family Foundation.

It was listed on the National Register of Historic Places in 1972.
Image Courtesy of Wikimedia and Morgan Riley.
Sight description based on Wikipedia.
7

The William Barret House in Richmond is a mid-19th-century house, and has been list on the National Register of Historic Places since 1972.

Since it ceased use as a private residence, the Barret House has been used by a variety of organizations and for various purposes. The Navy League Club used it as a social club for sailors during the Second World War, and it later served as the offices for the Virginia Society of the American Institute of Architects Virginia Foundation for Architecture (now the Virginia Center for Architecture) and an antique book store — all which relocated in 2005 to Branch House on Monument Avenue.

Since 2009, Barret House has served as the corporate headquarters of an asset management firm.
Image Courtesy of Wikimedia and Mojo Hand.
Sight description based on Wikipedia.