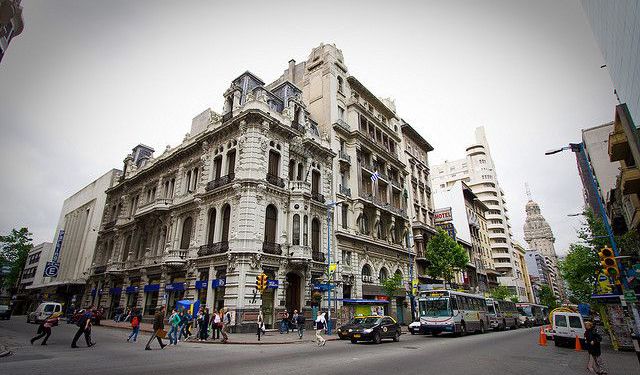 Image by Mike Disharoon on Flickr under Creative Commons License.

Montevideo is a beautiful city that has many beautiful architectural and historical places to visit. There are some famous palaces that must be visited and some plazas that exemplify the beauty of the city. All these places are named after important historical personalities. Take this tour to discover the beauty of the history of Montevideo, Uruguay.
How it works: Download the app "GPSmyCity: Walks in 1K+ Cities" from iTunes App Store or Google Play to your mobile phone or tablet. The app turns your mobile device into a personal tour guide and its built-in GPS navigation functions guide you from one tour stop to next. The app works offline, so no data plan is needed when traveling abroad.

Palacio Salvo is a building located at the intersection of 18 de Julio Avenue and Plaza Independencia. It was designed by the architect Mario Palanti, an Italian immigrant living in Buenos Aires, who used a similar design for his Palacio Barolo in Buenos Aires, Argentina. Finished in 1928, Palacio Salvo stands 100 metres high with the antenna included.

It was built on the site where the Confiteria La Giralda was once located, a place renowned for being where Gerardo Matos Rodríguez wrote his tango La Cumparsita, in 1917. The building was originally intended to function as a hotel, possibly mixed with some private residential units. This did not work out, and it never functioned as a hotel. There is now a mixture of offices and private residences in the building.

Image by pviojo on Flickr under Creative Commons License.
Sight description based on wikipedia
2

The Estévez Palace, or Palacio Estévez, is the oldest working place of the President of Uruguay (the Liberty Building and the Executive Tower being the other two). It was designed in 1873 by Manoel de Castel, and is situated in Plaza Independencia. It was owned by don Francisco Estevez and his family until it was acquired by the Uruguayan government in 1880, when it was established as the working place of the president in 1890. It has since been converted to a museum, housing artifacts and mementos of the Uruguayan presidency and its office holders.
Image by Phil Whitehouse on Wikimedia under Creative Commons License.
Sight description based on wikipedia
3

Plaza Independencia (Spanish for Independence Square) is the name of Montevideo's most important plaza. It separates Ciudad Vieja from downtown Montevideo, with the Gateway of The Citadel on one side and the beginning of 18 de Julio avenue on the other. Many important buildings, such as the Solís Theatre and the workplaces of the President of Uruguay (both the Estévez Palace and the future Executive Tower) are located by this square. In May and June 2009 an exhibition of the "United Buddy Bears" was held in the square,, for the second on the American continent.
Image by Da dinges on Wikimedia under Creative Commons License.
Sight description based on wikipedia
4

El Cabildo is a city hall where was signed the Uruguay constitution in 1830. It contains a great collection of antiques, paintings, costumes, documents of that time that characterizes a great historical event. It represents a two stored building where English speaking guides will tell you in details the history of it.
Image by Fulviusbsas on Wikimedia under Creative Commons License.
5

Club Uruguayo is a private social club. It represents a three-stored neoclassical building located in Plaza Matriz and founded in 1878. It represents a national monument now, open to the public. It has beautiful salons and marvelous staircases. Today this club has its 400 members that are gathering in this old building.
Image by Moyan Brenn on Flickr under Creative Commons License.
6

Plaza Constitución is called also Plaza Matriz. It has a fountain that symbolizes the first water system of the city. This important moment in the life of the citizens was certified by this fountain installed in 1871. Its beauty and the architectural design makes people to come here and meet here.
Image by Shant on Wikimedia under Creative Commons License.
7

Casa de Lavalleja represents a neoclassic building that was built in 1783. It became after a period of time the home for the general J. Lavalleja. He was known as the father of independence of the city. His home is presented now to the public where are preserved his manuscripts, maps, books, rooms with all inside relating his style of living.
Image by os Mendizábal on Wikimedia under Creative Commons License.
8

Plaza Zabala is a plaza in the Ciudad Vieja of Montevideo. In late 1878, during the dictatorship of Colonel Lorenzo Latorre, it was decided to demolish the old fort and build a public square in its place. But for 12 years this site remained a wasteland. The Plaza finally came to be established only on December 31, 1890 when the equestrian statue of Bruno Mauricio de Zabala was installed. It was sculpted by the Spanish sculptor Lorenzo Coullaut Valera in collaboration with the Basque architect Pedro Muguruza Otaño and inaugurated on December 27, 1931.

The Plaza also now takes its name from Bruno Mauricio de Zabala, founder of the city. The monument has an oblique plan. This layout is distinctly different in an area which has streets laid in a checkerboard pattern in the historic district, marked by the gardens designed by the landscape architect French Eduardo André. It is also one of the places where fences and gates of iron are still seen in the city. The street surrounding the square is named as Ring Durango, in honor of the town Vizcaya of Durango, where Zabala was born. On its south side, Palacio Taranco, once residence of the Ortiz Taranco brothers, is now the Museum of Decorative Arts, and on its west, the well-preserved ex-residence of Sáenz de Zumarán is now the seat of the Discount Bank.

Image by Carabás on Wikimedia under Creative Commons License.
Sight description based on wikipedia