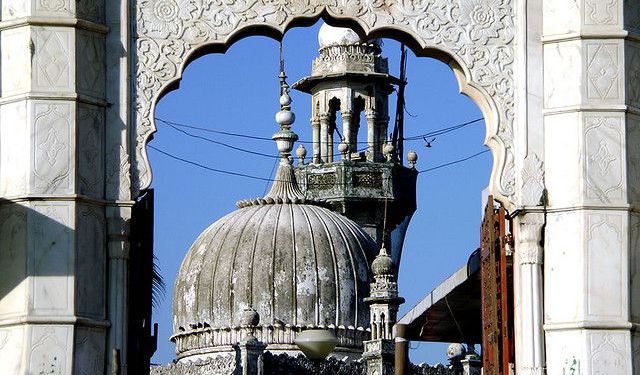 The seven islands that constitute Mumbai were originally home to the communities of the Marathi language-speaking Koli people whose main religion is Hindu. Under the Mughal Imperial rule, Mumbai began to adopt Islam, so today roughly 20% of the local population are Muslims.

When the Portuguese took over the city in 1534, they actively enforced the Roman Catholic order, followed later by the British who continued to spread Christianity throughout the area. In 1832, the Jews escaping prosecution in Baghdad came to settle in the city.

As a result, nowadays in Mumbai there are different religions co-existing peacefully side by side. Here, you can find a beautifully constructed temple for the goddess Mumba Devi, historical Muslim mosque and a Catholic cathedral from the 18th century, as well as an Orthodox Jewish synagogue of more than 130 years of age.

If you would like to explore the most prominent places of worship in Mumbai, take this self-guided walking tour.
Image Courtesy of Flickr and Tawheed Manzoor.
How it works: Download the app "GPSmyCity: Walks in 1K+ Cities" from iTunes App Store or Google Play to your mobile phone or tablet. The app turns your mobile device into a personal tour guide and its built-in GPS navigation functions guide you from one tour stop to next. The app works offline, so no data plan is needed when traveling abroad.

The city of Bombay only recently was rechristened Mumbai. The name Mumbai comes from the goddess Mumba Devi, the patron goddess of the city. Her temple is visited daily by many devotees as well as tourists who are interested in the city’s history.

At first glance, the temple does not strike as extraordinary. However, it is the history and tales attached to the place that makes this temple very special. Mumba Devi, is believed to be the chief patron of the Koli tribe, the first inhabitants of the island of Bombay. The Temple initially stood at the place where the Chhatrapati Shivaji Terminus (previously known as Victoria Terminus) now stands but was ordered to be shifted to Bhuleshwar, the heart of city’s clothing and steel market.

Apart from the history of the place, it is the tall tales associated with the place that makes this temple one of a kind. Legend has it, that the people living in the area were tormented by a giant demon Mumbaraka, who constantly plundered the city. The inhabitants prayed to Lord Brahma, the Creator as per Hindu mythology, who blessed the village with an eight armed goddess who vanquished the demon. Since then a temple has stood in Mumba Devi’s honor. The current building of the temple is believed to have been constructed in the early 17th century.

Image Courtesy of Wikimedia and Magiceye.
2

The perfect way to explore any city is on foot and Mumbai is no exception. South Mumbai, especially, is scattered with historical monuments and museums that help better understand the origins and the complex history and culture of the city. But for several reasons, only a selected few of them have achieved the status and are treated like historical monuments. The rest have managed to get absorbed into the background, have lost their identity and as a result have blended in with their surroundings.

One such place is the Jumma Masjid. This antique monument has been around since the 18th century. It is said that the Masjid was initially located near the Crawford Market but was destroyed and constructed at Esplanade only to be destroyed once again upon orders from Governor William Hornby, who did not want any building within 600 yards of the Fort area. The venue of the Masjid was then shifted to its present location and construction started in 1775. It took nearly 25 years before the mosque was completed.

Also known as the Friday Masjid, the mosque is under the administration of the Kokni Muslim community of Mumbai. A definite visit when you are in the city of Mumbai.

St. Thomas Cathedral, completed in 1718, is the first Anglican church in Mumbai, erected to improve the "moral standards" of the growing British settlement. It is located on Veer Nariman Road, close to Horniman Circle Gardens and the Flora Fountain.

The church was consecrated as a cathedral in July 1837. The tower and the clock at the western end were added in 1838. About 25 years later a major renovation scheme was launched to enlarge the chancel. This was completed by 1865. Here, many a Briton was laid to rest under elaborate marble tablets engraved with touching elegies — generals and clerks and young maids all lying together in the silent, sun-dappled interior. Most of the tombstones bear eloquent messages.

The cathedral was selected for the UNESCO Asia-Pacific heritage conservation award 2004.
Image Courtesy of Wikimedia and Narendrabora.
Sight description based on Wikipedia.
4

The Knesset Eliyahoo, also Knesset Eliyahu, is an Orthodox Jewish synagogue located in downtown Mumbai. It is the city's second oldest Sephardic synagogue. It was established in 1884 by Jacob Elias Sassoon, son of Eliyahoo David Sassoon and grandson of David Sassoon; the latter had immigrated from Baghdad to India in 1832 due to persecution and had settled in Mumbai, then known as Bombay. It is maintained by the Jacob Sassoon Trust. The building's significance is attributed to its Jewish traditions as well as Indian and English colonial influences.

Designed by the British architectural firm Gostling & Morris of Bombay, the building's base is of stone masonry while the superstructure is of brick masonry. The external frontage of the synagogue is painted turquoise, and the synagogue is popularly known as the Blue Synagogue of Mumbai. The synagogue was not originally blue. The synagogue was returned to its original color of white, with bright indigo boarders during a restoration process in 2018 - 19 carried out by conservation architect Abha Narain Lambah.

The inner space contains ornamented pillars, and the sanctuary faces west towards Jerusalem. The bimah (reader's platform) is bordered on both sides by ornately carved marble, over which is placed a tall, stained-glass arch that reaches the ceiling. Women worshippers sit in an upstairs gallery. The synagogue contains a number of Torah scrolls, along with silver-cased sefarim (religious books) belonging to the Sassoon family. On the ground floor, there are meeting and school rooms, and a mikveh (immersion pool). The staircase, windows, timber balconies, ceiling, walls, and roof are in need of restoration.
Image Courtesy of Wikimedia and Elizabeth K. Joseph.
Sight description based on Wikipedia.
5

Holy Name Cathedral, also known as the Cathedral of the Holy Name, is the headquarters of the Roman Catholic Archdiocese of Bombay. It is also the seat of the Archbishop of Bombay.

The Gothic-Revival style cathedral was completed in 1905 after three years of construction. The interior of the cathedral is adorned with a main altar made of marble with a life-sized statue of Jesus. The altar also has an image of the Virgin Mary.

The walls and ceiling in the Holy Name Cathedral are decorated in frescoes. Numerous stained-glass windows can be seen both inside and out. The cathedral offers a bell tower with 130-foot tall octagonal spires. Holy Name Cathedral was declared as a heritage building in 1998.

The church can be visited at any time regardless of the visitor's religious faith. The church office is open from 9:30 AM through 1 PM and from 4 PM through 6 PM on weekdays.
Image Courtesy of Wikimedia and Rangan Datta Wiki.

Malabar Hill is the highest point in the south of Mumbai and the city's most exclusive residential area – home to a number of movie stars and business tycoons. It is also the location of several prominent attractions.

Among them are the Hanging Gardens, terraced gardens perched at the top of Malabar Hill with a beautiful sunset views over the Arabian Sea. Walkeshwar Mandir Temple is a...  view more

Mumbai (previously known as Bombay, meaning "good bay") is a thriving metropolis on the shore of the Mumbai Harbor. The city is the financial, commercial, and entertainment capital of India, and a home to three UNESCO World Heritage Sites and Bollywood.

Portuguese took control of Mumbai in 1534. In 1661 they gifted it to the British, as part of the dowry from Catherine of Braganza,...  view more