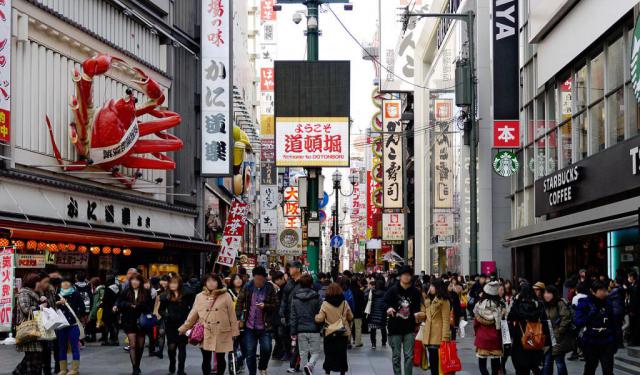 Image by Oilstreet on Wikimedia under Creative Commons License.

As well as being an exciting Western-style city full of cool entertainment and cultural attractions, Osaka is also a fantastic place to go shopping. Its appealing range of shopping options includes covered arcades, malls, dedicated streets and much more. Take our walk to catch the best shopping opportunities in the city.
How it works: Download the app "GPSmyCity: Walks in 1K+ Cities" from iTunes App Store or Google Play to your mobile phone or tablet. The app turns your mobile device into a personal tour guide and its built-in GPS navigation functions guide you from one tour stop to next. The app works offline, so no data plan is needed when traveling abroad.

Minamisemba is a great place to go for shopping, especially for young people. This place is full of shops and boutiques with the newest fashion wear and accessories. There are also a large number of food options for you to enjoy here when you’re finished shopping.
Image by akari on Flickr under Creative Commons License.
2

The Shinsaibashi shopping street in Osaka stretches from North Namba to Hommachi. It is a covered shopping arcade that has a length of 600 meters.

The Shinsaibashi Shopping Street is the largest shopping area of Osaka. The area got its name from the bridge constructed by local merchants in the area. The Shinsaibashi bridge, a wooden bridge was built by four merchants led by Shinsai Okada in 1622. It was replaced by an iron bridge imported from Germany and later a stone bridge. The prosperity of the area increased after its construction. In 1973 the old German iron bridge was assembled again to commemorate the 100th anniversary of the Shinsaibashi Bridge. It now serves as a pedestrian overpass.

The Shinsaibashi Shopping Street offers different types of shopping from high end brands to affordable products. Tradition meets modern at the street and one can find old fashioned kimono tailors and well known fashion brands from Europe. The western part is called the American Village where trendy fashions and products are available. Restaurants serving Japanese and international cuisine are located here. The Mido Suji Street is the main street of Osaka and connects downtown Kita and downtown Umeda with downtown Minami South. During the Mido Suji parade held in autumn, bands from all over the world march down the street.

Image by Davey 88 on Wikimedia under Creative Commons License.
3

The Dotonbori area of Osaka is the unofficial gastronomic district of the city. Eating places of all sizes offering a variety of cuisine are located on either side of the Dotonbori-gawa Canal. It is also a popular shopping area in the city.

The Dotonbori restaurant area is located on the south bank of the Dotonbori- gawa Canal. The street also has amusement facilities for children, Bunraku puppet shows, movie theaters and storytelling halls. It has become a landmark location in Osaka and the scene of many movies including the 1989 film, Black Rain. The 17th century Hozen-ji temple lies to the south of the street along the canal with a paper lantern giving off an orange light at sunset. The lane near the temple has many Edo Period latticework buildings.

The Dotonbori is busy during the day and at night. At night it is lit by magnificent neon lights including mechanized signs of the Glico Running Man and the Kani Duraku Giant Crab. Restaurants serve local Osaka delicacies like the Tokoyaki or octopus balls and Okinomiyaki or vegetable and meat stuffed pancakes. Visitors can also get Fugu, a poisonous fish called the blow fish which needs to be prepared carefully or could prove fatal to the person eating it. There are Shabu or all you can eat restaurants where customers can cook their own treats. Dotonbori has the most vibrant and exciting environments among shopping streets across Japan.

Image by Terence Ong on Wikimedia under Creative Commons License.
4

The Ebisubashisuji Shopping Street is an arcaded shopping street that has been covered since the Edo period. Under the 6,000 meter long arcade you’ll find all kinds of shops old and new selling wonderful jewelry, great food, traditional Japanese fashions and much more.
Image by Binh Giang on Wikimedia under Creative Commons License.
5

Doguya-suji is an amazing street lined with shops that sell everything you can think of that’s related to food. Food supplies, utensils, devises, equipment are all sold here, plus there’s a number of charming spots in the area where you can get something tasty to eat.
Image by Samantha Carroll on Flickr under Creative Commons License.
6

The Nipponbashi Den Den Town area located in the Naniwa Ward of Osaka is a popular shopping destination among tourists. A range of electronics, Otaku or Japanese comic related and other products are sold here.

During the Edo period there was a theater at the location called the Nagamachi. The Osaka Municipal Government later changed its name to Nipponbashi. After the Meiji restoration, several shops selling second hand books opened their doors here. The area was called Den Den Town after World War II when many electronics shops opened in Nipponbashi. With the establishment of two large electronics chain stores in Umeda and Namba, the street lost its popularity among customers until recently when the shops started selling Otaku and anime related products.

Shops at the Nipponbashi Den Den Town sell a range of products like electronics, household appliances, lighting, personal computers, video games, Cd players and cameras at affordable rates. Unlike other markets in Osaka, customers can bargain and get products at a lower price. Tax and duty free shops are also located here and tourists who bring their passport can get a good deal on products. There are Maid and Cosplay cafés where maids or waiters in costumes serve customers. Full service sit down cabarets are also located here.
Image by Inoue-hiro on Wikimedia under Creative Commons License.