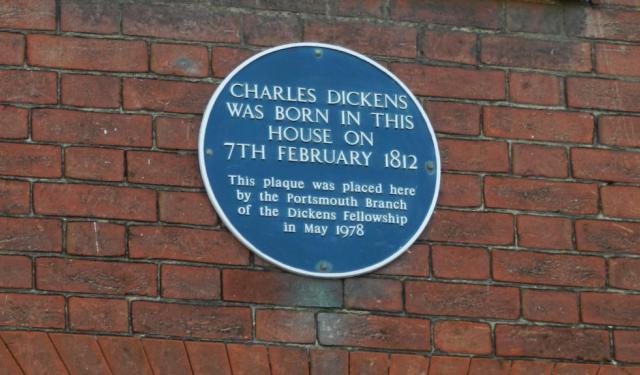 Image by Steve F on Wikimedia under Creative Commons License.

Portsmouth is a city with rich history and preserved traditions, so its cultural life presents a point of interest for tourists from all over the world. Different museums and galleries will show you the city from different points of view, and the following tour will help you to feel as if you are a part of its cultural life.
How it works: Download the app "GPSmyCity: Walks in 1K+ Cities" from iTunes App Store or Google Play to your mobile phone or tablet. The app turns your mobile device into a personal tour guide and its built-in GPS navigation functions guide you from one tour stop to next. The app works offline, so no data plan is needed when traveling abroad.

The D-Day Museum is located in Southsea, near Portsmouth in Hampshire, England. Opened in 1984 by HM Queen Elizabeth The Queen Mother, it tells the story of Operation Overlord during the Normandy D-Day landings. The museum houses the Overlord embroidery and the display involves a film show including original footage and archive film. The D-Day Museum is home to the Overlord Embroidery and was specially built to hold it. The Overlord Embroidery took five years to complete and measures 272 feet long. It is the largest work of its kind in the world. Visitors are handed a Sound alive device upon entering the museum, which allows them to hear an audio commentary. In addition to the film and embroidery there are also vehicles and displays of other material associated with D-Day and the war. The museum has its own shop and restaurant.
Image by Colin Smith on Wikimedia under Creative Commons License.
Sight description based on wikipedia
2

Hiscock Gallery houses a big collection of local art by more than 40 artists as well as a big framing department. Another place of interest is a fully stocked store selling arts and crafts supplies. The gallery is owned by Rick and Helen Steenhuis, a family business offering its visitors a very pleasant, welcoming atmosphere.
Image by Wynter Bracken on Flickr under Creative Commons License.
3

The Kings Theatre opened on 30 September 1907 with a production of Charles 1 followed by 2 further of Sir Henry Irving's Works. The theatre stayed in the control of its original owners, The Portsmouth Theatre Company, until 1964 when it was purchased by Commander Reggie & Mrs Joan Cooper. In 1990 it was sold again to Hampshire County Council.

In 2001, after a successful campaign by AKTER (Action for Kings TheatrE Restoration) to keep the theatre open, the theatre was purchased by Portsmouth City Council and leased to the Kings Theatre Trust Ltd who undertook the restoration the building.

The present day theatre has a seating capacity of 1600 and a computerised booking system. Much of the backstage area is still fully manual, allowing it to retain the tag of a traditional hemp house, though powered flying bars have now been installed to allow large scale productions.

Image by Rafael Kage on Flickr under Creative Commons License.
Sight description based on wikipedia
4

Southsea Gallery contains vintage movie prints and posters, huge collections of frames, photos, unusual pieces and a full service of photo restoration. The photos represent mostly local scenes and landmarks, which is why this place is frequently visited by tourists. The gallery is open Tuesday - Saturday from 9:30 am till 5:30 pm.
Image by Vix Walker on Flickr under Creative Commons License.
5

Portsmouth is a small place that has a great variety of habitats and the Natural History Museum is the right place to explore them all. It also houses a geological section, a butterfly house and an aquarium. There are many constantly changing temporary exhibitions - "Art and Nature", for example, combines pieces of art with live creatures to show how artists are inspired by the nature.
Image by kevincole on Flickr under Creative Commons License.