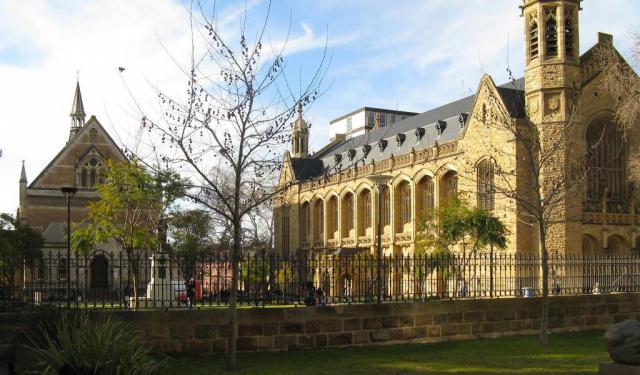 Image by Adam.J.W.C. on Wikimedia under Creative Commons License.

Although Adelaide is a comparatively small city, it has a wide range of architecture, including modern, Victorian, European design elements and historic colonial buildings. This city is most representative of Australian heritage and history. Adelaide itself is like taking a walk through a museum of architecture.
How it works: Download the app "GPSmyCity: Walks in 1K+ Cities" from iTunes App Store or Google Play to your mobile phone or tablet. The app turns your mobile device into a personal tour guide and its built-in GPS navigation functions guide you from one tour stop to next. The app works offline, so no data plan is needed when traveling abroad.

Ayers House is a historic mansion named after Sir Henry Ayers, five times Premier of South Australia and wealthy industrialist, who occupied it from 1855 until 1897. It is the only mansion to have survived on North Terrace. Plans for the historic two-stored mansion were developed in 1846 for William Paxton, an Adelaide chemist and it was one of the first properties in Adelaide to be fitted with gas lighting. It is constructed of local blue-stone and is Regency period in style. The mansion is thought to have been designed by George Strickland Kingston. During Sir Henry Ayers's parliamentary service, the house was used for Cabinet meetings, parliamentary dinners and grand balls. The rooms of the mansion feature hand-painted ceilings, stenciled woodwork and contain memorabilia from the Ayers family, demonstrating the wealth of the property at the time it was built.

Ayers House is currently the property of the National Trust of South Australia. For the last 30 years it has been used as a corporate function center, restaurant and museum. On display are costumes, silverware, artworks and furniture, as well as a 300 kilogram chandelier.


Image by Peripitus on Wikimedia under Creative Commons License.
Sight description based on wikipedia
2

Bonython Hall is the "great hall" of the University of Adelaide, located in the university grounds and facing North Terrace. The building is on the Register of the National Estate and the South Australian Heritage Register and it is primarily used for University graduation ceremonies, examinations, expositions, public lectures and meetings likely to draw large audiences.

The hall was built in the period 1933-1936 as a result of a donation of over £50,000 from Sir John Langdon Bonython. There are many local legends about the building, with two being particularly resilient: one maintains that the Bonython family were very conservative and did not want the building used as a dance hall hence the hall was designed and built with a sloping floor rather than flat floor; second is that the Bonython donation was made on the condition that a hall be built opposite Pulteney Street, thus blocking any future path through the parklands and preventing the division of the campus by a major thoroughfare.
Image by Bram Souffreau on Wikimedia under Creative Commons License.
Sight description based on wikipedia
3

The building now known as the Mortlock Wing was opened on 18 December 1884 as a Public Library, Museum and Art Gallery for the colony of South Australia with 23,000 books and a staff of three. Construction of the building took over 18 years to complete after the initial foundations were laid in 1866. The building is French Renaissance in style with a mansard roof, its interior has two galleries, the first supported by masonry columns, and the second by cast iron brackets. The State Library's rare books collection is the major collection of its kind in South Australia.

Monday - Sunday: 10 am-5 pm
Image by Blnguyen on Wikimedia under Creative Commons License.
Sight description based on wikipedia
4

Government House is the official residence of the Governor of South Australia. The earliest part of the House to be built was the east wing of the present building which was completed and occupied in May 1840. When completed, Government House consisted of the present main Drawing Room, Morning Room, Small Dining Room, and upstairs there were three bedrooms, a dressing room and two small servants' rooms. Government House is probably the second oldest continuously occupied house in the State and is located in magnificent well kept grounds which are periodically used for important public ceremonies.
Image by Peripitus on Wikimedia under Creative Commons License.
Sight description based on wikipedia
5

The Festival Centre Plaza also serves as host to an outdoor collection of sculpture, including the prominent stainless steel Environmental Sculpture by Bert Flugelman. As well as the Festival of Arts, the Centre hosts the annual Adelaide Cabaret Festival in June and OzAsia Festival in September, and the biennial Adelaide International Guitar Festival.
Image by Michael Zimmer on Wikimedia under Creative Commons License.
Sight description based on wikipedia
6

Non-sitting days: Monday — Sunday: 9 am — 5 pm
Image by Rocky88 on Wikimedia under Creative Commons License.
Sight description based on wikipedia
7

Adelaide Railway Station is the central terminus of the Adelaide Metro railway system. Adelaide’s first railway station opened on the current North Terrace site in 1856. It served the broad gauge line between Adelaide and Port Adelaide, which was the first government-owned and operated steam railway in the British Empire. The period from 1922 onwards was known as the Webb era on South Australian Railways. Under the leadership of a new Railways Commissioner, William A. Webb, South Australian Railways began a massive rehabilitation programme. However the years 1985 to 1987 saw the biggest change at Adelaide Station since the rebuilding of the 1920s, under the ASER project. The station has nine platforms and almost all trains on the metropolitan network either depart from or terminate here. Today 40,000 people pass through Adelaide Railway Station each weekday.
Image by Rexness on Flickr under Creative Commons License.
Sight description based on wikipedia
8

Opening hours: Monday – Friday: 9 am – 5 pm
Image by corbs83 on Wikimedia under Creative Commons License.
Sight description based on wikipedia
9

Her Majesty's Theatre, originally called Tivoli Theatre, was built in 1913, holding a capacity of 1009. Lili Langtry’s famous The Jersey Lily performed here on opening night. It is considered a marvelous artifact of Australia’s theatrical history.
Image by Parkaboy on Flickr under Creative Commons License.
10

The creation of South Australia’s Supreme Court was an early example of Edward Wakefield's theory of colonization, in contrast to the other Australian colonies, which had established their courts long after the settlement of the colony. Established by Letters Patent in 1837, five days after the colony was founded, unlike other Supreme Courts it is not divided into separate trial and appeal divisions. It has unlimited jurisdiction within the state in civil matters, and hears the most serious criminal matters. The Supreme Court is the highest South Australian court in the Australian court hierarchy. It is constituted of a Chief Justice and 12 other judges (justices).
Image by Scott W. on Wikimedia under Creative Commons License.
Sight description based on wikipedia