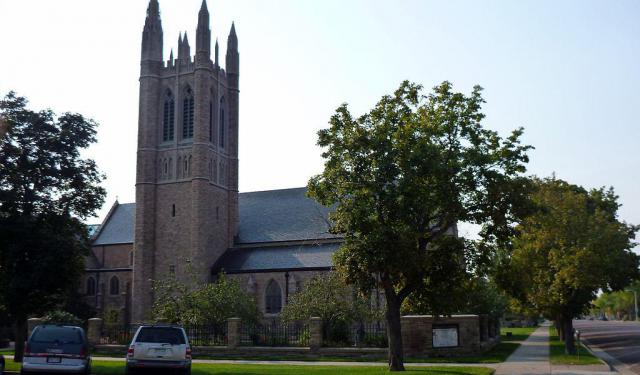 Colorado Springs has a rich religious heritage. There are numerous places of worship in the city that represent a variety of faiths, including Catholic, Baptist, Presbyterian, Unitarian and more. Take this tour to explore the beautiful cathedrals, churches and temples in Colorado Springs.
Image Courtesy of Wikimedia and ERoss99.
How it works: Download the app "GPSmyCity: Walks in 1K+ Cities" from iTunes App Store or Google Play to your mobile phone or tablet. The app turns your mobile device into a personal tour guide and its built-in GPS navigation functions guide you from one tour stop to next. The app works offline, so no data plan is needed when traveling abroad.

St. Mary’s Cathedral, is a Catholic cathedral located in Colorado Springs. It is the seat of the Diocese of Colorado Springs and is listed on the National Register of Historic Places as St. Mary's Catholic Church.

Pease and Barber designed the present church in the Gothic Revival style. The lower level of the church was completed in 1891 and the upper church was completed seven years later. The church was dedicated on December 19, 1998. The bell towers on the front of the church were added in 1902 and the spires were completed in 1907. A major redecorating project took place from 1902-1904 when the Gothic arched ceilings, six side-aisle windows and electric lights were added. A new pipe organ was placed in the church in 1916. The clerestory and apse windows were added during a renovation project from 1923-1924. The rose window on the main façade was given its current configuration in 1930.

Blessed John Paul II established the Diocese of Colorado Springs on November 10, 1983. St. Mary’s was chosen to be the cathedral of the new diocese. Bishop Richard Hanifen was installed as the diocese’s first bishop on January 30, 1984.

Image Courtesy of Wikimedia and Jeffrey Beall.
Sight description based on Wikipedia.
2

First Christian Church dates back to the late 1800s. This church community seeks to help people grow spiritually. It hosts a concert series throughout the year, which features local performers. Mass is held on Sunday at 8 a.m. and 11 a.m., and the church is open to visitors Sunday to Friday from 8 a.m. to 1 p.m. It is situated at the corner of North Cascade Avenue and East Platte Avenue.
Image Courtesy of Flickr and Violette79.
3

First Congregational Church is home to an open-minded community of worshippers. Congregationalism began as a doctrine in the 1600's, and its parishioners helped to found Harvard, Yale and Colorado College. First Congregational Church in Colorado Springs was established in 1874. It was designed by Henry Rutgers Marshall in the Romanesque style and was built of Wall Mountain Tuff (rhyolite). On October 31, 2002, the church was declared a Historic Site of Colorado Springs.
Image Courtesy of Flickr and DrGBB.
4

Grace and St. Stephen's Episcopal Church is a church in Colorado Springs and was founded in 1872. The current building complex was built in several stages. The original building on the site was completed in 1895 and serves as parish hall today. The tower building, which is a copy of Magdalen College at Oxford University, England, was designed by architects Frohman, Robb and Little, who also designed St. Thomas Church in New York City and of Washington National Cathedral in Washington D.C. The building was completed in 1926.
Image Courtesy of Flickr and Boyscout.
Sight description based on Wikipedia.
5

Rocky Mountain Praise Church is a small church located at the junction of East Boulder Street and Platte Court Street. It is part of the Rocky Mountain Region Church of God. The church has four departments: Women's Ministries, Youth and Christian Education, Evangelism and Home Missions, and Girls Club.
Image Courtesy of Flickr and Rchard.
7

New Covenant Church of God was initially founded by Reverend Roland Purcell Joyner in 1992 in Manitou Springs, a small town located near Colorado Springs. Two years later, the pastor held his first official service in Colorado Springs in a new building situated in the heart of the city. The church is registered as a historical landmark. It has two levels (7,500 square feet) and can accommodate 400 people.
Image Courtesy of Flickr and mrbill.
8

First Baptist Church is an amazing edifice from an architectural point of view. It combines both old and modern aspects of design. This impressive building is made of red brick. It has two floors, several entrances and two tall towers. The large central window is the focal point of the church's exterior.
Image Courtesy of Flickr and shioshvili.
9

Rose of Sharon Temple is a white edifice with large painted windows. It is easily recognizable by the massive white crucifix on its roof. The temple has a simple, elegant interior. Come here to enjoy a moment of peace and reflection.
Image Courtesy of Flickr and peasap.
10

Springs Reformed Church is part of the Reformed Presbyterian Church of North America. The church initially consisted of several couples and individuals who met in the home of Bob and Ruth Mann. In 1992, the growing congregation moved into the current Springs Reformed Church building. After a long period remodeling and restoration, the church opened its doors to parishioners.
Image Courtesy of Flickr and seyed mostafa zamani.

Create Your Own Walk in Colorado Springs

Creating your own self-guided walk in Colorado Springs is easy and fun. Choose the city attractions that you want to see and a walk route map will be created just for you. You can even set your hotel as the start point of the walk.

Colorado Springs is a city with a fascinating history and a vibrant cultural scene. It boasts a number of great museums and art galleries, beautiful cathedrals, churches and temples, antique shops and boutiques. This self-guided tour will lead you to the top attractions in Colorado Springs.