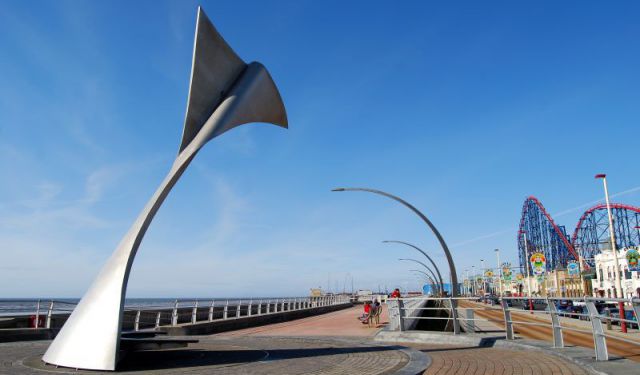 Image by AEJHarrison on Flickr under Creative Commons License.

Blackpool's Great Promenade is an interesting area to explore. Here you will find Blackpool South Pier, Ripley’s Believe It or Not, and a wide range of amusement parks. On the South Promenade is "The Great Promenade Show" that features nine original pieces of art. Take this tour to discover this wonderful area of the city.
How it works: Download the app "GPSmyCity: Walks in 1K+ Cities" from iTunes App Store or Google Play to your mobile phone or tablet. The app turns your mobile device into a personal tour guide and its built-in GPS navigation functions guide you from one tour stop to next. The app works offline, so no data plan is needed when traveling abroad.

South Pier (originally known as Victoria Pier) is one of three piers in Blackpool. Located on South Promenade on the South Shore, the pier contains a number of amusement and adrenalin rides. It opens each year from March to November and is owned by Six Piers Limited. The Blackpool South Shore Pier & Pavilion Co. Ltd. was registered in November 1890 and work began to build the pier in 1892.

Victoria Pier was considered to be more "upmarket" than North and Central piers, and at first provided little entertainment. The pier now contains numerous rides including dodgems, Crazy Mouse and a waltzer, the Laughing Donkey Family Bar, which has live entertainment, a Kiddies Ride Arena, as well as the Adrenaline Zone which houses: "Skycoaster", a freefalling swing at a height of 38 m; "Skyscreamer", a Reverse Bungee ride; "Spider Mountain", a multi-storey climbing spiders web; and "Maxibounce", an acrobatic, safety harnessed trampoline.

Image by Jon Bennett on Wikimedia under Creative Commons License.
Sight description based on wikipedia
2

The High Tide Organ is a tidal organ 15 metres tall constructed in 2002 as part of "The Great Promenade Show" series of sculptures situated along Blackpool's New Promenade. The artwork described as a "musical manifestation of the sea" is one of a few examples of a tidal organ.

The sculpture was designed by the artists Liam Curtin and John Gooding, and was constructed in concrete, steel, zinc and copper sheet. The harnessing of wave energy, and the sculpting of the concrete and metals is said to produce a unique interpretation of Blackpool's natural and man-made environments. The instrument is played by the sea at high tide through eight pipes which are attached to the sea wall. These are connected under the promenade to 18 organ pipes within the sculpture. The swell of seawater at high tide pushes air up the sea-wall pipes and causes the organ pipes to sound. The best time to hear the High Tide Organ is two to three hours before or after high tide. On very calm days the organ is silent for part of its cycle. The pitches of the pipes are based on the harmonic series in B flat.

Image by MattKitty on Wikimedia under Creative Commons License.
Sight description based on wikipedia
3

In 2003 the park opened the Big Blue Hotel, a four star hotel, making the park part of an official resort. The park operates an additional children's park in the resort called Nickelodeon Land which is a subsidy of Nickelodeon; it occupies the space of the original children's park which was called Beaver Creek. The main attractions at Pleasure Beach, Blackpool include: Big One: The UK's tallest roller coaster with a peak height of 213 ft, built by Arrow Dynamics, Infusion: A Vekoma Suspended Looping Coaster and the world's first constructed entirely over water, Revolution: Europe's first fully inverting roller coaster, built by Arrow Dynamics, Grand National: A twin tracked " Möbius Loop" racing wooden roller coaster, opened in 1935.

Image by Paul Allison on Wikimedia under Creative Commons License.
Sight description based on wikipedia
4

Ripley's Believe It or Not! is a franchise, founded by Robert Ripley, which deals in bizarre events and items so strange and unusual that readers might question the claims. The Believe It or Not panel proved popular and was later adapted into a wide variety of formats, including radio, television, comic books, a chain of museums and a book series.

The Ripley collection includes 20,000 photographs, 30,000 artifacts and more than 100,000 cartoon panels. With 80-plus attractions, the Orlando-based Ripley Entertainment, Inc., a division of the Jim Pattison Group, is a global company with an annual attendance of more than 12 million guests. Ripley Entertainment's publishing and broadcast divisions oversee numerous projects, including the syndicated TV series, the newspaper cartoon panel, books, posters and games. When Ripley first displayed his collection to the public at the Chicago World's Fair in 1933, it was labeled Ripley’s Odditorium and attracted over two million visitors during the run of the fair. In 1950, a year after Ripley's death, the first permanent Odditorium opened in St. Augustine, Florida.
Image by Stinkie Pinkie on Flickr under Creative Commons License.
Sight description based on wikipedia
5

"The Swivelling Wind Shelters" is part of "The Great Promenade Show" and was constructed in 2004 by Ian McChesney with Atelier One. The sculpture was made using stainless steel and wood and is 8 meters high. It moves with the wind in order to provide a constant source of shelter.
Image by Green Lane on Wikimedia under Creative Commons License.
6

On the newly regenerated South Promenade, you will find a great deal of artwork, which was commissioned and funded by the Blackpool Council. "Life as a Circus" is one such peice, which serves as a tribute to the importance of the entertainment industry in Blackpool. The sculpture is of four people standing on a horse. It was constructed by Sir Peter Blake in 2004.
Image by Green Lane on Wikimedia under Creative Commons License.
7

"Desire" is part of "The Great Promenade Show". This impressive monolithic sculpture was constructed in 2001 by Chris Knight using steel. With its large stainless steel spikes, this piece represents the seductive power of danger.
Image by digiphotology on Flickr under Creative Commons License.
8

“They Shoot Horses, Don’t They?”, part of "The Great Promenade Show", is the largest dance hall mirror ball in the United Kingdom. It includes more than 47,000 mirror tiles. Created by Michael Trainor in 2002, it was named after an American film about record-breaking dance marathons.
Image by Andy Hay on Flickr under Creative Commons License.
9

"Glam Rocks" was constructed in 2001 by light artist Peter Freeman. This piece is comprised of three huge pebbles that reflect light beamed from Blackpool’s beach. "Glam Rocks" incorporates hundreds of optic lights, which slowly change color and create a wonderful sight.
Image by becki3 on Flickr under Creative Commons License.
10

"Water Wings" is another piece of art on South Promenade. It was created in 2001 by Bruce Williams. The sculpture is of a panoramic, curved metal screen made from laser cut stainless steel.
Image by Gary Shield on Flickr under Creative Commons License.
11

"The Frankenstein Project" was created by Tony Stallard in 2001. Inspired by Blackpool's Victorian freak shows, Stallard decided to create a giant sea creature. This piece warns of the bad things that can happen when interfering with nature.
Image by L.C.Nøttaasen on Flickr under Creative Commons License.
12

"The Sound of the Wind Looks Like This" is the last piece of art on South Promenade. It was created by Steven Hurrel in 2003 and is a unique visual illustration of the current direction and speed of the wind. These two variables determine the color, height, and speed of six pulsating lights.
Image by vaxomatic on Flickr under Creative Commons License.