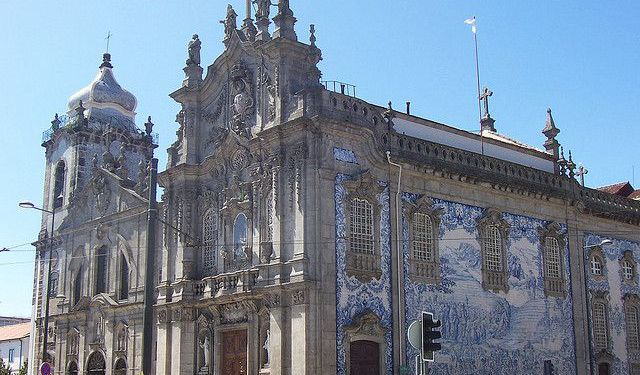 Image by Berto Garcia on Flickr under Creative Commons License.

Tour of Porto's Places of Worship (Self Guided), Porto

Portugal is one of the oldest countries in Europe, and is home to a number of historic worship sites. The Catholic religion has deep roots in this country, which is why you will see many chapels, churches and monasteries. Whatever your religion may be, you will not be disappointed by your visit to some of Porto's most beautiful places of worship.
How it works: Download the app "GPSmyCity: Walks in 1K+ Cities" from iTunes App Store or Google Play to your mobile phone or tablet. The app turns your mobile device into a personal tour guide and its built-in GPS navigation functions guide you from one tour stop to next. The app works offline, so no data plan is needed when traveling abroad.

The Igreja da Trinidade, designed by architect Charles Amarante, was built in the neoclassical style, popular during the 19th century. The interior frescoes represent the Baptism of Christ and were created by the famous Portuguese painter José de Brito. This holy building is located on Trinity Square behind the Porto City Council building.
Image by Manuel de Sousa on Wikimedia under Creative Commons License.
2

Famous for its exterior of blue and white tiles painted with scenes from the lives of saints Francisco de Assisi and St. Catherine, Capela das Almas ("Chapel of Souls") sits at a busy junction high street and shopping centre in Porto. It was built in the 18th century, having two sections; the chapel one is smaller. The interior is small, dark and intimate AND has no charge, so try to see it as well.

Tip:
Go around 2pm as the sunlight hits the tiles around that time and you'll get some great photos (if possible, bring a wide-angle lens).

Image by Валерий Дед on Wikimedia under Creative Commons License.
3

The Igreja de Santo Ildefonso is an 18th-century proto-Baroque style church in Porto. It is named in honour of the bishop of Toledo. The building took thirty years to complete, inaugurated on 18 July 1739.

The church suffered storm in 1819 and damage from artillery fire in1833 during the Siege of Porto. Over the years it has undergone structural modifications, including replacement stained glass windows in 1967, created by the artist Isolino Vaz. Constructed of granite, the shape of the church's main body is that of an octagon. The facade is regular and plain, with two bell towers and a recess where a figure of the church's patron stands.

Two notable features of the church are the retable and the blue-and-white tiling. Nicolau Nasoni designed the retable, which was created and installed by architect Miguel Francisco da Silva in 1745. 11,000 tiles cover the facade of the church and depict scenes from the life of Saint Ildefonso and figurative imagery from the Gospels.
Image by Poco a poco on Wikimedia under Creative Commons License.
Sight description based on wikipedia
4

Santa Clara's structure dates back to the 1400s and is an excellent example of Baroque architecture. The building was constructed for the Roman Catholic Church. The interior holds a vast selection of some of the best gilded Baroque woodwork in all of Porto. Originally it housed both a monastery and convent and continued to be used in this fashion until the 19th century.

The entrance of the structure has a large Baroque door which is flanked by Renaissance characteristics, including Solomonic columns with Corinthian capitals. These were added during one of the several renovations which took place over its lifetime. Solomonic columns typically can be described as having a twisted corkscrew shape which cannot be mistaken with other column designs. Corinthian capitals are usually seen embellished with scrolls and acanthus leaves.

The interior of the church is definitely the place a guest to the city who is fascinated with elaborate décor will want to explore. The interior of this facility has elaborate wood carvings throughout it with many of them gilded in real gold. The portico, which was created by famed artist, Miguel Francisco da Silva, is something special to admire.

Tip:
You should expedite your visit as they should close soon (5/2019) for 2 to 3 years of rehabilitation works.

Located in Porto, Portugal, the Igreja de Santo Antonio Congregados, also known as the Saint Anthony Church of the Gatherers, is dedicated to Saint Anthony of Padua. This Portuguese born saint, St. Anthony was born in the 12th century and became a Franciscan priest. The Franciscans were the largest member of the Order of the Friars Minor and were founded by St. Francis Assisi. As a missionary, he eventually found his calling in Padua, Italy. The building was constructed during the late part of the 17th century. The church replaced the original church which stood on this land for several hundred years. Designed by the very popular and world renowned architect of the time, Joaquim Jaime B. Ferreira-Alves, it is elegant and elaborate with Baroque features including the fabulous tile work which was created by the famed artisans, Jorge Colaço and João Baptista Ribeiro. The tile work tells the story of St. Anthony and the Assumption of the Blessed Virgin Mary. Baroque style is characterized by sharp details and larger-than-life motion which, it its architectural constructions often appear as if they are seamlessly reaching for the sky. Many of the Roman Catholic Churches throughout Europe have some style elements of the Baroque period of art and architecture.
Image by Leandro's World Tour on Flickr under Creative Commons License.
6

Igreja dos Clérigos ("Church of the Clergymen") is a Baroque temple in Porto whose tall bell tower can be seen from various parts of the city and has long become its symbol. The church was built for the Brotherhood of the Clergy by Nicolau Nasoni, an Italian architect and painter who did extensive work in the north of Portugal in the 18th century. Construction began in 1732 and was finished around 1750. The main facade is heavily decorated with baroque motifs (garlands and shells) and was based on an early 17th-century Roman scheme. The altarpiece of the main chapel, made of polychromed marble, was executed by Manuel dos Santos Porto. The monumental, six-floor tower behind the church was built between 1754 and 1763 to the design inspired by Tuscan campaniles. Inside the tower, there are 240 steps leading to the very top from which opens a magnificent panorama of Porto.

Tip:
While the church is free to enter, you are better off getting the tower ticket if you can afford it as then you can walk around the 2nd floor and get a different view of the main part of the church.

Located in Porto, Igreja da Misericórdia is a fantastic church that can be found in the center of this historic city on the Rua das Flores. It is a very popular attraction with visitors to the metropolis. The structure has a history which begins in the 1500s. Although the building has gone through several renovations over the years, there are still many of the original elements showing upon examination of the church. The façade is reminiscent of the Baroque style of architecture and was added in the 1700s.

Tourists will enjoy exploring the museum inside the building which exhibits many 15th century artworks and artifacts. One, in particular, is the Flemish Fins Vitae that shows King Manuel I and his wife, Leonor, kneeling before the crucifixion. King Manuel I was a 14th-century ruler, under whose reign Portugal became a world power. The street – Rua das Flores – where the structure is located has a history dating back to 1521. It is filled with incredibly beautiful homes that have wrought iron balconies and iconic embellishments. For those who are fascinated with architecture and design, this street will be well worth setting aside some time to explore.

Tip:
This stunning church is open for only a few hours a day, but you can get to see it as part of your entry to the adjacent museum (10am-6:30pm) that boasts a collection of sacred art.
Image by António Amen on Wikimedia under Creative Commons License.
8

Capela de São José das Taipas is located on Rua Dr. Barbosa de Castro. Construction on the church began in 1795 and finished only in 1878. The delay was caused not only by a lack of cooperation but also by a number of disruptive social and politic events that occurred at the beginning of the 19th century. Inside, the church has a nave, along which runs a balcony with iron railings. Behind the main altar there are another four side altars dedicated to health, conception, the Lady of Sorrows and St. Anthony.
Image by Manuel de Sousa on Wikimedia under Creative Commons License.
9

One of the oldest buildings in the historic part of Porto, Igreja do Carmo is actually a combination of two buildings: one dating from the 1600s and the other from the 1700s. Originally, it was built for the Carmelite order of the Roman Catholic Church and was used as a convent. The Baroque style structure features golden woodwork in the interior along with neoclassical tiles. It has a classic façade with a bell tower. The oldest of the two parts of the church – built with a single nave – has seven altars created by Francisco Pereira Campanhã. The exterior wall of the building is covered in tiles depicting the history of the Carmelite order. Connecting the right and the left side of the structure is a narrow building which measures only one meter in width and was meant originally to keep the monks separated from the nuns of the convent, thus preserving the nuns' chastity and helping the monks keep their vows of celibacy.

Why You Should Visit:
Stunning inside and out; a glorious example of Porto's traditional 'azulejos' (tiles), which are often blue and white and have been handpainted.
The organ is a piece of art and highly unusual, in that there are horizontal horns protruding from the pipe area.

Tip:
Be sure to visit the 1-meter wide house separating the two churches – one of the world's narrowest buildings.
Image by Henning Supertramp on Wikimedia under Creative Commons License.

Porto is home to a wide variety of landmarks, which the city has acquired over a long period of time. Today the city works hard to preserve these landmarks and keep them looking as they did when they were originally built. Take this tour to visit the most famous sites in Porto.

One of the best ways to learn about the history and culture of Portugal is to visit the museums in one of its largest cities, Porto. See a variety of exhibits that teach about everything from transportation and history to wine and geology. Take this tour to visit the most interesting museums in Porto.

Tour Duration: 2 Hour(s)
Travel Distance: 3.9 Km or 2.4 Miles
Where To Stay in Porto, Portugal - Guide of Best Areas and Hotels