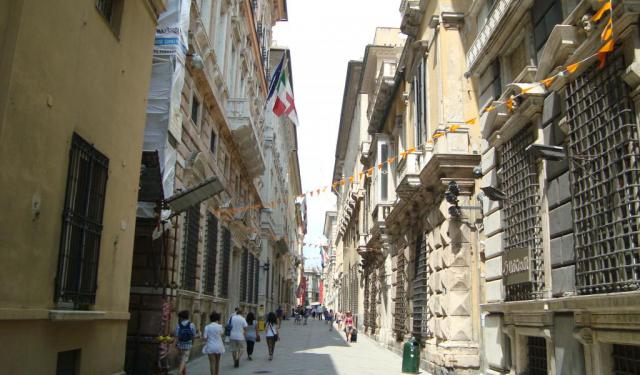 Via Garibaldi, designed by Bernardino Cantone, is one of the main streets of Genoa and a major center of the entire architectural history. Established in the early 1550s, the street has an impressive design. Delightful edifices, belonging to the richest Italians of the Renaissance, will catch your eye and interest. Take this tour to discover the impact of its magnificent palaces on your outlook on art.
How it works: Download the app "GPSmyCity: Walks in 1K+ Cities" from iTunes App Store or Google Play to your mobile phone or tablet. The app turns your mobile device into a personal tour guide and its built-in GPS navigation functions guide you from one tour stop to next. The app works offline, so no data plan is needed when traveling abroad.

Originally built and designed by Bernardino County in 1558, on behalf of Agostino Pallavicini, Palazzo Pallavicini-Cambiaso became the property of the Cambiaso family approximately halfway through the eighteenth century. The prospectus of the building is very elegant, with a hanging rusticated gray stone that brings out the white marble plinths. The portal is decorated with a frieze of ox skulls in Mannerist style that fits in well with the 18th century shrine. The building has currently changed ownership through a notorious bank transfer.
Image by Twice25 & Rinina25 on Wikimedia under Creative Commons License.
2

At 2 Via Garibaldi you will find the 1558 palace of Banco di Chiavari and the Italian Riviera (Banca Popolare di Lodi). The Palace Spinola, also known as Palazzo Gambaro, was built by architect Bernardo Spazio for Pantaleo Spinola. It is one of the most artistically and architecturally important ones, related in particular to the frescoes of the hall, representing Janus - one of the symbols of Genoa - along with Hercules and the mythological symbol of Peace, by Domenico Piola and Paul Brozzi. Other frescoes of value decorate the room Susanna and Solomon and the Hall of Coriolanus. The facade comprises very simple lines, moved by the rhythm of windows, balconies and especially the adjective portal surmounted by two marble statues, an allegory of prudence and vigilance.
Image by Jacqueline Poggi on Flickr under Creative Commons License.
3

The palace Carrega-Cataldi is a historical building in Via Garibaldi. The building now houses the Chamber of Commerce of Genoa. Its interior design reflects the two phases of construction. The side walls and the ceiling of the vestibule floor are completely covered with stucco, grotesque and painted panels representing Apollo and the Muses Citaredo figures and musicians. The other construction phase belongs to the 18th century. The chapel, decorated by Lorenzo De Ferrari, has stucco and fake stucco surrounding the fresco with the angels' wings. Even the doors are painted on canvas by a painter who won two important medals: Annunciation and Nativity.
Image by Twice25 & Rinina25 on Wikimedia under Creative Commons License.
4

Palazzo Lercari-Parodi was built in 1571 by Franco Lercari. In 1845 it was bought by the Parodi family, who is still the owner. The palace, whose designer is not known, differs from the other buildings in Via Garibaldi. The lower part of the facade is decorated with textured diamond-tipped, while the upper floors were originally lightened by a series of open loggias, then closed glass-walled early in the 19th century. Also in front is a very interesting portal of Taddeo Carlone's work, framed by two telamons with flat noses. It recalls the terrible legend of Megollo Lercari, ancestor of the owner, who avenged his enemies by their noses and ears.
Image by Postcrosser on Wikimedia under Creative Commons License.
5

Initially built around 1563 by architect Bernardino County on behalf of John the Baptist and Andrew Spinola, of the powerful family of Spinola, Palazzo Doria looks like a solid cube without any external decoration. The building underwent radical changes, building up a second floor, due to centuries of property transition of the Doria family, the lords and marquis of Montaldeo. Severely damaged during bombing in the war with France, its facade was further revised and completed, as well as enriched with stucco and pairs of pilasters at intervals. Inside, of considerable value are the eighteenth-century rococo stucco, precious furniture and room on the floor and the vault frescoes by Luca Cambiaso with the Fall of Phaeton and the Fall of Icarus. It is located at 6 Via Garibaldi.
Image by Twice25 & Rinina25 on Wikimedia under Creative Commons License.
6

Built in 1558, Palazzo Angelo Giovanni Spinola had as its first owner, a businessman and financier of the Spanish Empire, whose name is now used to identify the palace. The building has a monumental character due to the exceptional height and size of rooms, and to the solemnity of the path from the porch to the lodge patio, and from this to the upper loggia to the salon floor. The decorative themes are all inspired from the ambitiously grandiose epic Livy character, but cold and formal.
Image by Postcrosser on Wikimedia under Creative Commons License.
7

Palazzo Lomellino is an outstanding Bergamasco style edifice, built between 1563 and 1569, by a designer who was able to introduce the latest Genoa suggestions of Mannerist culture. The facade is driven by a rich stucco decoration, with winged male herms, holding up the frame of the ground floor with string, tapes and ribbons. The building's salon is decorated with Thomas Aldovrandini' work and enriched by a series of paintings with stories told by Diana Marcantonio Franceschini.
Image by Postcrosser on Wikimedia under Creative Commons License.
8

Number 8 and 10 of Via Garibaldi is the joint palace of two houses. Lazarus and Giacomo Spinola had the Palazzo Cattaneo Adorno at number 8 Via Garibaldi, built between 1583 and 1588. Beautiful outside architecture, valuable furniture and ornaments, rich and famous paintings on the inside, the palace still retains its Italian historic flare. Built in 1562, Palazzo Cattaneo-Adorno at 10 Via Garibaldi is represented by the frescoes of Andrea Semino and the artwork of Bergamasco. Its edifice endured a series of renovations during its existence, either at the will of the owners, or due to the events of World War II.
Image by Twice25 & Rinina25 on Wikimedia under Creative Commons License.
9

Palazzo Campanella is located at number 12 and was built in 1562 according to a design by John Baldassarre Lomellini Ponzello. In 1917 it was bought by the owner, then Tito Campanella, who established his own offices and lived on the second floor. Today it is open to the public on the first floor where you can admire the frescoes of the seed and a romantic room built at the beginning of the nineteenth century by Michael Canzio.
Image by big camera on Flickr under Creative Commons License.
10

Palazzo delle Torrette occupies two of the civic numbers of Via Garibaldi, 14 and 16, and derives its name from two towers that complement the sides of the building. Like the nearby Red Palace, it was built at different times in Via Garibaldi, since 1716. Its construction - designed by Giacomo Viano on behalf of the Duke of Tursi Giovanni Andrea Doria - was necessary to complete the urban tract in front of the imposing Palazzo Doria Tursi and somewhat block the views of the crumbling houses of the Medieval area below.
Image by Cebete on Flickr under Creative Commons License.
11

Head of municipal administration since 1848, Palazzo Doria Tursi is by far the most impressive and important building of the Via Garibaldi. Two large balconies and spectacular elevated lodges - added in 1597, when the palace became the property of Giovanni Andrea Doria - frame the main building. The facade is characterized by alternating materials of different colours: pink stone of Finale, the gray-black slate and the fine white marble from Carrara. The main facade consists of two overlapping orders. The majestic marble portal is crowned by the emblem of the city of Genoa. Nowadays, the Palace is a museum dedicated mainly to the art of Italian musician Niccolo Paganini.
Image by William Domenichini on Wikimedia under Creative Commons License.
12

The Red Palace is a valuable building in the historic center of Genoa, one of the World Heritage Humanity by UNESCO. One of the newer buildings in Via Garibaldi, takes its name from the characteristic genovian red colour that distinguishes it, obviously in a relative sense. It houses the Galleria di Palazzo Rosso, a major city gallery together with those of nearby Palazzo Bianco and Palazzo Doria Tursi, which is the main Museum of Via Garibaldi. Built between 1671 and 1677 by architect Pietro Antonio Corradi upon the wish of Rudolph and Giovanni Francesco Brignole Sale, this historic construction is of great beauty and architectural delight. Addmission fee is 7 Eur every day, except for Sundays.
Image by ScaniaTheKing87 on Flickr under Creative Commons License.
13

Palazzo Bianco (English: White Palace) is one of the main buildings of the center of Genoa, Italy. It is situated at 11, via Garibaldi (known at one time as Strada Nuova, and before that, Via Aurea). It contains the Gallery of the White Palace, one of the greater city art galleries, and together with those of its neighbors Palazzo Rosso and Palazzo Doria Tursi, it forms part of a cluster of museums at that end of the street. Constructed between 1530 and 1540 by Luca Grimaldi, a member of one of the most important Genoese families, in 1658 the palace passed into the possession of the De Franchi family, and in 1711 it was given by Federico De Franchi, its inheritor, to Maria Durazzo Brignole-Sale, his main creditor. The gallery offers a panorama of European painting from the 12th century to the 17th century, with a large prevalence of Genoese, Flemish, French and Spanish painters.
Image by Alessandro.photographer on Wikimedia under Creative Commons License.
Sight description based on wikipedia