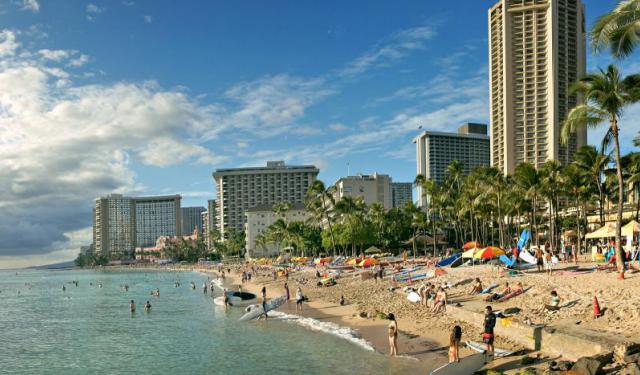 Waikiki or Waikiki Beach is a beachfront area of Honolulu famed for its long rolling ocean break, ideal for boarding and surfing. Waikiki is also home to public places, such as Kapiolani Park, high-end resort hotels (Royal Hawaiian), and abundance of luxury brand stores concentrated on Kalakaua Avenue, the neighborhood's main thoroughfare. Once the playground of Hawaiian aristocracy, today Waikiki greets visitors from all walks of life. Take this self-guided walk and enjoy the delights of Waikiki Beach in a true Aloha spirit!
How it works: Download the app "GPSmyCity: Walks in 1K+ Cities" from iTunes App Store or Google Play to your mobile phone or tablet. The app turns your mobile device into a personal tour guide and its built-in GPS navigation functions guide you from one tour stop to next. The app works offline, so no data plan is needed when traveling abroad.

The Waikiki Aquarium is the third oldest public aquarium in all of the U.S. Built next to a living coral reef on the Waikiki shoreline, it is home to more than 3,500 organisms of 490 species of marine plants and animals. Each year, over 330,000 people visit, and over 30,000 schoolchildren participate in the Aquarium's education activities and programs.

Interestingly, the Aquarium was created in 1904 by the Honolulu Rapid Transit Authority. They hoped that having an aquarium at the end of the trolley line would help entice more people to ride it.

Why You Should Visit:
While it may be smaller than other aquariums, the layout is nice, there's plenty to see, and the staff is very helpful and nice.
Recommended as a nice simple thing to do; a comfortable, relaxed stroll. You can see everything within an hour.
AC on the inside; hands-on experience on the outside, plus viewing of seals and some places to picnic.

Tip:
If you are a student, bring your student ID for a discount.


Image by Meowmeow10 on Wikimedia under Creative Commons License.
Sight description based on wikipedia
2

Waikiki Beach is a narrow stripe of sand that stretches from Hilton Hawaiian Village to Diamond Head. A few miles long, it is one of the best-known beaches in the entire world, due to its clear and safe water. It is visited by a large number of swimmers and surfers every year. This Pier represents a perfect place for looking out at the incredible blue Pacific, especially at sunset or sunrise. Watch out for rainbows, which are commonly seen in Hawaii.

Tip:
If you're looking for a less crowded beach to have more room for yourself, this is where you'll find it.
Image by Dan Bolinger on Wikimedia under Creative Commons License.
3

Queen Kapiolani lived between 1834-99. She was named for her great-aunt, High Chiefess Kapiolani, who made a dramatic display of her conversion to Christianity and defied the volcano goddess, Pele. Queen Kapiolani traveled to London for Queen Victoria's 50th Jubilee, along with Princess Liliuokalani. She also established the Kapiolani Maternity Home, where mothers and their newborn babies could receive post-natal medical care. After the overthrow of the Hawaiian monarchy, she moved to her home in Waikiki, where she died at age 64.

Kapiolani Park was made a park because the land was largely unsuitable for anything else. Archibald Cleghorn, a Scotsman who married into Hawaiian royalty, designed the park's landscaping and plantings. After the royal family was overthrown, the park was given to the Republic of Hawaii. Legally, it was decreed that the park be permanently set aside as a public park, with no part of it going up for sale or lease, and no entrance fees. The park is home to the Honolulu Zoo and Waikiki Shell, tennis and basketball courts; soccer, baseball, lacrosse, and rugby fields; an archery range; and a bandstand.

Why You Should Visit:
On one hand, it is clean, quiet and peaceful – full of beautiful flowering shrubs, trees, and gorgeous birds.
On the other hand, it also is the site of many festivals, craft fairs, art sports, art shows and music events.

Tip:
Check the schedule when you arrive so as not to miss some free entertainment and local flare. And make sure you have your sunscreen with you!

The Honolulu Zoo has the distinction of being the only zoo in the entire United States to be established with money from a sovereign monarch. It is located on three hundred acres of Kapiolani Park, named for Queen Kapiolani.

The Park was originally established by King David Kalakaua, the Queen's husband. The natural ponds and marshes in the swampy area were cleaned up and beautified, and the park was opened in 1877. In 1914, after the overthrow of the Hawaiian monarchy, the City & County of Honolulu named Ben Hollinger as its new Administrator of Parks and Recreation. Now in charge of Kapiolani Park, Hollinger began collecting animals to showcase, including a monkey, lion cubs, and a honey bear. When a steamship arrived in Honolulu Harbor with a live elephant on board, Hollinger begged the City & County of Honolulu to buy the animal for the park. Once the elephant, “Daisy,” was purchased, Honolulu finally had a zoo.

During the Depression, the Zoo began to fall into disrepair as few people were able to afford the luxury of visiting it. In the 1990s, the Honolulu Zoo experienced a resurgence of enthusiasm, when its exhibits were redesigned to more closely mimic their animals' natural habitats. Today, the Honolulu Zoo has over 1,230 animals and sees over 600,000 visitors every year.

Why You Should Visit:
Many cool birds of all different varieties, and the most playful, acrobatic gibbons you'll ever see!
The layout is linear enough that you don't need to constantly check the map, but twisty and windy enough that you feel like you're on an adventure.

Tip:
Best going early in the morning, when it's cooler in the afternoon, or in the cooler months, as the animals like to stay in the shade.
Alternately, if you have a chance, do a night trip when available – it's a very different experience with the nocturnal animals up and about.

The Royal Hawaiian Hotel was one of the first hotels established in Waikiki, in 1927. When steam travel to Hawaii became more effective, many of America's wealthiest families went to visit the island. Captain William Matson, of the Matson Navigation Company, realized that they needed a suitably luxurious place to stay. So, he put forth the idea of creating a hotel in Honolulu to accommodate his wealthy passengers. At first, he purchased the Moana mansion and converted it into a hotel. When it was successful, he went on to build the Royal Hawaiian Hotel.

The Royal Hawaiian took roughly a year and a half to build, cost approximately $4 million USD, and was handled by architects Warren and Wetmore (designers of the New York Biltmore Hotel, Asbury Park Convention Hall, and Atlantic City Ritz-Carlton). It is six stories tall, and was decorated in the Spanish and Moorish styles popular during the 20s. Similarly, the hotel's bright pink color comes from the pink decorating craze during the era in which it was built. As soon as the doors opened in 1927, the hotel was wildly successful. Visitors included statesmen, movie stars, Princess Abigail Kawananakoa, and Olympic medalist Duke Kahanamoku.
Image by Gerald Farinas on Wikimedia under Creative Commons License.
Sight description based on wikipedia