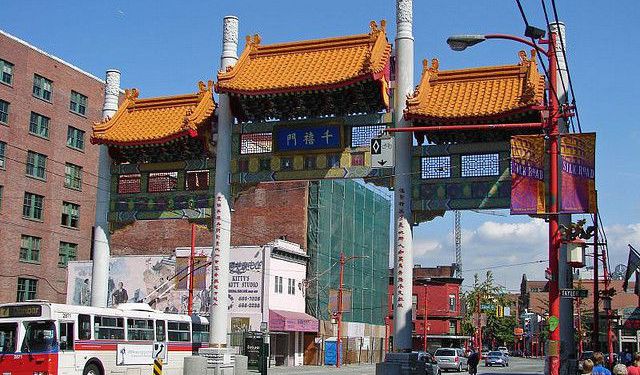 Image by sjdunphy on Flickr under Creative Commons License.

Walking Tour of Chinatown in Vancouver (Self Guided), Vancouver

Vancouver's Chinatown is North America's second largest Chinese-centered area. It attracts many tourists with its expressive culture, food, and fabulous traditional architecture. This walking tour will guide you to the most significant attractions in Chinatown.
How it works: Download the app "GPSmyCity: Walks in 1K+ Cities" from iTunes App Store or Google Play to your mobile phone or tablet. The app turns your mobile device into a personal tour guide and its built-in GPS navigation functions guide you from one tour stop to next. The app works offline, so no data plan is needed when traveling abroad.

Vancouver's Millennium Gate sits at the entrance of Chinatown, and was built to honour the people of China. The name derives from the fact that the gate was constructed in 2002 to mark the turn of the millennium, and honour the role that Chinese people have played in Vancouver's long, colourful history.

The four pillar, three story tall gate is guarded by two stone foo lions, one male with a ball under his paw on the left side, and a female with cub on the right side. Images of Chinese people adorning the gates show different styles of clothing worn across China. One interesting feature of the Millennium Gate is its colour scheme, since it's a blend of traditional Eastern and modern Western motifs. The gates feature the traditional colours of red, yellow, and gold, as well as white, and blue, colours that are traditionally reserved for funerals.

Vancouver's Chinatown is a living symbol of its multicultural heritage. It serves as a place where people of every ethnicity gather to visit shops and restaurants, and its people are an integral part of the community. Nowhere is that more evident than in the design of the Millennium Gate.

Image by Iversonic on Flickr under Creative Commons License.
2

Historical Alley marks the area where Vancouver's earliest Chinese settlers made their home. Originally comprised of Canton and Shanghai alley, this area housed over one thousand Asian-Canadian residents, and was home to stores, restaurants, opera, and cultural activities.

Shanghai Alley was the first part of Historical Alley to be constructed and inhabited. Later, in 1904, Canton Alley was built. Residents constructed a Chinese style courtyard surrounded with residential and commercial buildings in two parallel, southward running rows. The heart of Historical Alley was the five hundred seat theater built in 1898, surrounded by restaurants and shops. This gave residents of Chinatown a way to enjoy Chinese-language entertainment, food, and company without having to leave their area of Vancouver. This resulted in a tightly woven Chinese-Canadian community that could spend their entire lives without having to leave Vancouver's Chinatown.

The end result of Historical Alley is a Chinatown that's the second largest in all of North America, and one of the most visited by ethnic Chinese from outside of Vancouver. People of all races and nationalities come to Vancouver's Historical Alley for food, shopping, entertainment, and cultural events, as well as to view the Millennium Gate marking the entrance to Chinatown.

Image by SqueakyMarmot on Flickr under Creative Commons License.
3

The Sam Kee Building has the rather odd distinction of being the shallowest commercial building in the world.

The building was originally built by one of Chinatown's wealthiest firms, the Sam Kee Company, in 1903. The basement level of the building was designed to hold public baths, while the ground floor held commercial buildings, and the top level was residential.

Dr. Sun Yat-Sen Garden is a classical Chinese garden and the first of its kind to be built outside of China. It is located in Vancouver's Chinatown and is home to a public park and a garden that's accessible with an admission fee.

The Garden itself was created to serve as a liaison between Chinese and Canadian culture in Vancouver, and act as a place where members of the community could gather. The garden portion is home to many specimen plants chosen for their blooming schedule, which causes the garden to change dramatically with every change in season. It also relies on the philosophical concepts of Taoism and Feng Shui for its layout and design, while the public park portion is similar to most Western parks and gardens.

The garden is named for Dr. Sun Yat-Sen, the first president of the Republic of China. During his travels to further the cause of the Chinese nationalist movement, he spent an extensive amount of time in Vancouver. This, coupled with the number of Chinese nationalists then living in Vancouver, led to the Garden being named in his honor.

Why You Should Visit:
The yin-yang of the white walls and black roof, the leak windows and hidden symbolism within the entire place is very interesting.
Part of the garden is free to the public; however, a guided tour is included with paid admission and adds a lot to the overall experience.
If unsure, you can always try the park first as it is free and has a little pond, bridges and beautiful views.

Tip:
Koi carp feeding happens once a day at around 11:30am from May-October so if you're there, be sure to watch it.
Otherwise, try the tea and explore whatever exhibit is showing at the time.

The Monument of Canadian Chinese is a structure created to commemorate the Chinese people's contribution to Canada's history. It is located on the edge of Vancouver's Chinatown area, the second largest Chinatown in all of North America.

The Monument is constructed of light coloured rock, flanked by two bronze statues. One of the statues is a railway worker, to commemorate the many, many Chinese railway workers that helped lay track for the transcontinental railroad, some of whom lost their lives while performing back breaking labour. The other statue is a World War II soldier, to commemorate the Chinese-Canadians that enlisted to fight in the war. Their bravery eventually earned them the right to vote in 1945, and furthered their acceptance in mainstream Vancouver society. This monument also serves as a focal point for Remembrance Day ceremonies in Chinatown.

This monument serves as a reminder of Vancouver's multiculturalism, as well as a testament to the hundreds of Canadian residents of Chinese descent who have paid the ultimate price to help make Canada great. Vancouver would not be the city it is today without the sacrifices of thousands of Chinese people, and the Monument of Canadian Chinese is Vancouver's way of acknowledging their place in Canadian history.
Image by SqueakyMarmot on Flickr under Creative Commons License.
6

Despite the contributions of Chinese-Canadians to Canada's history, cities like Vancouver were plagued by anti Chinese sentiment for years. It took until 1945 for Chinese-Canadians to be granted the right to vote, despite the fact that many of them slaved to build Canada's transcontinental railroad, and enlisted in World War II. The Chinese Cultural Center and Museum honours their sacrifices, and serves as a means of preserving the historical contributions of Chinese-Canadians. The Museum is home to artifacts and archives dating back to the Gold Rush, when anti Chinese sentiment was at its highest, and many Chinese people sacrificed their lives to make Canada great.

The Chinese Cultural Center and Museum is located in Vancouver's Chinatown, the second largest Chinatown in all of North America. Visitors can call ahead to book a tour of the Museum itself, and can contact the center to ask about workshops, classes, and other programs. The Cultural Center gives visitors the opportunity to learn about traditional Chinese calligraphy, tai chi, and more.

The Chinese Museum and Cultural Center is located near Dr. Sun Yat-Sen Garden. If you are planning a tour of Vancouver's Chinatown area, no visit can be complete without a stop at the Museum to learn about Chinese-Canadian history, and the Garden for a relaxing walk.

Walking Tour of Yaletown in Vancouver

For many years Yaletown has been the thriving industrial heart of Vancouver. This area of the city looks unlike any other and is considered to be the home of Vancouver's "elite" society. This walking tour will take you to the most significant Yaletown spots.