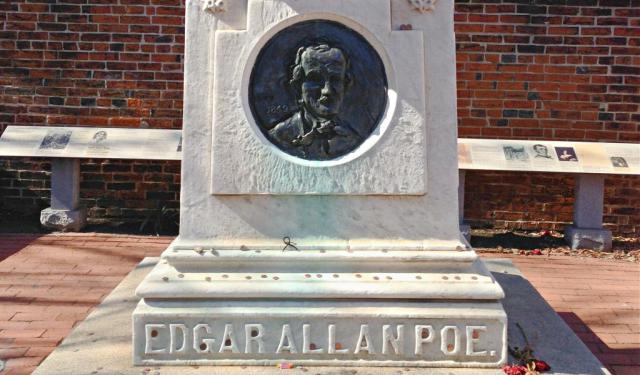 Image by Steve on Flickr under Creative Commons License.

Baltimore has many great landmarks that reflect the city’s interesting and rich history. Many of these monuments are related to war due to Baltimore's key role in the War of 1812. Don’t miss the opportunity to visit the U.S.S. Constellation or admire amazing horse sculptures at the War Memorial.
How it works: Download the app "GPSmyCity: Walks in 1K+ Cities" from iTunes App Store or Google Play to your mobile phone or tablet. The app turns your mobile device into a personal tour guide and its built-in GPS navigation functions guide you from one tour stop to next. The app works offline, so no data plan is needed when traveling abroad.

The U.S.S. Constellation is one Baltimore's must see attractions. Commissioned in 1855, it was the last all-sail ship made by the United States. Visitors are welcome to climb aboard and find out the ship’s history, from Civil War participation to its role in disrupting the slave trade. Located in the Inner Harbor since 1999, it's open to visitors daily.
Image by Fristle on Flickr under Creative Commons License.
Sight description based on wikipedia
2

The Holocaust Memorial and Sculpture is located near the Inner Harbor. This work by sculptor Joseph Sheppard was erected in memory of the six million Jews who were murdered by Nazis during World War II. Open daily with free admission.
Image by sneakerdog on Flickr under Creative Commons License.
3

The War Memorial is situated near City Hall. At the entrance you'll find amazing horse sculptures created by Edmond R. Amateis. It is said they symbolize America crossing the ocean to help the Allies. First erected in memory of those who died during World War I, today the memorial stands as a testament to all Marylanders who died in war throughout history.
Image by Baltimore Heritage on Flickr under Creative Commons License.
4

The tower was built by Jacob Wolfe using bricks manufactured by the Burns and Russell Co. of Baltimore. The circular brick structure's walls are 4.5 feet (1.4 m) thick from the bottom to about 50 feet (15 m) up; then they narrow in stages of 4 inches (10 cm) each, until at the top the thickness is 21 inches (53 cm).

Image by Steelplug on Wikimedia under Creative Commons License.
Sight description based on wikipedia
5

Built in 1793, it was the home of Mary Pickersgill when she moved to Baltimore in 1806 and the location where she sewed the "Star Spangled Banner," the garrison flag that flew over Fort McHenry in the summer of 1814 during the Battle of Baltimore in the War of 1812. The museum contains furniture and antiques from the period as well as items from the Pickersgill family. A 12,600-square-foot (1,170 m2) museum was constructed next to Pickersgill's house. It has exhibits on the War of 1812 and the Battle of Baltimore.

Image by E. H. Pickering on Wikimedia under Creative Commons License.
Sight description based on wikipedia
6

Built in 1935, the USCGC Taney served in World War II, Vietnam and Korea. This navy vessel was named after Roger B. Taney, the twelfth Attorney General. Decommissioned in 1986 and transported to Baltimore, it now serves as a floating museum.
Image by goldberg on Flickr under Creative Commons License.
7

The Seven Foot Knoll Light was built in 1855 and is the oldest screw-pile lighthouse in Maryland. It was initially installed on a shallow shoal, Seven Foot Knoll, at the mouth of the Patapsco River.

Constructed of 1-inch (25 mm) rolled iron, the lighthouse consists of three main sections. The gallery deck was located 9 feet (2.7 m) above the average high tide waters. The house was the second section, sitting directly atop the gallery deck. This is where the keeper and his family would live. Atop the housing area was the third section of the lighthouse, the light beacon. A 4th order Fresnel lens was housed in the small light compartment. It was visible for 12 miles (19 km).

In 1997 the lighthouse was transferred to the Baltimore Maritime Museum where it is located today. It was placed on the National Register of Historic Places on August 22, 1989. The lighthouse is a contributing element in the Baltimore National Heritage Area.
Image by Rob Shenk on Flickr under Creative Commons License.
Sight description based on wikipedia