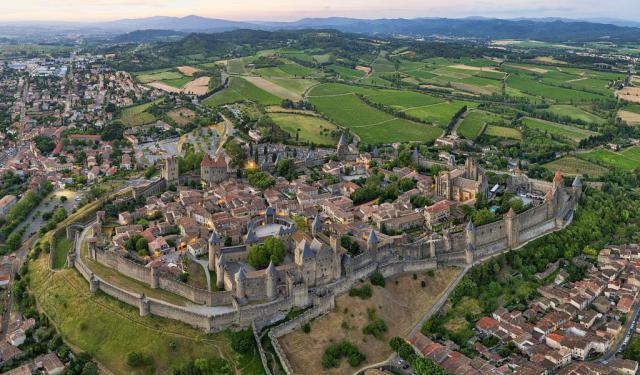 Image by Chensiyuan on Wikimedia under Creative Commons License.

Perched atop a hill in Southern France's region of Languedoc, the town of Carcassonne is noted primarily for its medieval citadel, La Cité, surrounded with numerous watchtowers and double-walled fortifications. Another key local attraction is a 12th-century Château Comtal, situated within the Cité, replete with archaeological findings and inner ramparts. To explore these and other historic sights of Carcassonne, follow this orientation walk!
How it works: Download the app "GPSmyCity: Walks in 1K+ Cities" from iTunes App Store or Google Play to your mobile phone or tablet. The app turns your mobile device into a personal tour guide and its built-in GPS navigation functions guide you from one tour stop to next. The app works offline, so no data plan is needed when traveling abroad.

Square Gambetta is a large square in Carcassonne on the other side of the river Aude and the famous Cité. With this square begins the old walled city, built by King St. Louis of France: La Bastide de Saint Louis. Walking around the square you can visit Musée des Beaux-Arts, the Central Library as well as different shops and cafes.
Image by Andy_Mitchell_UK on Flickr under Creative Commons License.
2

According to notarial acts, the little chapel Notre Dame de la Santé was built with money from the legacy of Jean de Saix, in 1527, as a hospital for those suffering from the plague. It was considered a faithful guard in that strategic location, the narrow passage between fortified buildings. On December 18, 1685, it was agreed to expand the chapel beside the south wind on the river Aude.
Image by Flickr.Whisker on Flickr under Creative Commons License.
3

The Garden Maria et Pierre Sire is a beautiful, green space in front of the administrative buildings in the neighborhood of Trivalle. It received its name after the city's council decided to honour the memory of the distinguished writer, Pierre Sire, and his wife, Maria, director of the School of Cité.
Image by Pinpin on Wikimedia under Creative Commons License.
4

La porte Narbonnaise opening on the eastern flank of the Medieval city is a complex structure combining the various elements of the military devices, prestige and comfort. It dates from the building of the second wall, at the end of the thirteenth century. By entering this eastern door, one first crosses the barbican St. Louis, providing advanced protection of the door. Even if one can question its usefulness, porte Narbonnaise is more than imposing, with its two tall towers pierced with loopholes that bar the way.
Image by Florent Pécassou on Wikimedia under Creative Commons License.
5

This amazing castle was built in 1150 by Bernard Aton on the remains of a Gallo-Roman building. Originally, it consisted of two main buildings as well as the watch Tower of Pinte, over 30 meters high. Later the French enlarged and surrounded the castle, strengthening it into a fortress within the fortress. The building served successively as a stately home, the home of the King of France, military space and a prison before becoming a lapidary museum, which houses a beautiful collection of statues, sarcophagi and other artifacts found in the region, dating from antiquity and the Middle Ages.
Image by Jonaslange on Wikimedia under Creative Commons License.
6

The Cité de Carcassonne is a medieval citadel located on a hill on the right bank of the River Aude, in the south-east part of the city proper.

Founded during the Gallo-Roman period, the citadel derives its reputation from its 3 kilometres (1.9 mi) long double surrounding walls interspersed by 52 towers. The citadel was restored at the end of the 19th century and in 1997 it was added to UNESCO's list of World Heritage Sites. An image of the historic city of Carcassonne appears on the emblem of local rugby league team, AS Carcassonne.

Image by Mikel Santamaria on Flickr under Creative Commons License.
Sight description based on wikipedia
7

The Basilica of St. Nazaire and St. Celse (Basilique Saint-Nazaire-et-Saint-Celse de Carcassonne), is a basilica minor in Carcassonne, southern France, listed as a national monument of the country. It was formerly the cathedral of Carcassonne until 1801, when it was replaced by the present Carcassonne Cathedral.

The present church is in origin a Romanesque of the 11th century, consecrated by Pope Urban II in 1096. It was built on the site of a Carolingian cathedral, of which no traces now remain. The crypt too, despite its ancient appearance, dates from the new construction. The church was enlarged between 1269 and 1330 in the Gothic style then predominant in France, largely at the expense of the Bishop of Carcassonne, Pierre de Rochefort. The exterior was largely renewed by Viollet-le-Duc, while the interior has largely remained the Gothic original.

Image by Jean-Pol GRANDMONT on Wikimedia under Creative Commons License.
Sight description based on wikipedia
8

To the west, Porte de l'Aude is the path that connects the Medieval city of Carcassonne to the lower town, on the other side of the course of the Aude. Situated not far from the Château Comtal, it is established in the slightly steep point of the city's hill, accessible by a ramp winding along the slope. The door has a historical significance and represents the beginning of the great trip along the city.
Image by Jean-Pol GRANDMONT on Wikimedia under Creative Commons License.
9

The church Saint-Gimer was built between 1854 and 1859, by architect Eugène Viollet-le-Duc. Modesty was one of its stated goals; it has a nave and two aisles and a polygonal apse stationed on two vestries, all preceded by a porch. For this church, whose agenda is that of a single parish, Viollet-le-Duc preferred simplicity, while appealing to a repertoire of forms that could be called "Gothic", but not hesitating to create new forms.
Image by Pinpin on Wikimedia under Creative Commons License.
10

Carcassonne Cathedral (Cathédrale Saint-Michel de Carcassonne) is a cathedral and designated national monument in Carcassonne. It is the seat of the Roman Catholic Bishop of Carcassonne. The building was built in the thirteenth-century as a parish church, dedicated to Saint Michael. Following war damage in the fourteenth century it was subsequently rebuilt as a fortified church. In 1803 St Michael's was elevated to cathedral status, replacing the pre-Revolutionary cathedral dedicated to Saints Nazarius and Celsus. The old cathedral now serves as the Basilica of St. Nazaire and St. Celse.
Image by Florent Pécassou on Wikimedia under Creative Commons License.
Sight description based on wikipedia
11

Situated in the former Présidial, overlooking the boulevards with plain trees, the Museum of Fine Arts is a must-see place for those that want to know more about the culture of the city. The collections of the Museum of Fine Arts represent a rich panorama of Western paintings of seventeenth-twentieth centuries. Visitors can also find a collection of ceramics, tapestries and objects of art.
Image by Deruyver on Wikimedia under Creative Commons License.
12

Chapelle des Dominicains, situated on Rue de Verdun, was built in the Gothic Languedoc style as were the majority of religious sites in the city, with stained glass windows and beautiful decorative elements. The chapel often hosts different expositions and meetings, thus having an important cultural role.
Image by cyrildoussin on Flickr under Creative Commons License.
13

Place Carnot is one of the most important places in the centre of the city; it is popular among locals, tourists and pedestrians. The municipality organizes live performances and shows on the podium, as well as a fruit and vegetable market. No traffic is allowed here, so people can quietly walk and enjoy the fountains, statues and cafes.
Image by jeremydeades on Flickr under Creative Commons License.
14

Eglise des Carmes has an important historic value, proving that certain regions had their own chapel. It consists of a nave 12 m wide and 17 m long, bordered by twelve chapels of the nineteenth century, of which only ten remained. It was built according to the same plan as the Cathedral of St. Michael and St. Vincent Church, in Gothic Languedocien style, and it is a rather plain church, but not without decorations, paintings and sculptures.
Image by mescladis.free.fr under Creative Commons License.
15

The hotel Terminus is located on the left bank of the Aude, in the heart of the Bastide. It kept the stylish ambiance of the 1900s thanks to its beautiful facade and staircase, considered a valuable element of Fine Arts. Opened in June 1914, the Terminus covers an area of 2,500 m2, having four levels with 125 rooms and apartments at the cutting edge of modernism.
Image by ktylerconk on Flickr under Creative Commons License.
16

The Pont Marengo (Marengo bridge) crosses the Canal du Midi and links Carcassonne to the local railway station. The lock is very busy and a favourite tourist attraction as the canal boats work their way along the canal. The plaque on the bridge dates the work to 1800 or as it also says year 8, measuring time in the new republic. The bridge is named after the Battle of Marengo at which Napoleon defeated the Austrians in 1800. A little way down from the bridge the railway line crosses the canal and here there is a small plaque and garden commemorating the maquisards who were executed here by the Nazis.
Image by Andy_Mitchell_UK on Flickr under Creative Commons License.
Sight description based on wikipedia

Carcassonne is remarkable for its impressive churches and cathedrals. The majority of them were built in Gothic Languedoc style and are noteworthy given their stained glass windows, large choirs and interesting architectural elements. Take this tour and discover them all.