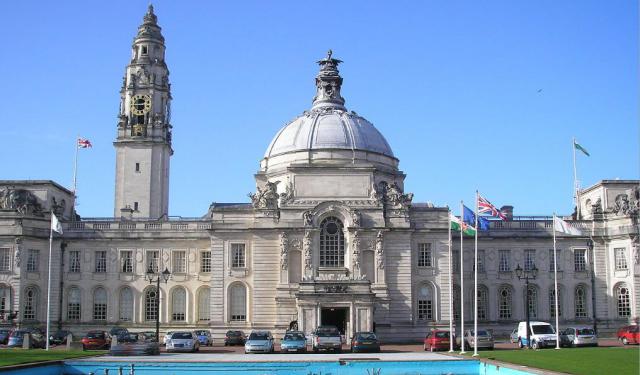 The capital of Wales Cardiff is an exciting tourist destination, rich in historic sights and places to visit. The city center and Cardiff Bay area are particularly popular with visitors for the number of cultural locations contained - museums, theaters, art centers and more. Take this self-guided tour and have a great time exploring key attractions of Cardiff.
How it works: Download the app "GPSmyCity: Walks in 1K+ Cities" from iTunes App Store or Google Play to your mobile phone or tablet. The app turns your mobile device into a personal tour guide and its built-in GPS navigation functions guide you from one tour stop to next. The app works offline, so no data plan is needed when traveling abroad.

City Hall is a civic building in Cathays Park, Cardiff. Built of Portland stone, it became the fifth building to serve as Cardiff's centre of local government when it opened in October 1906. The competition to design a town hall and adjacent law courts for Cardiff was won in 1897 by the firm of Lanchester, Stewart and Rickards. Construction was carried out by local builders, E. Turner and Sons. Cardiff received its city charter while construction was underway, in 1905. The building is an important early example of the Edwardian Baroque style.

Image by Yummifruitbat on Wikimedia under Creative Commons License.
Sight description based on wikipedia
2

National Museum Cardiff is a museum and art gallery in Cardiff, Wales. The museum is part of the wider network of Amgueddfa Cymru – National Museum Wales (formerly the National Museums and Galleries of Wales). Entry is free thanks to a grant from the Welsh Assembly Government. The National Museum of Wales was founded in 1907, when it inherited the collection of the Cardiff Museum, which shared the building of Cardiff Central Library. Construction of a new building in the civic complex of Cathays Park began in 1912, but owing to the First World War, it did not open to the public until 1927. The architects were Arnold Dunbar Smith and Cecil Brewer, although the building as it now stands is a heavily truncated version of their design. The museum has collections of archaeology, botany, fine and applied art, geology and zoology.

Image by TFDuesing on Flickr under Creative Commons License.
Sight description based on wikipedia
3

The New Theatre is one of the principal theatres in Cardiff and celebrated its centenary in 2006. It is located in Cardiff city centre on Park Place, close to Cathays Park. The theatre has a capacity of 1,144, and hosts a number of touring productions including Musical theatre, plays and children's shows and also presents an annual Christmas pantomime.

The building was constructed from brick and Bath Stone and opened to the general public on 10 December 1906. The first public performance was a performance of William Shakespeare’s Twelfth Night. The artists that have performed on stage at the New Theatre have included Sarah Bernhardt, Anna Pavlova, Laurel and Hardy, Tom Jones, Tommy Cooper and Shirley Bassey. The theatre also hosts all the rounds of the Song Prize of the BBC Cardiff Singer of the World competition, apart from the final night, which is held in St David's Hall.

The original church was built at a cost of £2,124 in 1842, after fundraising in Wales and Ireland and a donation by Lady Catherine Eyre of Bath. The current building was designed by Pugin and Pugin Architects and constructed 1884-87. It was Cardiff's principal Catholic church, and it became seat of the Roman Catholic Archbishop of Cardiff in 1916. In 1920 it was declared the Cathedral Church of the new Archdiocese of Cardiff. The Cathedral was destroyed by World War II bombing in March 1941 when incendiary bombs pierced the roof. During the 1950's it was restored and rebuilt, under the supervision of F. R. Bates, Son, and Price and was re-opened in March 1959.

The stadium opened in June 1999, and the first major event to be held was an international rugby union match on 26 June 1999, when Wales beat South Africa in a friendly by 29–19, before a test crowd of 29,000. With total seating capacity of 74,500, it is the third largest stadium in the Six Nations Championship behind the Stade de France and Twickenham, which is the largest. It is also the second largest stadium in the world with a fully retractable roof and was the second stadium in Europe to have this feature.

Cardiff Market, also known as Cardiff Central Market, is a Victorian indoor market in the Cardiff city center, the capital city of Wales. The market was designed by the Borough Surveyor, William Harpur, and opened in May 1891. A farmers' market is known to have existed at the site since the 1700s. The market consists of two shopping levels, a ground floor and a balcony level which wraps around the exterior market walls on the interior. Entrances to the market are located at St. Mary Street, Trinity Street and from an alleyway off Church Street. There is a large H. Samuel clock above the High Street entrance, which was presumably donated by the H. Samuel jewellery chain, which once had a store just outside the High Street entrance. Traders in the market offer a variety of fresh produce, cooked food, various delicacies and more durable goods.

The Hayes is a commercial area in the southern city center of Cardiff. It is mostly pedestrianized and has an open-air snack bar. The area is home to the most fashionable brands in Cardiff, becoming the luxury shopping street of the city. At The Hayes one can find several famous buildings and structures, such as Cardiff Central Library, St David's Hall - a large performing arts and conference venue, St David's shopping center, the 25 meters (82 ft) high Alliance sculpture, and Café Quarter - an area packed with restaurants, bars and entertainment venues.
Image by Robin Drayton on Wikimedia under Creative Commons License.
Sight description based on wikipedia
10

Wales Millennium Centre is an arts centre located in the Cardiff Bay area of Cardiff. The site covers a total area of 4.7 acres (1.9 ha). The centre has hosted performances of opera, ballet, dance, comedy and musicals.

Locally nicknamed "the Armadillo", the Centre comprises one large theatre and two smaller halls with shops, bars and restaurants. It houses the national orchestra and opera, dance, theatre and literature companies, a total of eight arts organisations in residence. The main theatre, the Donald Gordon Theatre, has 1,897 seats, the BBC Hoddinott Hall 350 and the Weston Studio Theatre 250. In 2001 Lord Rowe-Beddoe was appointed chairman of Wales Millennium Centre, a company limited by guarantee. Board members include Sir Michael Checkland.

The Bute Dock Company was renamed the Cardiff Railway Company in 1897. The Pierhead became the administrative office for the Port of Cardiff in 1947. The 1897 clock mechanism, by William Potts & Sons of Leeds, was removed, being replaced with an electronic motor, and sold to an American collector in 1973. It was returned to Cardiff in 2005 and, in 2011, installed as a piece of contemporary art in Cardiff city centre.