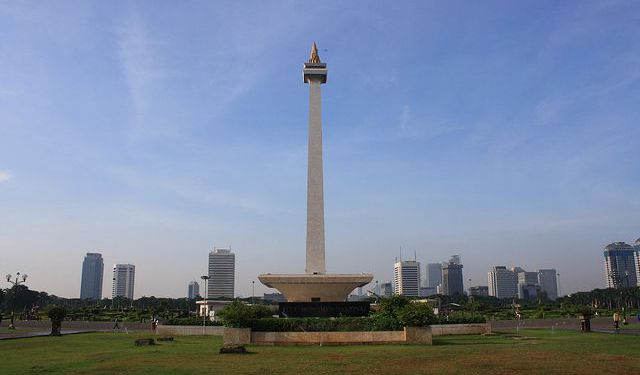 Jakarta, the capital of Indonesia, is a massive metropolis and a melting pot of cultures historically inhabiting the city – Asian and European – each leaving their imprint on the local architecture, language, cuisine, etc. Follow this orientation walk to explore some of the key sights of Central Jakarta to learn about the city's eventful past and present.
Image Courtesy of Flickr and Bonar Gultom.
How it works: Download the app "GPSmyCity: Walks in 1K+ Cities" from iTunes App Store or Google Play to your mobile phone or tablet. The app turns your mobile device into a personal tour guide and its built-in GPS navigation functions guide you from one tour stop to next. The app works offline, so no data plan is needed when traveling abroad.

Lapangan Merdeka or Freedom Square is the largest and most popular square in Jakarta. Placed in central Jakarta, the Merdeka Square measures one square kilometer and it is divided into four major areas corresponding to the four cardinal points. Thus, Taman Medan Merdeka Utara is located in the North and features a bust of Chairil Anwar (local poet) and an equestrian statue of Diponegoro (Javanese prince who opposed Dutch colonization). The Taman Medan Merdeka Timur is located in the East and features a statue of Kartini (Indonesian heroine) and a reflecting pond. On the South there is the Taman Medan Merdeka Selatan where tourists can admire a spotted deer park and a plant collection representing 33 Indonesian provinces. The parking lots and food stalls are concentrated here, too. Last but not least, the Taman Medan Merdeka Barat is located on the Western part and features the famous musical fountain. Magical shows are held here every night during the weekends, when the fountain is illuminated.

In the center of Lapangan Merdeka stands the National Monument, while numerous other touristic and administrative buildings trim the square. Merdeka Palace, Istiqlal Mosque and the National Museum of Indonesia are only few of the buildings with important touristic value located near Merdeka Square.

Designed by architects Frederich Silaban (the same architect who designed Istiqlal Mosque) and R.M. Soedarsono and built during the first Indonesian president, Sukarno, the Monas or National Monument is meant to commemorate the Indonesian people who fought for the national independence. The monument encapsulates Indonesian symbols such as the rice pestle (the upper part of the monument) and the mortar (the lower part of the monument), the numbers 17, 8 and 45 (August 17th, 1945 – the date when Indonesia’s Independence was proclaimed) and a gold plated flame called the Independence Flame, a pledge that the country will always remain an independent territory.

The monument measures 132 meters in height and features a larger part at the bottom (interpreted as the mortar or the yoni – female reproductive organs) and a high upper part (representing the pestle or the lingga – the phallus). In traditional beliefs, the monument is also a sign of people’s fertility and its power of surviving throughout the time.

The top part offers tourists a panoramic view over Jakarta. In sunny days, the ocean and Salak Mountain can be admired from the Observation Platform located on top of the monument, near the gold plated flame.

A classic building in the Palladian style with Roman and Greek elements, the Immanuel Church is the oldest Protestant church in Jakarta. Formerly known by the name of Willemskerk in honor of King Wilhelm I of the Netherlands, the church was built in 1835 under the rule of the above mentioned king. The church’s name was changed to Immanuel (“God be with us”) in 1948, after Indonesia gained its independence.

From an architectural point, the Gereja Immanuel boasts an incredible equilibrium and symmetry which give rise to an elegant and imposing silhouette. The building is structured on two stories, with the first one used for the religious ceremonies and the second one hosting the old organ (dating back from 1843).

Apart from the imposing architecture and the old, yet functional organ, a highly sought for attraction is the Bible printed in 1748, one of the oldest exemplars in the world.

Visits inside the church are permitted, but in order to fully experience the feeling this old church gives you and hear the organ play, it is recommended to attend a service here. The service is held in Bahasa Indonesia, English and Dutch.

The Gereja Immanuel is located near the Gambir Train Station, in the Gambir neighborhood, central Jakarta.
Image Courtesy of Wikimedia and CEphoto, Uwe Aranas.
4

The Ex-Mahkamah Agung, which has witnessed some of the most important justice resolutions, has functioned as Supreme Court during Dutch colonization as well as after the proclamation of Indonesia’s Independence. Nowadays, the Supreme Court has moved in the Freedom Square, next to the National Monument. Still, visitors can enjoy the elegant silhouette of the Ex-Mahkamah Agung, with its white columns and stylish architecture featuring European elements. A visit inside the building is possible and it is free of charge. However, a written notice is required three days in advance.
Image Courtesy of Wikimedia and Tropenmuseum, part of the National Museum of World Cultures.
5

The building is divided into two stories: the ground floor is dedicated to masses and religious events, while the second floor, originally designed to hold the choir, hosts a small religious museum. Visitors can admire here robes, religious books and relics of the Catholic rituals. In the back of the church there is a small candle factory which can also be visited.
Image Courtesy of Wikimedia and Gunawan Kartapranata.
6

Visitors can admire the marble-covered exterior from different parts of the city, but can also take a tour of the Mosque. Non-Muslim visitors are not allowed inside the main praying hall, though.
Image Courtesy of Wikimedia and Riezelaar.
7

Pasar Baru is one of the oldest markets in Jakarta. In this market you can find fashion products, shoes, bags, even salon equipment at low prices.
Image Courtesy of Wikimedia and Christophe95.
8

The building’s exterior can be admired from the Merdeka Square, while the inside of the building can be visited under strict rules of security. Special checking will be performed and only persons dressed decently will be allowed inside. Women wearing trousers are not granted access into the building.
Image Courtesy of Flickr and Ya, saya inBaliTimur.
9

Located opposite the Merdeka Palace and facing the Ciliwung River, in an exquisite neighborhood of old Batavia, Istana Negara or State Palace is a neoclassic building originally featuring two stories. The Negara Palace was built in 1796 and served as accommodation for J. A. van Braam, a Dutch businessman. In 1820 the building was sold to the Dutch authorities and became the official residence of the General-Governor during his stay in Batavia.

In 1848, the second story was demolished and the ground floor was enlarged so as to make the building more suitable for formal events and diplomatic meetings.

Nowadays Istana Negara serves as a venue for official meetings, presidential visits and state affairs. Banquets and formal events are also held inside the Negara Palace.

Visitors are allowed only after a thorough check. Women wearing trousers are not granted access into the palace.
Image Courtesy of Wikimedia and Tropenmuseum, part of the National Museum of World Cultures.