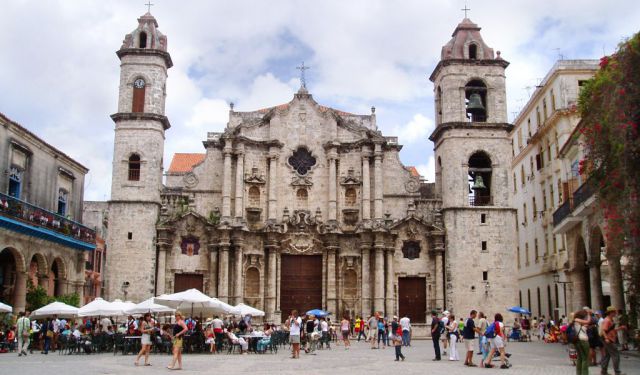 Image by akasenn on Wikimedia under Creative Commons License.

Discovered and conquered by the Spaniards, Havana has turned into a major religious center of Catholicism in the Caribbean. Although a communist regime is in power at the moment, many of the churches, cathedrals, and other religious buildings are preserved and still give a glimpse of the religious heritage of Havana.
How it works: Download the app "GPSmyCity: Walks in 1K+ Cities" from iTunes App Store or Google Play to your mobile phone or tablet. The app turns your mobile device into a personal tour guide and its built-in GPS navigation functions guide you from one tour stop to next. The app works offline, so no data plan is needed when traveling abroad.

Saint Francis of Paula Church used to serve as a women's hospital in the past, but after the hurricane in 1730, it was destroyed and rebuilt to become a church. However, it was abandoned for some years before its latest restoration in 1946. The church has a unique Baroque architectural style.
Image by jdbradley on Flickr under Creative Commons License.
2

Iglesia del Espíritu Santo is the earliest-built christian church in the city of Havana. The church is well known for its possession of some exceptional images on linen, plus a crypt with catacombs. Built in 1638, it's also the only church in Havana to give political asylum. The bell tower on the left side of the building is amongst the tallest buildings in the old part of the city.
Image by Aby R on Wikimedia under Creative Commons License.
3

Convento de Nuestra Senora de Belen was finished in 1718, and was given to the first members of the order of Bethlehem that arrived in Havana. After it had been the property of the Spanish government, it was taken by the Jesuits and enlarged. Today, the church has just one arch and a gate with beautiful stone statues depicting different saints.
Image by Pascal Zoghbi on Wikimedia under Creative Commons License.
4

Iglesia del Cristo was constructed in mid 17th century and in 1693, it was certified as a parish church by the most distinguished priest of the Cuban episcopate - Bishop Avelino de Compostela. There's a picture of Christ on the Cross inside the church, which is believed to keep travelers from harm. The Baroque motifs and its towers make the church unique.
Image by Rchard on Flickr under Creative Commons License.
5

Constructed by the Jesuits (1748–77) on the site of an earlier church, La Catedral de la Virgen María de la Concepción Inmaculada de La Habana (Cathedral of The Virgin Mary of the Immaculate Conception) is also dedicated to Saint Christopher, thus it is sometimes dubbed as Catedral de San Cristobal.

Set in the former Plaza de La Ciénaga or Swamp Plaza, the Cathedral is said to be the only example of a baroque facade that was designed with asymmetrical features – one of the towers is wider than the other. This particular feature was conceived in order to allow the water that tended to accumulate on the plaza to freely flow through the streets during the colonial period when it was built.

Cuban writer Alejo Carpentier famously described the Cathedral as "music set in stone". In fact, its structure is notable for being built with a stone which is very different from what folks are used to in Europe. It lends it a particular color but it is really beautiful. Nearby there are terraces, music, and people all around offering drinks, food, cigars, and many more – the essence of the city.

Tip:
Note that despite the official opening times, the Cathedral is often locked, though you can sometimes gain access just before mass.
Admission is free – although there is a small charge if you wish to go up the bell tower – and there are free cover-ups for those with short shorts or bare shoulders.


Image by exfordy on Flickr under Creative Commons License.
6

Convento de San Francisco de Asis pays homage to the Corinthian and Doric styles, and it has a few remnants of early Baroque architectural style as well. It has been destroyed several times but has managed to retain its magnificent antique looks. It's located in the old part of the city and is easily accessible.
Image by PORKCHOP RULES on Flickr under Creative Commons License.

The nightlife in Havana is rich and diverse. Clubs and cabarets are an important part of this city. Havana has a lot to offer - from the famous cabaret Tropicana to the simplest but authentic cabarets. Take a sip of rum and enjoy a show, or go to a Western-style bar and dance until dawn. Feel enticed by the rhythms of Rumba and Bolero - these are some of choices available to you here in Havana.

Old Town of Havana is a perfect place to feel the Spirit of Cuba. This part of the city has a unique atmosphere and history. The city was founded by the Spanish in 1519. Thousands of tourists visit it each year. UNESCO proclaimed it a world heritage site. Take this astonishing walking tour in the middle of Old Havana.

Havana has a rich history and was once the Spanish center of power in the Caribbean and South America. Later, it became the center of art, architecture and military power in the region. The museums in Havana can show you much of the city's history.