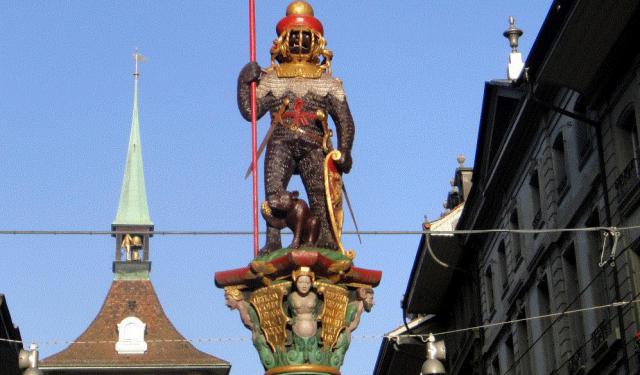 Image by DoJoe on Flickr under Creative Commons License.

Fountain Walking Tour in Bern Part I (Self Guided), Bern

Bern is famous for its 16th-century fountains, many of which include impressive original statues. Today these fountains tell us stories about events and heroes from Bern’s past. Take this tour to explore the historical fountains of Bern.
How it works: Download the app "GPSmyCity: Walks in 1K+ Cities" from iTunes App Store or Google Play to your mobile phone or tablet. The app turns your mobile device into a personal tour guide and its built-in GPS navigation functions guide you from one tour stop to next. The app works offline, so no data plan is needed when traveling abroad.

From east to west, the first fountain you will encounter is the Läuferbrunnen near Nydegg Church on Nydeggstalden. The trough was built in 1824, but the figure dates from 1545. "The Runner" has moved several times since it was first created. Until 1663 it was known as the Brunnen beim unteren Tor, or Fountain by the Lower Gate, because of its location. Originally the Läuferbrunnen had an octagonal trough, which was later replaced with a rectangular trough. The original round column was replaced with the current square limestone pillar in the 18th or 19th century.

Image by Mike Lehmann on Wikimedia under Creative Commons License.
Sight description based on wikipedia
2

In a city of over one hundred fountains, the Gerechtigkeitsbrunnen ("Fountain of Justice") in the Old City of Bern is most definitely one to see. It is the only Bernese fountain to retain all of its original design elements, and it is listed as a cultural heritage site of national significance.

Due to Hans Gieng's famous statue of Lady Justice, the Gerechtigkeitsbrunnen surpasses all other Bernese fountains in artistic merit. The iconic figure was copied throughout Switzerland up until the middle of the 17th century. At the feet of Justice, four smaller busts crowd the pedestal: a Pope, an Emperor, a Sultan and a Schultheiss, whose golden chain of office is believed to have originally borne the Bernese arms. All figures have closed their eyes as in submission. They represent the Four Earthly Powers, the four forms of government according to Renaissance humanism: theocracy (the Pope), monarchy (the Emperor), autocracy (the Sultan) and the republic (the Schultheiss).

The ensemble represents the supremacy of Justice over all Earthly authorities; a variant of the medieval pictorial formula of virtue defeating vice. Divine Justice was a frequent element of political discourse in Reformation-era Bern. In the view of the reformators, doing justice according to God's word was the highest duty of all authority, superseding feudal rights. Such arguments were used, among others, to justify Bern's conquest of Vaud in 1536 from the dukes of Savoy.

While the sword and scales are traditional attributes of Iustitia, the Bernese statue's blindfold is a novelty; only later did it become a common element in personifications of Justice and a general symbol for the principle of equality before the law. The blindfold implies that justice ought to be done without respect to rank or standing; that a just verdict is arrived at through introspection rather than with a view to outward looks. Gieng's Iustitia is a symbol of republican justice and was a forceful public reminder of the Bernese Republic's authority through law.


Image by Benutzer:Nobodystranger on Wikimedia under Creative Commons License.
Sight description based on wikipedia
3

The Vennerbrunnen is located in front of the old City Hall or Rathaus. A Venner was a military-political position in medieval Switzerland responsible for protecting a section of a city and leading troops from that area into battle. In Bern, the Venner was very powerful and important to the operations of the city. Each Venner was part of a guild and chosen from that guild. A Venner was one of only two positions from which the Schultheiß or Lord Mayor was chosen. The statue, built in 1542, shows a Venner in full armor with his banner.

The statue dates from 1544. After storm damage it was rebuilt in 1790-1791. The Louis XVI style basin was designed by Niklaus Sprüngli. The statue represents Moses bringing the Ten Commandments to the Tribes of Israel. The twin rays of light come from a longstanding tradition that Moses instead grew horns.

With apparent Biblical authority, and the added convenience of giving Moses a unique and easily identifiable visual attribute, it remained standard in Western art to depict Moses with small horns until well after the mistranslation was realized in the Renaissance. In this depiction of Moses, the error has been identified but the artist has chosen to place horns of light on Moses head to aid in identification.

The fountain represents the Biblical story of Samson killing a lion. According to the story, Samson was born to a sterile Israelite couple on the conditions that his mother and her child (Samson) abstain from all alcohol and that he never shave or cut his hair. Because of his commitment to live under these conditions, Samson is granted great strength. As a young man he falls in love with a Philistine woman and decides to marry her. At this time, the Philistines ruled over the Israelites and Samson's decision to marry one causes great concern among his family. He calms their concerns and travels to marry his love. On the way he is attacked by the lion and with his incredible strength kills the lion.

The fountain, built in 1544 by Hans Gieng, is modeled after the Simsonbrunnen in Solothurn.

The Zähringerbrunnen fountain is a Swiss Cultural Property of National Significance and is part of the UNESCO World Heritage Site of the Old City of Bern.

The Zähringerbrunnen was probably built in 1535 as a memorial to the founder of Bern, Berchtold von Zähringer. The statue is a bear in full armor, with another bear cub at his feet. The bear represents the bear, that according to legend, Berchtold shot on the Aare peninsula as he was searching for a site to build a city. The armored bear carries a shield and a banner, both emblazoned with the Zähringen lion.

The basin below the fountain bore the date 1542 until 1889 when the entire basin was replaced. At the same time the column and figure were repainted. The old basin was octagonal. On one face it had the inscription Protege Nos Domine and on another Soli Deo Gloria. Another face had the date 1542 in Roman numerals and the fourth had an inscription that was unreadable in the 19th Century. The current basin is an exact replica of the Pfeiferbrunnen's basin.

The Welttelegrafen-Denkmal is a fountain located in front of the Historical Museum in Bern. This fountain was built in 1922 and designed by Giuseppe Romagnoli (b. 1872-d. 1966). At the center of the fountain is a figure of a woman and the words “Human’s souls are concentrated here.”
Image by Aliman5040 on Wikimedia under Creative Commons License.

Bern is famous for its 16th-century fountains, many of which include impressive original statues. Today these fountains tell us stories about events and heroes from Bern’s past. Take this tour to explore the historical fountains of Bern.

Places of Worship Tour of Bern

Bern has an impressive number of worship places that span a range of architectural styles. Take this tour to visit the churches, cathedrals and synagogues where Bern residents go to pray and express their religious beliefs.

When the sun goes down, you can enjoy another side of Bern – its nightlife. Bars and lounges can be found throughout the city, which will keep you entertained with a wide range of cocktails, music and shows. Take this tour to discover Bern's funkiest nightspots and to have an unforgettable night on the town.

Bern has a very interesting and storied history. The city is the cultural center of Switzerland and has a wide range of architectural monuments and buildings to explore. Some of them will impress you with their unusual style, while others will amaze you when you learn how they were constructed. Take this tour to visit Bern's architectural highlights.

Museum and Gallery Tour of Bern

Bern has an amazing array of museums and galleries to visit. Learn about the culture of the Swiss Alps. Check out what's new in contemporary art. View historical photos of Bern. Take this tour to do all this and more as you visit Bern's most famous museums and galleries.

Bern has an amazing range of shops where you can find great gifts and souvenirs. Take this tour to discover Bern's best wine shops, watch stores, bookstores and more.