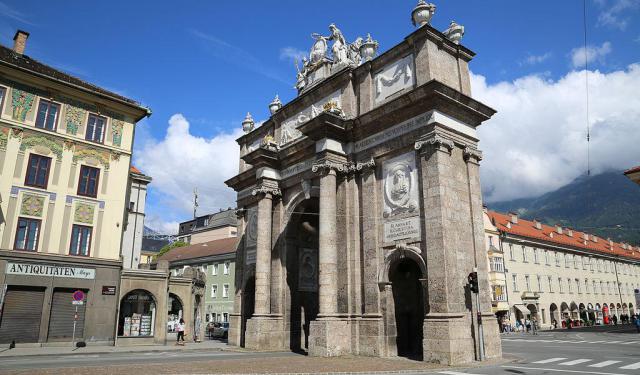 Image by Tobias Klenze on Wikimedia under Creative Commons License.

Innsbruck is famous due to its memorable, largely Gothic styled architecture. The fantastic architecture characterizes the medieval period and includes such elements as pointed arches, flying buttress, and ribbed vaults. The majority of the local buildings are old, some of them even date back to the 12th century.
How it works: Download the app "GPSmyCity: Walks in 1K+ Cities" from iTunes App Store or Google Play to your mobile phone or tablet. The app turns your mobile device into a personal tour guide and its built-in GPS navigation functions guide you from one tour stop to next. The app works offline, so no data plan is needed when traveling abroad.

Triumphpforte, German for "Triumphal Arch," is a very nice construction with an interesting story. It was built to celebrate and commemorate the engagement of the future Emperor Leopold I to Maria Ludovica from Spain. Tragically, during the wedding festivities, Emperor Franz Stephan I died. That's why one side of the Triumphpforte, which faces the southern region of the town, is depicted with joyful figures and the other end with sadness and mourning.
Image by böhringer friedrich on Wikimedia under Creative Commons License.
2

Befreiungsdenkmal is the Liberation Monument and its situated in Eduard-Wallnöfer Square (formerly the Country House Square). The monument was built almost 70 years ago at the initiative of the French occupation forces to those forces who have sacrificed their lives. Befreiungsdenkma was designed by the architect Pascoud and symbolizes the liberty of the Austrian people.
Image by böhringer friedrich on Wikimedia under Creative Commons License.
3

Altes Landhaus is the old federal state parliament house. The former parliament is situated in the historic center of Innsbruck. Altes Landhaus is tagged as one of the most admirable Baroque buildings of the town and all of Tyrol. It's an old edifice, beautifully decorated and embellished with paintings, frescoes, fireplaces, ornate staircases, and statues.
Image by Andrew Bossi on Wikimedia under Creative Commons License.
4

Rathausgalerie is a large shopping center, encased in a glass roof. The shopping center is easily one of the best destinations in town, as it combines the most renowned and acclaimed brand names of high quality. Rathausgalerie is located on the famous Maria Theresien Straße, where other shops, cafés, restaurants, and the Annasäule statue are conveniently situated.
Image by Hustle & Bustle on Flickr under Creative Commons License.
5

Spitalskirche is another old church, located in the center of town. Spitalskirche, or as it's also called Alte Spitalskirche zum Hl. Geist, is a Roman- Catholic Church of the Holy Spirit Hospital. Basilica dates back to the 14th century, where in 1326, the building was transformed into a hospital while also serving as a church.
Image by Andrew Bossi on Wikimedia under Creative Commons License.
6

Stadtturm is the main medieval tower in Innsbruck, as it dates back to 1450. Initially, the tower was used as a prison but has slowly transformed into one of the most attractive civic towers. In the middle of the 16th century it was reconstructed and it can be found in the very heart of Old Town.
Image by Freddy Alexander Bugueño Tolmo on Wikimedia under Creative Commons License.
7

Helblinghaus, also called Casa Helbling, is located at the Herzog Friedrich Straße in Innsbruck. The area is famous for the multitude of Baroque facades situated on it. Most of the terrific facades were built in the 15th and 16th centuries. It is really impressive.
Image by Ikiwaner on Wikimedia under Creative Commons License.
8

Ottoburg is one of the most famous and popular restaurants in town, as well as a historical landmark with its own story. Ottoburg was initially built as a part of the Innsbruck-Castle (11th or 12th century) and consequently many important people have lived here: the two sons of the Empire Maximilian I, Phillip from Spain, and Claudi f. Medici. Ottoburg also offers fabulous views on the river, mountains, and the Golden Dachl.
Image by Mathias Bigge on Wikimedia under Creative Commons License.
9

9) Hofburg - The Imperial Palace (must see)

Hofburg Palace has housed some of the most powerful people in Austrian history, including the Habsburg dynasty, rulers of the Austro-Hungarian empire. It currently serves as the official residence of the President of Austria. It was the Habsburgs' principal winter residence, as the Schönbrunn Palace was their preferred summer residence.

The Hofburg area has been the documented seat of government since 1279 for various empires and republics. The Hofburg has been expanded over the centuries to include: various residences, the chapel, museums, the Imperial Library, the treasury, the national theatre, the riding school, the horse stables and the Hofburg Congress Center. The Hofburg faces the Heldenplatz ordered under the reign of Emperor Francis Joseph, as part of what was to become a Kaiserforum that was never completed.

Image by QEDquid on Wikimedia under Creative Commons License.
Sight description based on wikipedia
10

Kongress - und Konzerthaus is the main building for Innsbruck's Congress, which until 1966, was known under the name of Dogana. The Archduke Ferdinand II first used the venue during the 16th century as a building for balloon games and popular Italian musical comedies. Later, the building transformed into a riding school and had served as a model for the construction of the Spanish Riding School in Vienna.
Image by Hafelekar on Wikimedia under Creative Commons License.
11

Klosterkirche is one of the most beautiful churches in town, wonderfully decorated inside and depicted outside with bright colors. Locals flock to Klosterkirche, seeking peace and time to gather their thoughts as they pray. Make sure you do not miss this once in a lifetime opportunity.
Image by Daderot on Wikimedia under Creative Commons License.