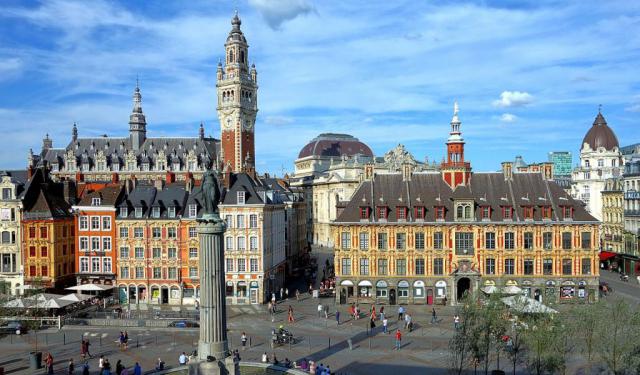 Image by Velvet on Wikimedia under Creative Commons License.

Lille is an adorable French city with a distinct history and culture. The landmarks presented in this tour will certainly catch your eye, enrich your senses and leave you with good memories of the city. Discover Lille’s best attractions in this orientation walk.
How it works: Download the app "GPSmyCity: Walks in 1K+ Cities" from iTunes App Store or Google Play to your mobile phone or tablet. The app turns your mobile device into a personal tour guide and its built-in GPS navigation functions guide you from one tour stop to next. The app works offline, so no data plan is needed when traveling abroad.

The Palais des Beaux-Arts de Lille is one of the largest museums in France. It was one of the first museums, established under the instructions of Napoleon I at the beginning of the 19th century as part of the popularisation of art. The museum opened in 1809 and was initially housed in a church, before being transferred to the city's town hall. In 1866, the "musée Wicar", formed from the collection of Jean-Baptiste Wicar, was merged into the Palais des Beaux-Arts.

Construction of the Palais's current Belle Époque style building began in 1885 and it was completed in 1892. At the start of the 1990s, the building's poor state and the moving of Vauban's relief models of fortified towns to Lille forced the town to renovate the building. Work began in 1991 and was completed in 1997. Overall the museum covers 22000 square meters, the second largest collection in France after the Louvre. Its sculptures, paintings, drawings, ceramics and so on include works by Raphael, Donatello, Van Dyck, Tissot, Jordaens, Rembrandt, Goya, El Greco, David, Corot, Courbet, Toulouse-Lautrec, Delacroix, Rubens, Rodin, Claudel and Jean-Baptiste Chardin.

Image by Velvet on Wikimedia under Creative Commons License.
Sight description based on wikipedia
2

Porte de Paris was built between 1685 and 1692 and was listed as an historic monument in 1865. When Louis XIV captured Lille, he ordered a huge triumphal arch to be built in honor of his victory. This gate was the entrance to Lille for some time. It is decorated with statues of Mars and Hercules, symbols of war and power.
Image by GDC on Wikimedia under Creative Commons License.
3

Designed by architect Emile Dubuisson, this city hall and its belfry were established in 1932. The belfry is 101 meters high and symbolizes Lille’s commitment to peace, faith in good work and the pride of Flanders. It was listed as an historic monument in 2002. The building is a magnificent piece of Art-Deco magic.
Image by Velvet on Wikimedia under Creative Commons License.
4

Construction of the Gothic style Église Saint-Maurice, located in the central part of the city, began at the end of the 14th century. Restoration of this beautiful Roman Catholic church was done by architect Philippe Cannissié in the 19th century. It was made an historic national monument in 1914.
Image by Velvet on Wikimedia under Creative Commons License.
5

The street is an urban public road of the commune of Lille, in the department of the North, in France. An exclusive pedestrian street in the city center, it is the main shopping street of the city.
Image by Velvet on Wikimedia under Creative Commons License.
6

Vieille Bourse was built between 1652 and 1653. The tradesmen and stockbrokers of Lille needed a place to meet, so they convinced the king to open this stock exchange. It has become a famous historic monument and has been renovated numerous times. The emblem of the Bourse is a statue of Mercury, the God of Commerce.
Image by Velvet on Wikimedia under Creative Commons License.
7

7) Column of the Goddess

Column of the Goddess is the popular name given by the citizens of Lille to the Memorial of the Siege of 1792. The memorial sits in the center of the city's main square. The siege of September 1792 was a battle fought during the French Revolutionary War and is considered a major event in the city's history, despite its relatively low military significance on a wider scale. Hyacinthe Jadin composed Marche du Siège de Lille in 1792. Fifty years later, the local authorities decided on the building of a memorial, and began in September 1842. The memorial consists of a column topped by a statue. The column was designed by architect, Charles Benvignat, while the statue was sculpted by Théophile Bra as an allegory of the besieged city wearing a mural crown.
Image by Tom Page on Flickr under Creative Commons License.
Sight description based on wikipedia
8

Place du Général-de-Gaulle, an historical site, is the city’s main square. This large square is surrounded by Flemish style houses, restaurants and cafes. There is the Column of the Goddess and a fountain in the center of the square. It is usually crowded with many people coming to relax, shop and eat.
Image by Marie Lefrançois on Wikimedia under Creative Commons License.
9

Lille Cathedral, or Basilique-cathédrale Notre-Dame-de-la-Treille de Lille, a national monument, has been the seat of the Bishop of Lille since the founding of the diocese in 1913. Its construction began in 1854, taking its name from a 12th century statue of the Virgin Mary.
Image by Christophe.Finot on Wikimedia under Creative Commons License.
Sight description based on wikipedia
10

This museum is located in the former Comtesse Hospital and named after its founder. During the French Revolution it was used as a hospice for the elderly. Georges-Henri Riviere established it as a museum in 1969. Its interior is reminiscent of a 16th century Flemish house, displaying Flemish and northern French paintings, tapestries and local silverware.

Image by Velvet on Wikimedia under Creative Commons License.
11

Église Sainte-Catherine de Lille, a Roman Catholic church dedicated to St. Catherine of Alexandria, was listed as an historical monument in 1991. Construction began in 1485 and was finished in 1727. It features windows designed by Henri Evaldre and wooden furniture from the 19th century.
Image by Velvet on Wikimedia under Creative Commons License.
12

The Citadel of Lille is a pentagon-shaped fortress built into Lille’s city wall around 1668. It houses France’s Corps de Réaction Rapide. Dubbed "Queen of the Citadels" (Reine des Citadelles) by Vauban, it is one of his most notable designs. It was part of a double line of fortified towns, including Gravelines, Dunkirk and Maubeuge-Rocroi, the famous pré carré (square field), conceived by Vauban, comprising 28 fortified cities.
Image by Remi Jouan on Wikimedia under Creative Commons License.
Sight description based on wikipedia