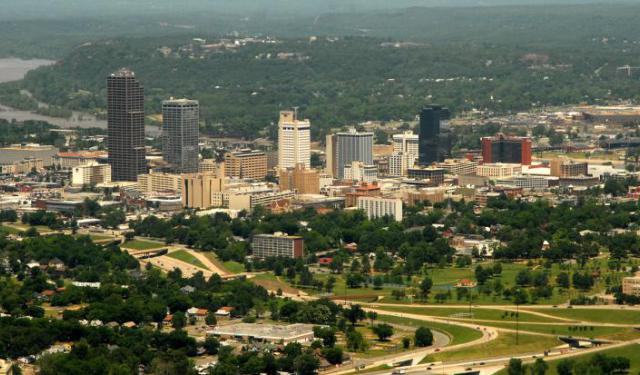 Image by Photolitherland on Wikimedia under Creative Commons License.

There are monumental historical landmarks in Little Rock. The landmarks are mainly located in the downtown area of the city. The most prominent among them are Capitol Building and Old State House Museum. Take this self-guided walk to explore the main landmarks of the city but also the interesting shopping and entertainment sights.
How it works: Download the app "GPSmyCity: Walks in 1K+ Cities" from iTunes App Store or Google Play to your mobile phone or tablet. The app turns your mobile device into a personal tour guide and its built-in GPS navigation functions guide you from one tour stop to next. The app works offline, so no data plan is needed when traveling abroad.

Little Rock City Hall is a majestic building in the center of Little Rock. City Hall was built in 1907. You will see a large staircase leading to the porch; the facade is decorated with several massive columns. The architecture of the building is classic. Now it is registered as a National Historical Site.
Image by Wolfgang Beckers on Wikimedia under Creative Commons License.
2

Robinson Center is the western portion of downtown Little Rock's Statehouse Plaza, including a 2,609-seat performance hall, an exhibition hall, and various meeting rooms. The most notable architectural feature of the complex is the south façade of Joseph Taylor Robinson Municipal Auditorium, adorned with columns that echo the Greek Revival style also found in the centerpiece of the plaza, the Old State House Museum.

Under the name Joseph Taylor Robinson Memorial Auditorium, the music hall was added to the National Register of Historic Places in 2007. It is the primary performance space for the Arkansas Symphony Orchestra, traveling productions of popular Broadway plays and musicals, and various concerts throughout the year.

Image by garlandcannon on Flickr under Creative Commons License.
Sight description based on wikipedia
3

In 1947 the General Assembly approved acts designating the Old State House as a museum. The building underwent major renovation in 1996. It was designated a National Historic Landmark in 1997. The building continues to serve as a museum with exhibits related to Arkansas history and culture. Permanent collections include Civil War battle flags, the inaugural gowns of governors' wives, Arkansas art pottery, and African-American quilts.

Image by Wasted Time R on Wikimedia under Creative Commons License.
Sight description based on wikipedia
4

Historic Arkansas Museum reveals the history of the state in different periods. There are exhibitions where you can see how the first immigrants lived. Arkansas artifacts and contemporary art by Arkansas artists are displayed in the galleries of the museum. There is a children's gallery with interactive activities dedicated to kids. There is a museum shop where you can buy quilts and contemporary crafts. There is a theater at the museum where you can see short videos about Arkansas. The most visited exhibition is the one dedicated to Bowie Knife; there is information about slavery in Arkansas.
Image by Emanuel Leutze on Wikimedia under Creative Commons License.
5

There is a South Korean gate and garden in the center of Little Rock. This monumental gate symbolizes the friendship between these two countries. It was a gift from South Korea that cost 1,4 mil. dollars. H.U. Lee was the person who established the American Taekwondo Association with headquarters in Little Rock. The gate weighs 80 tons. It was created with the hands of South Korean artisans. If you pass through the gate you will find yourself in a garden with a tall fountain and a reflective pool. The garden is decorated with many statues.
Image by Aldo Fonticiella on Flickr under Creative Commons License.
6

Junction Bridge is a pedestrian bridge through the river in Little Rock. The bridge boasts a modern design and connects downtown Little Rock with North Little Rock. It provides panoramic views of the city's banks and the exciting River Market District, as it was built high above the river. There are benches on which to sit along the bridge. The original bridge dates back to 1884, but at that time it carried trains, whereas now it serves only as a pedestrian bridge. There is an elevator that carries people up to the bridge.
Image by cliff1066™ on Flickr under Creative Commons License.
7

Ottenheimer Market Hall is close to the river in the Riverside Market District. It is open year round and is a real bazaar. There are different products there: food, specialty items, coffee and fresh products. You can buy unique specialties such as handcrafted artesian cakes, exceptional homemade pies, meat and locally roasted gourmet coffees. There are also authentic goods pertaining to different nationalities that exist in Little Rock, such as Mexican, Japanese, Eastern and European. There are many places where you can eat at the market hall.
Image by Michael Caven on Wikimedia under Creative Commons License.
9

The William J. Clinton Presidential Center and Park is the presidential library of Bill Clinton, the 42nd President of the United States (1993–2001). It is located in Little Rock, Arkansas and includes the Clinton Presidential Library, the offices of the Clinton Foundation, and the University of Arkansas Clinton School of Public Service. It is the thirteenth presidential library to have been completed in the United States, the eleventh to be operated by the National Archives and Records Administration, and the third to comply with the Presidential Records Act of 1978.

It is situated on 17 acres (69,000 m2) of land located next to the Arkansas River and Interstate 30 and was designed by architectural firm Polshek Partnership, LLP with exhibition design by Ralph Appelbaum Associates. Polk Stanley Wilcox Architects also contributed. The main building cantilevers over the Arkansas River, echoing Clinton's campaign promise of "building a bridge to the 21st century". With a 68,698-square-foot (6,382.3 m2) floor plan, the library itself is the largest presidential library in terms of physical area,[2] although the Ronald Reagan Presidential Library has the greatest space overall, due to its addition of the 90,000 square feet (8,400 m2) Air Force One Pavilion in 2005. The archives are the largest as well, containing 2 million photographs, 80 million pages of documents, 21 million e-mail messages, and 79,000 artifacts from the Clinton presidency. The Clinton Library is also the most expensive, with all funding coming from 112,000 private donations.

The museum showcases artifacts from Clinton's two terms as president and includes full-scale replicas of the Clinton-era Oval Office and Cabinet Room.
Image by Fetchcomms on Wikimedia under Creative Commons License.

Create Your Own Walk in Little Rock

Creating your own self-guided walk in Little Rock is easy and fun. Choose the city attractions that you want to see and a walk route map will be created just for you. You can even set your hotel as the start point of the walk.

Bill Clinton, one of the American presidents, lived in Little Rock. Besides the Capitol and Governor's Mansion, you can see many other places where he spent time while living in this city. These places reveal a lot about the character, hobbies and job of this outstanding person. Take this self-guided tour to explore Clinton's favorite attractions in Little Rock.

There are monumental historical landmarks in Little Rock. The landmarks are mainly located in the downtown area of the city. The most prominent among them are Capitol Building and Historical Little Rock Central High School. Take this self-guided tour to explore the main landmarks of the city.