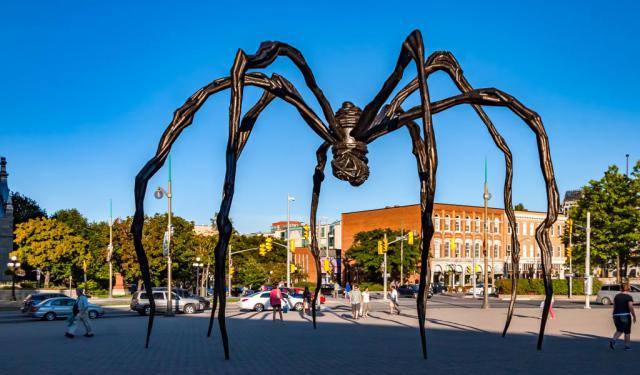 Image by Michel Rathwell on Wikimedia under Creative Commons License.

As a cultural city, Ottawa abounds in monuments and statues of various sorts. They are so many, in fact, that the locals jokingly claim to have got so used to them that they hardly notice them at all. As a guest of the Canadian capital, you may want to embark on a hunt for the soul of Ottawa and hear the stories set in stone and bronze, reflecting the eventful past and colorful present of the city. For that, there's nothing better than to take this self-guided walking tour.
How it works: Download the app "GPSmyCity: Walks in 1K+ Cities" from iTunes App Store or Google Play to your mobile phone or tablet. The app turns your mobile device into a personal tour guide and its built-in GPS navigation functions guide you from one tour stop to next. The app works offline, so no data plan is needed when traveling abroad.

Maman (1999) is a bronze, stainless steel, and marble sculpture by the artist Louise Bourgeois. The sculpture, which depicts a spider, is among the world's largest, measuring over 30 ft high and over 33 ft wide (927 x 891 x 1024 cm). It includes a sac containing 32 marble eggs and its abdomen and thorax are made of ribbed bronze.

The title is the familiar French word for Mother (akin to Mummy). The sculpture was created in 1999 by Bourgeois as a part of her inaugural commission of The Unilever Series (2000), in the Turbine Hall at London's Tate Modern. This original was created in steel, with an edition of six subsequent castings in bronze. Bourgeois chose the Modern Art Foundry to cast the sculpture because of its reputation and work.

The sculpture picks up the theme of the arachnid that Bourgeois had first contemplated in a small ink and charcoal drawing in 1947, continuing with her 1996 sculpture Spider. It alludes to the strength of Bourgeois' mother, with metaphors of spinning, weaving, nurture and protection. Her mother, Josephine, was a woman who repaired tapestries in her father's textile restoration workshop in Paris. When Bourgeois was twenty-one, she lost her mother to an unknown illness. A few days after her mother's passing, in front of her father (who did not seem to take his daughter's despair seriously), Louise threw herself into the Bièvre River; he swam to her rescue.

Image by Roberto on Flickr under Creative Commons License.
Sight description based on wikipedia
2

The Three Watchmen is a 16 foot tall bronze sculpture that is located at the intersection of Murray Street, St. Patrick Street and Mackenzie Avenue. The sculpture, which is one of the many public art installations in the Byward Market neighborhood, is located near the National Gallery of Canada.

The Haida are indigenous to Canada who are notably from the Haida Gwaii off the coast of British Columbia. Haida artist and hereditary Chief of the Staast'as Eagle Clan, James Hart, designed the sculpture in 2003. It was cast in bronze in 2010 and placed in its home that overlooks the National Gallery, the Notre Dame Cathedral Basilica and a number of government buildings.

The sculpture is an example of the artwork of the Haida who use totems to protect their homes. It is meant to represent figures that watch for physical and spiritual threats. Any visitor walking through the area can stop to admire the Three Watchmen. Though it is poised at a busy intersection, there is a walking path that allows visitors to get a much closer view.

Image by Christine Webster on Flickr under Creative Commons License.
3

Reconciliation: The Peacekeeping Monument is a monument in Ottawa commemorating Canada's role in international peacekeeping and the soldiers who have participated and are currently participating, both living and dead.

It is located in the centre of a major intersection just south of the National Gallery of Canada and just north of the American Embassy and Major's Hill Park. Artist Jack Harman built the three soldiers with architects Richard and Gregory Henriquez designing the site concept and monument structures. Cornelia Oberlander was the landscape architect. The monument was completed in 1992.

The work, entitled Reconciliation, depicts three peacekeeping soldiers — two men and a woman — standing on two ridges of stone which cut through the broken debris of war and converge at a high point, which symbolizes the resolution which peacekeeping brings. The base of the monument includes Lester Pearson's 1956 quote "We need action not only to end the fighting but to make the peace... My own government would be glad to recommend Canadian participation in such a United Nations force, a truly international peace and police force", as well as the French translation.
Image by Michel Rathwell on Wikimedia under Creative Commons License.
Sight description based on wikipedia
4

Dancing bear is a sculpture by Saila in Ottawa's Byward Market. Pauta Saila (1916 or 1917–2009) was an Inuit artist from Kilaparutua, Baffin Island, Canada who resided in Cape Dorset, Nunavut. His works are massive, simplified sculptures of Arctic wildlife, usually in soapstone; best known are his dancing bears. He was elected to the Royal Canadian Academy of Arts in 2003.

This Dancing Bear sculpture is an Ottawa favourite and is located in the ByWard Market’s Jeanne d’Arc courtyard. Installed in 1999, the Dancing Bear is the first public art to be displayed in Ottawa from a Nunavut-based artist. ***PH***
Image by Ian Mackenzie on Wikimedia under Creative Commons License.
Sight description based on wikipedia
5

The monument was installed around the Sappers Staircase, an underpass on the northeastern corner of Confederation Square, adjacent to the National War Memorial. The wall of the staircase is decorated with a quotation from the Aeneid by Virgil:

"Nulla dies umquam memori vos eximet aevo"
which translates to "No day will ever erase you from the memory of time".
Image by Bonnie Dean on Flickr under Creative Commons License.
Sight description based on wikipedia
6

The National War Memorial is a tall, granite memorial arch with accreted bronze sculptures in Ottawa. It was first dedicated by King George VI in 1939. Originally built to commemorate the Canadians who died in the First World War, it has since been dedicated to also include those killed in all conflicts past and future. In 2000, the Tomb of the Unknown Soldier was added in front of the memorial and symbolizes the sacrifices made by all Canadians who have died or may yet die for their country.

The National War Memorial is the focal point of Confederation Square in Canada's capital city. The square is located between several major buildings and features, with Parliament Hill to the northwest, the Rideau Canal to the northeast, and the National Arts Centre to the east. A number of buildings is situated west of the square, including the Bell Block, the Central Chambers building, the Office of the Prime Minister and Privy Council, and the Scottish Ontario Chambers building.

Whenever the monarch or another member of the Royal Family is in Ottawa, they will, regardless of the date, lay a wreath at the monument. Visiting foreign dignitaries will also sometimes lay a wreath at the monument; prominent figures who have done so include US President John F. Kennedy in 1961, Soviet Union leader Mikhail Gorbachev in 1990, US Secretary of State John Kerry, and French President François Hollande in 2014.
Image by Pascal Walschots on Wikimedia under Creative Commons License.
Sight description based on wikipedia
7

The War of 1812 Monument, officially titled Triumph Through Diversity (Triomphe grâce à la diversité in French), is a bronze and stone memorial, located at Parliament Hill in Ottawa. Seven figures—a First Nations fighter, a Métis militiaman, a regular infantryman from the Royal Newfoundland Regiment of Fencible Infantry, a Quebec soldier of the Canadian Voltigeurs being bandaged by a female figure, a Royal Navy marine, and a farmer—represent those who took part on the Canadian side of the War of 1812. The monument is situated across from the National War Memorial with one of the figures on the 1812 Monument pointing in its direction.

Also part of the monument is a maple tree planted in soil taken from 10 Canadian battlefield sites and watered at the dedication with water from six oceans and lakes significant in the War of 1812. The tree symbolizes the Canadian nation that grew out of the effort to defend Canada during the War of 1812.

The Monument was dedicated on 6 November 2014, the 200th anniversary of the war's final battle in Canada, the Battle of Malcolm's Mills.
Image by Jeangagnon on Wikimedia under Creative Commons License.
Sight description based on wikipedia

The name Ottawa comes from the Algonquin word for trade. It is an appropriate name for the Ottawa River, which was once the primary trade route for Eastern Canada. The capital of Canada gets its name from this river due to its location. Resting on the banks of the Ottawa River, Ottawa is a political and cultural city that also offers outdoor activities and beautiful natural sights.

Ottawa is home to a large number of excellent galleries that offer something to all art lovers. Be it a small family-owned gallery or a large national institution, each of them is illustrative of the Canadian art and its evolution. Presented here is a list of best art galleries in downtown Ottawa for your enjoyment. Take this self-guided walking tour to explore and discover the art pieces that the...  view more

The architecture of Ottawa – formalistic and functional, for the most part – is marked by the city's role as the national capital of Canada. It represents a mix of different styles, varying considerably based on the era of construction of any particular object. Here, amid the monumental structures designed to represent the federal authority, there is an array of buildings featuring...  view more

Ottawa, the northern capital of Canada, is famous not only for its art galleries and museums, but also for its dark past. There are several buildings in this city that the locals prefer to walk around. These buildings, it is said, are inhabited by real, horrifying ghosts. Dare you take this walking tour through Ottawa’s haunted places when the darkness falls.