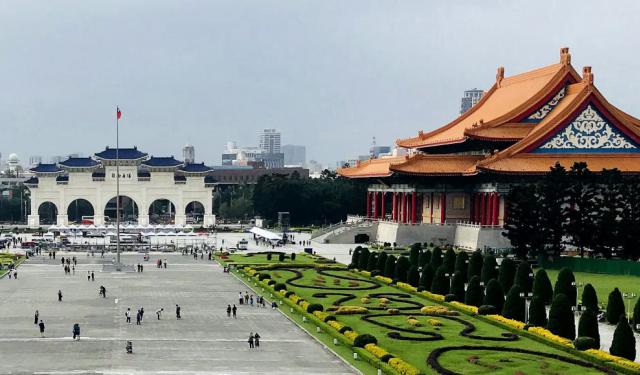 Image by trcheng on Wikimedia under Creative Commons License.

Taipei City greets visitors with a great variety of tourist attractions. Being the commercial and cultural heart of Taiwan, it has a tons of sites with international significance. The following tour will take you to some of most important and well-known destinations in Taipei.
How it works: Download the app "GPSmyCity: Walks in 1K+ Cities" from iTunes App Store or Google Play to your mobile phone or tablet. The app turns your mobile device into a personal tour guide and its built-in GPS navigation functions guide you from one tour stop to next. The app works offline, so no data plan is needed when traveling abroad.

Shin Kong Life Tower, constructed in 1993, consists of 51 floors and has a total height of 245 m, making it one of the highest buildings in Taiwan. The first twelve floors house a department store, with the higher levels housing various business offices. There is also an amazing observatory on the 46th floor. The Shin Kong Life Tower perfectly combines the functions of mega-store, office building and public area.
Image by Alton.arts (Alton Thompson) on Wikimedia under Creative Commons License.
Sight description based on wikipedia
2

Established in 1908 by the colonial government during Taiwan's period of Japanese rule, the National Taiwan Museum is the oldest museum in Taiwan. It has witnessed Taiwan's history and recorded its natural and humanitarian developments. Through this window, one may catch a glimpse of Taiwan's evolution with regard to the fields of earth sciences, humanitarian developments, zoology, and botany. The building represents both Renaissance and Baroque styles and received the title of National Historical Monument in 1998.

Tip:
Tickets allow access to two locations. The Land Bank Exhibition Hall across the street is more interesting for kids as it has models of dinosaurs and other animals. It was also a former bank with a vault that you can visit to learn about the history of banking in Taiwan.
Allow at least an hour for both locations. Remember to also visit the Peace Park behind the museum, and check out the dumpling and Chinese pastry eateries across the road from the west entrance of the park.


Image by Scchiang on Wikimedia under Creative Commons License.
Sight description based on wikipedia
3

228 Peace Memorial Park was the first European-style urban park in Taiwan, placed on the grounds of the Colonial Governor's Office (today's Presidential Office Building). Its name comes from the day (February 28, 1947) the historic White Terror period of Taiwan began. Thousands of Taiwanese were killed or imprisoned during an anti-government uprising that began when protesters took over the radio station that was established in this park. The park occupies 71,520 sq m and houses Taipei 228 Memorial Museum and a number of memorials to victims of those events. The park also has a bandshell and exercise areas.

Why You Should Visit:
One of Taipei's favorite parks and a respite from the busy city roads – from the gorgeous lake pagoda to the Reiki stone area. Truly peaceful.

Tip:
Buy takeaway meals/drinks from nearby shops and go for a quiet picnic. Bring nuts also (ONLY plain nuts or dried fruits!) as squirrels will actually eat them from your hands! Public toilets available.
Be sure to try and 'walk the stones' to the bell at one end of the park – it hits all the pressure points on your feet (if walking barefoot or in your socks) but a good little cultural experience to share with your friends!

The Presidential Office Building is the highest authority building in Taiwan. It has four ground floors, one underground floor, and a whopping ten entrances. The total number of rooms in the building is about 300, most of which are used as business offices. A section of the building is opened to the public on weekdays during specific daytime hours.

Designed by architect Uheiji Nagano during the period of Japanese rule of Taiwan (1895–1945), the structure was damaged in Allied bombing during World War II and was restored after the war by Chen Yi, the Governor-General of Taiwan Province. It became the Presidential Office in 1950 after the Republic of China lost control of mainland China and relocated the nation's capital to Taipei at the end of the Chinese Civil War. At present, this Baroque-style building is a symbol of the ROC Government and a famous historical landmark in downtown Taipei.

Tip:
To take a free tour (circa 60-90 mins), go around to the side entrance and line up to go through security check first (passport/bags).
Once inside, be sure to ask politely if you are allowed taking photos in some areas (video strictly forbidden anywhere).
At the end, there's a nice small gift shop full of souvenirs and a spot where you can buy specialty stamps.

Opening Hours:
Mon-Fri: 9–11:30am
Image by Kamakura on Wikimedia under Creative Commons License.
Sight description based on wikipedia
5

The National Theater and National Concert Hall are twin performing arts venues at Liberty Square in Zhongzheng District, Taipei, Taiwan. Completed in 1987, the landmarks stand on the south and north sides of the square with Chiang Kai-shek Memorial Hall to the east. These twin buildings harmoniously combine elements of traditional Chinese architecture with modern trends. The square itself sits near Ketagalan Boulevard, site of the Presidential Office Building, the National Central Library, the National Taiwan Museum, and the 228 Peace Memorial Park.

The National Theater & Concert Hall host a constant stream of events by local and international artists each year. Artistic styles and traditions from across the world are represented in the halls' events, including kabuki theater, Shakespearean drama, Taiwan opera and puppet drama, Verdi opera, African dance, Beijing opera, Broadway shows, Wagnerian music drama, American jazz, Parisian comic opera, and Latin dance. Both venues are the site of a variety of festivals and special events, including the Taipei International Arts Festival, a series of International Arts Festivals ("Call Out in Ecstacy", "Poetic Essays with Lively Meanings"), the British Theatre Festival, the Chinese Drama Festival, or the Taipei Film Festival.

Why You Should Visit:
Attending a concert here is very worthwhile as the acoustics are very good. It's a large, elegant and modern amphitheater built in the classic Chinese style.
You get a sense that this is a place of great national pride for the Taiwanese. When you come here, you get a glimpse of Taipei high society.
Even if you're not going to a festival or concert, it's worth dropping by to see up close along with the Chiang Kai-shek Memorial Hall.
Image by Peter Bronski on Wikimedia under Creative Commons License.
Sight description based on wikipedia
6

The Chiang Kai-shek Memorial Hall is a famous national monument, landmark and tourist attraction erected in memory of Generalissimo Chiang Kai-shek, former President of the Republic of China. Surrounded by a park, it stands at the east end of Taipei's Liberty Square and is flanked on the north and south by the National Theater and National Concert Hall.

The Memorial Hall is white with four sides. The roof is blue and octagonal, a shape that picks up the symbolism of the number eight, a number traditionally associated in Asia with abundance and good fortune. Two sets of white stairs, each with 89 steps to represent Chiang's age at the time of his death, lead to the main entrance. The ground level of the memorial houses a library and a museum documenting Chiang Kai-shek's life and career, with exhibits detailing Taiwan's history and development. The upper level contains the main hall, in which a large statue of Chiang Kai-shek is located, and where a guard mounting ceremony takes place at regular intervals.

Why You Should Visit:
The architecture is incredibly unique and views of the square are excellent from top of the Hall's stairs.
The Hall is also flanked by the National Theater & Concert Hall, which are good places to stop for lunch, tea, or gift shopping.

Tip:
The Military Honor Guard changes every hour, on the hour, from 9am to 5pm. Get there 10-15 mins early – it often draws a big crowd. Afterward, you may browse the garden downstairs or museum with its multiple exhibits.
Key tip for best viewing of the changing of the guard ceremony: If facing the statue, stand on the very right side closest to the elevator entrance. There you will see – and be able to take photos of – the new guards coming out, the entire ceremony unobstructed, and then the old guards exiting.

Visitors of all ages will enjoy visiting this soothing piece of nature in the center of the busy city. Among the attractions the park offers are a golf course, tennis courts, and a swimming pool. The beautiful, natural elements of the park attract local painters and photographers who want to capture its beauty in their work.
Image by luthor522 on Flickr under Creative Commons License.