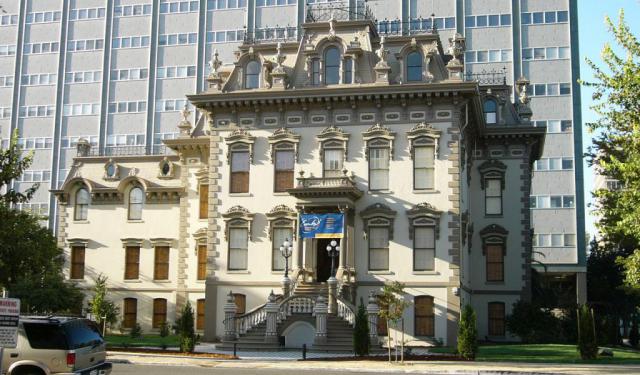 Image by Griffin5 on Wikimedia under Creative Commons License.

Sacramento is a city where it is easy to find distinctive architectural buildings. This self-guided city tour will help you discover some of the most valued works of art in town and admire the individuality of their style. Take this tour and you will be captivated by Sacramento's most interesting architectural constructions.
How it works: Download the app "GPSmyCity: Walks in 1K+ Cities" from iTunes App Store or Google Play to your mobile phone or tablet. The app turns your mobile device into a personal tour guide and its built-in GPS navigation functions guide you from one tour stop to next. The app works offline, so no data plan is needed when traveling abroad.

Governor's Mansion State Historic Park is the location of the historic Governor's Mansion of California, the former official home of the Governor of California. The mansion is listed on the National Register of Historic Places. It is the only governor's mansion in the United States not currently being used by a sitting Governor. The thirty-room, Second Empire, Italianate Victorian mansion was built in 1877 for local hardware merchant Albert Gallatin. The State of California purchased the house in 1903 to serve as a governor's mansion. Many furnishings remain from former governors, including Pardee's 1902 Steinway piano, velvet chairs and sofas belonging to Governor Hiram Johnson, as well as Persian rugs bought by Mrs. Earl Warren. The structure has been renovated a number of times and just recently underwent exterior work to restore the mansion's fading paint as well as replace the aging windows with more efficient, modern ones.
Image by Daderot on Wikimedia under Creative Commons License.
Sight description based on wikipedia
2

The Wells Fargo Pavilion is a theatre venue, located in Sacramento and owned by California Musical Theatre & Sacramento Theatre Company. The site is built on top of the original concrete foundations from the Music Circus tent. Music Circus was a theatre form begun in Lambertville, N.J., by St. John Terrell in 1949. Established as summer stock, the new theatre venues primarily housed light operas and operettas, produced in the round, under a circus-style big top. The original architect is R.F. McCann & Co. Construction for the new pavilion that was conceived in the early 2000's and opened to the public in the Summer of 2003. The structure consists of hard-sided walls with a soft covering, copying its silhouette from the old circus tent. The tent is a permanent structure covered with Teflon-coated fiberglass fabric without tent poles, which had previously obstructed the views of the stage.
Image by Amadscientist on Wikimedia under Creative Commons License.
Sight description based on wikipedia
3

The Sacramento Masonic Temple was established between 1913 and 1918. It was considered a national historic place in 2001 because it is an exceptional building which represents an original design of its time. The magnificent rooms, oak doors, stained glass windows and cast bronze rails highlight the medieval style of the construction.
Image by Publichall on Wikimedia under Creative Commons License.
4

4) Cathedral of the Blessed Sacrament (must see)

Cathedral of the Blessed Sacrament in Sacramento is a cathedral of the Roman Catholic Church in the United States. It is the mother church and seat of Jaime Soto, the ordinary bishop of the Diocese of Sacramento. The Cathedral is located downtown at the intersection of 11th and K Streets. Currently, the cathedral is considered both a religious and civic landmark. It is the mother church of the diocese, which stretches from the southern edge of Sacramento County north to the Oregon border and serves approximately 975,000 Catholics. The diocese encompasses 99 churches in a 42,000 square mile region. The Cathedral of the Blessed Sacrament is one of the largest cathedrals west of the Mississippi River.

With construction beginning in 1887, Sacramento’s Cathedral of the Blessed Sacrament is an example of the strength and history in Sacramento’s architecture. The Cathedral of the Blessed Sacrament combines Sacramento’s history with its modern day life.In 1886, Patrick Manogue was appointed as Sacramento’s first bishop. Inspired by churches he’d seen in European plazas, Manogue modeled the cathedral after L'Eglise de la Sainte-Trinitein Paris. Once completed, there was no cathedral equal in size west of the Mississippi River. The building is a modified basilica form approximately 200 feet long and 100 feet wide, and it seats 1400 people. The central bell tower rises 215 feet.

The architectural style of the church is Italian Renaissance on the exterior and Victorian on the interior. The church has been updated for modern use, but designers tried to keep the church in the original style. Over the years, with repairs, changes in color schemes and changes to the liturgy, the Church lost its stylistic unity.

Image by TravelingOtter on Flickr under Creative Commons License.
Sight description based on wikipedia
5

The California State Capitol is home to the government of California. The building houses the bicameral state legislature and the office of the governor. Located in Sacramento, the Neoclassical structure was completed between 1861 and 1874 at the west end of Capitol Park.

The building is based on the U.S. Capitol building in Washington D.C. The west facade ends in projecting bays, and a portico projects from the center of the building. At the base of the portico, seven granite archways brace and support the porch above. Eight fluted Corinthian columns line the portico. A cornice supports the pediment above depicting Minerva surrounded by Education, Justice, and Mining. The dome is 64 m high, matching that of the U.S. Capitol, and supports a lantern with a smaller dome capped with a gold-leafed orbed finial.
The California Senate chamber seats its forty members in a large chamber room decorated in red, which is a reference to the British House of Lords, also the upper house of a bicameral legislature. The chamber is entered through a second floor corridor
Opening hours: Weekdays 8 am - 5 pm; Weekends 9 am - 5 pm;
Image by Coolcaesar on Wikimedia under Creative Commons License.
Sight description based on wikipedia
6

The U.S. Bank Tower (also called 621 Capitol Mall) is a 25-storey, 402 foot (123 m) tall building in Sacramento. The office tower is located at 621 Capitol Mall and was completed in early 2008. The U.S. Bank bought the naming rights and 34,000 square feet (3,100 square meters) of office space. The building's architect is Hellmuth, Obata + Kassabaum, Inc. (HOK) and the general contractor is Hensel Phelps Construction Co. The building has a series of LED screens atop the building that seem to form a flowing river or waterway at night.
Image by Griffin5 on Wikimedia under Creative Commons License.
Sight description based on wikipedia
7

7) Bank of the West Tower

The Bank of the West Tower, also known as 500 Capitol Mall, is a 25-storey, 433,508-square-foot (40,274.2 m2) high-rise in downtown Sacramento, with a 10-level, 800-stall parking garage. The building consists of a 5-storey atrium/lobby, ground floor retail, office space, and a 2-level penthouse restaurant or meeting facility. The structure has a steel frame and features a granite curtain wall with stone-on-precast and stone-on-truss panels on the exterior. The building opened for business and welcomed its first tenant on May 26, 2009.
Image by Griffin5 on Wikimedia under Creative Commons License.
Sight description based on wikipedia
8

Wells Fargo Center is a 129 m (423 ft) office building in downtown Sacramento. Construction on the skyscraper began in 1990 and was completed in 1992. Standing as the tallest building in the city, it occupies a 2.3 acre city block and features a five-storey granite and marble-walled interior within a clear glass atrium. The project was developed by Hellmuth, Obata and Kassabaum. A museum dedicated to the history of The Wells Fargo Bank in the Sacramento area is located in the ground floor lobby.
Image by Griffin5 on Wikimedia under Creative Commons License.
Sight description based on wikipedia
9

The Tower Bridge is a vertical lift bridge crossing the Sacramento River, linking West Sacramento in Yolo County to the west, with the capital of California, Sacramento, in Sacramento County to the east. It connects West Capitol Avenue and Tower Bridge Gateway in West Sacramento with the Capitol Mall in Sacramento. In 1911, construction was completed on the M Street Bridge in Sacramento. In 1933, the city realized that it needed a better crossing over the Sacramento River in case of war, and that the existing bridge was highly inadequate to handle heavy traffic. It was to be 52 feet (16 m) wide, with four lanes for cars and one large center lane for trains. The towers are 160 feet (49 m) tall. The bridge style represents a rare use of Streamline Moderne architectural styling in a lift bridge, making it an outstanding expression of the social and architectural climate of the period of construction.
Image by Michael Grindstaff on Wikimedia under Creative Commons License.
Sight description based on wikipedia