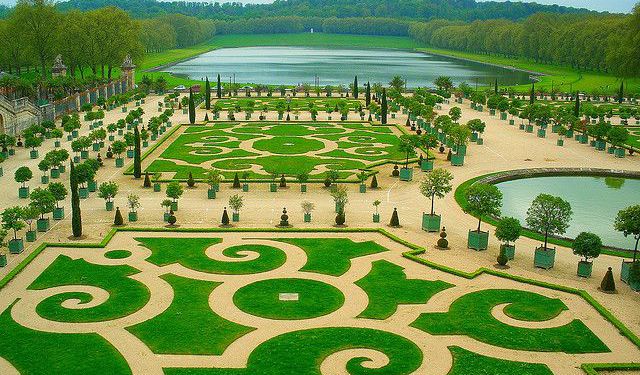 Image by U-g-g-B-o-y-(-Photograph-World-Sens e-) on Flickr under Creative Commons License.

Spread across a vast area of 800 hectares, the Royal Palace of Versailles Gardens are the quintessential example of classic French landscape gardening. Most of the individual feature areas – known as bosquets – in the garden were created by King Louis XIV’s chief gardener, landscape architect André Le Nôtre. These numerous groves are certain to impress you with their magnificence and splendor. Take our tour to find all the highlights of the palace gardens.
How it works: Download the app "GPSmyCity: Walks in 1K+ Cities" from iTunes App Store or Google Play to your mobile phone or tablet. The app turns your mobile device into a personal tour guide and its built-in GPS navigation functions guide you from one tour stop to next. The app works offline, so no data plan is needed when traveling abroad.

Originally, this area of the gardens was planned in 1672 as simple round expanse with a square fountain in the center. In 1676, this bosquet was enlarged and redecorated following French military victories over Spain and Austria. A triumphal arch was added, hence the name. It remained in this form until it was replanted in 1830, when the fountain was removed.
Image by Jérémy Flavien on Wikimedia under Creative Commons License.
Sight description based on wikipedia
2

Situated to the west of the Allée des Marmousets and replacing another short-lived water feature called the Berceau d’Eau, this enlarged area was transformed by Le Nôtre in 1677 into a series of three linked rooms. Each room contained a number of fountains that played with special effects. The fountains survived the modifications that Louis XIV ordered for other fountains in the gardens in the early 18th century, and were subsequently spared during the 1774-1775 replantation of the gardens. In 1830, this bosquet was replanted at which time the fountains were removed. It has had to be restored twice in recent years after storm damage.
Image by koakoo on Wikimedia under Creative Commons License.
Sight description based on wikipedia
3

The central feature of this bosquet’s original design by Le Nôtre was an auditorium sided with turf seating that faced a stage decorated with four fountains. Between 1680 and Louis XIV’s death in 1715, there was a near-constant rearranging of the statues that decorated the bosquet. In 1709, the bosquet was rearranged with the addition of the Fontaine de l’Île aux Enfants. As part of the replantation of the gardens ordered by Louis XVI during the winter of 1774-1775, the Bosquet du Théâtre d’Eau was destroyed and replaced with the simpler Bosquet du Rond-Vert you can see today.
Image by Simdaperce on Wikimedia under Creative Commons License.
Sight description based on wikipedia
4

Created in 1670, this area of the garden has changed a number of times. It originally contained a rectangular pool surrounded by a turf border. Edging the pool were metal reeds and swan figures that each concealed numerous water jets. The center of the pool featured an iron tree that sprouted water from its branches, giving the area is name of the Bosquet du Chêne Vert. In 1705, it was destroyed and replaced by the Bosquet des Bains d’Apollon, which featured statues moved from the Grotte de Thétys. During the reign of Louis XVI, Hubert Robert remodeled the bosquet, creating a cave-like setting for the Marsy statues. The bosquet was then renamed the Grotte des Bains d’Apollon.
Image by koakoo on Wikimedia under Creative Commons License.
Sight description based on wikipedia
5

The current layout of this bosquet dates from 1704. However it is a complete remodeling of an earlier feature designed by André Le Nôtre in 1661. This original design had a five-sided central area bordered by a path. Ten years later, it was enlarged to include several paths leading to a new central water feature, a fountain that resembled a mountain.
Image by Michael Plasmeier on Wikimedia under Creative Commons License.
Sight description based on wikipedia
6

This area of the gardens features two domed pavilions which give this bosquet its name. However the original was quite different. Built in 1675, the Bosquet de la Renommée featured a fountain statue of Fame. With the relocation of the statues from the Grotte de Thétys in 1684, the bosquet was remodeled to accommodate these statues, and the Fame fountain was removed. At this time the bosquet was rechristened the Bosquet des Bains d’Apollon. As part of the reorganization of the garden that was ordered by Louis XIV in the early part of the 18th Century, the Apollo grouping was moved once again to the site of the Bosquet du Marais – located near the Latona Fountain – which was later destroyed and replaced by the new Bosquet des Bains d’Apollon. The statues were installed on marble plinths from which water issued; and each statue grouping was protected by an intricately carved and gilded canopy.
Image by Jérémy Flavien on Wikimedia under Creative Commons License.
Sight description based on wikipedia
7

Like many areas of the garden, this section has seen a number of revisions. Designed as a simple green area by Le Nôtre in 1678, the landscape architect used an existing stream to create a bosquet that featured rivulets that twisted among nine islets. In 1684, Jules Hardouin-Mansart completely redesigned the bosquet by constructing a circular arched double colonnade. The Colonnade, as the area was renamed, had 32 arches and 31fountains. In 1704, three additional entrances were added and three fountains were taken out. The statue that currently occupies the center of the Colonnade – the Abduction of Persephone – was set in place in 1696.
Image by Urban on Wikimedia under Creative Commons License.
Sight description based on wikipedia
8

This area’s present design, which was ordered by Louis XVIII in 1817, aims to resemble an English-style garden. Before that, the bosquet had been two separate water features. One was called the Île du roi and had an island set inside an elaborate set of fountains. The other, the Miroir d’Eau, was separate from the island by a causeway with 24 water jets. Many of these aspects were removed in multiple revisions that followed in the decades after the area’s creation in 1671.
Image by flavouz on Flickr under Creative Commons License.
Sight description based on wikipedia
9

A “quinconce” is a quincunx and, for those of us who were never top of the class in Latin, it is a geometric pattern, elaborated by Pythagoras, consisting of four objects arranged in a square or a rectangle with a 5th object in the centre (like the five dots on a playing dice or domino).

During a replanting program in 1775 both bosquets were destroyed and lime trees were planted in their place. It was at this time they were named the Quinconce du Nord (the Bosquet du Dauphin) and Midi (the Bosquet de la Girandole).

After the Great Storm of 1999, when a large part of Versailles was devastated by the wind, an extensive reforestation program was launched and during this the lime trees were cut down and the two bosquets were restored to their original state and reclaimed their original names.


Image by Thesupermat on Wikimedia under Creative Commons License.
10

This part of the garden has a long and complex history. In 1665, André Le Nôtre planned a maze of unadorned paths in an area south of the Latona Fountain near the Orangerie. In 1669, writer Charles Perrault advised Louis XIV to remodel the Labyrinth in such a way as to serve the Dauphin’s education. Between 1672 and 1677 Le Nôtre redesigned the area to incorporate 39 fountains that depicted stories from Aesop’s Fables, with story plaques that helped Louis XIV’s son learn to read. By the time it was finished the Labyrinth had 333 painted metal animal sculptures. This lasted about a century until, citing repair and maintenance costs, Louis XVI ordered the Labyrinth destroyed in 1778. In its place, an arboretum of exotic trees was planted as an English-styled garden. Rechristened the Bosquet de la Reine, it was in this part of the garden that the famous episode known as the Affair of the Diamond Necklace transpired in 1785.
Image by DaffyDuke on Flickr under Creative Commons License.
Sight description based on wikipedia
11

Located west of the Parterre du Midi and south of the Latona Fountain, this bosquet was designed by Le Nôtre and built in the early 1680s. It features a semi-circular cascade that forms the backdrop for this green area. Interspersed with gilded torch lamps, the Salle de Bal was inaugurated in 1683 by Louis XIV’s son, the Grand Dauphin, with a dance party. Remodeled in 1707, the central island has since been removed and an extra entrance added.
Image by Jean-Christophe BENOIST on Wikimedia under Creative Commons License.
Sight description based on wikipedia