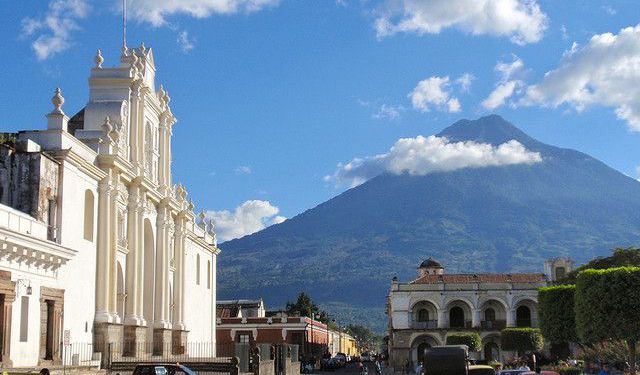 Image by John_Pavelka on Flickr under Creative Commons License.

Surrounded by volcanoes, the city of Antigua is a small yet very picturesque example of Spanish colonial architecture. Full of historic and religious sights, its most notable landmark is arguably the baroque-style La Merced Church which, once a year, becomes a pilgrimage destination for the famous Holy Week tradition or 'Semana Santa'. Follow this self-guided walking tour to explore this and other popular attractions of Antigua.
How it works: Download the app "GPSmyCity: Walks in 1K+ Cities" from iTunes App Store or Google Play to your mobile phone or tablet. The app turns your mobile device into a personal tour guide and its built-in GPS navigation functions guide you from one tour stop to next. The app works offline, so no data plan is needed when traveling abroad.

1) Arch of Santa Catalina (must see)

However there was a dilemma. The cloistered nons had to avoid all contact with the outside world so they could not simply walk across a busy street to reach the school. To solve the problem, an arch above the street was built to connect the convent and the school. Within the arch there is a hidden passageway enabling the nuns to cross the street without being seen in public. It was an ingenious idea that worked perfectly! The arch has suffered damage over the years, especially during the catastrophic earthquake of 1773. But miraculously, it has survived and it is now a symbol of the city’s resilience.

A clock on top was added in the era of the Central American Federation in the 1830s and it needs to be wound every three days.

Today, the Santa Catalina Arch is the most famous city monument and easily the most photographed.

Image by chensiyuan on Wikimedia under Creative Commons License.
2

La Merced Church is a fine example of baroque in Antigua. This storied place of worship was built on the site of a monastery established in 1548, but the original building was repeatedly damaged by earthquakes. The current church was built in 1767. The building has a low height designed to withstand the frequent tremors in Guatemala. The baroque style building has a beautiful facade with ornamental elements set in relief and a striking yellow color of the main walls complemented by white plaster scultures.

After more than three centuries, the building is still standing and remains in good share. Today the church is popular with locals and tourists alike. La Merced Church is open to the public daily from 9 am to 6 pm.
Image by MrPanyGoff on Wikimedia under Creative Commons License.
Sight description based on wikipedia
3

Situated in the heart of Antigua, Parque Central is the center of social life for the city's residents. Surrounded by beautiful colonial structures, this large plaza is the gathering place and a meeting spot for locals and visitors alike. It is a great place to go for a leisurely stroll and people watching. There are plenty of benches and trees if you want a rest and observe as there is always something going on.

At the center of the square is a lovely fountain dating to 1936, a re-creation of an earlier version from 1738 destroyed by earthquakes. Around the plaza, you will find several historical buildings such as Cathedral of Saint Joseph and colonial government buildings. There are also museums, a commercial arcade known as the Portal del Comercio, souvenir shops, as well as restaurants and cafes.
Image by Hans Birger Nilsen on Flickr under Creative Commons License.
4

Antigua Guatemala Cathedral (Spanish: Cathedral de San José) is a Roman Catholic church in Antigua Guatemala, Guatemala. The original church was built around 1541, but suffered several earthquakes throughout its history, and the first church building was demolished in 1669. The cathedral was rebuilt and consecrated in 1680. By 1743 the cathedral was one of the largest in Central America. However, the devastating 1773 Guatemala earthquake seriously damaged much of the building, though the two towers at the front remained largely intact. The cathedral has been partly rebuilt since the early earthquake.
Image by Raymond Ostertag on Wikimedia under Creative Commons License.
Sight description based on wikipedia
5

The convent and church, founded in 1699 by nuns from Puebla in Mexico, became a popular place for well-to-do young ladies to take the veil, as the hardships were none too hard, and the nuns quickly earned a reputation by selling bread to high society. The original convent was totally wiped out in 1717, as was the second in 1773, but the current building was spared in 1976 and its amazingly beautiful ornate facade remains intact.

You walk into a smaller garden, wonderfully kept with beautiful plants and flowers, and can have a good look at the place where they had the bread oven originally, walk past the embedded pila (wash house) to the amazing courtyard with its fountain in the middle, then continue to the church with its underground tombs.

Buy a drink, take a picnic, relax and enjoy the beautiful settings inside this convent. The arches, openings, fountain, layers of exposed walls, and volcano in the background are beautiful to photograph.

Tickets cost Q40 for non-nationals and are good value. A tour of the site takes about an hour.
Image by Renato Caniatti on Wikimedia under Creative Commons License.
6

San Francsico el Grande is a church in Antigua and one of the most frequented sanctuaries by the local population because of the shrine of Peter of Saint Joseph Betancur.

This chapel was severely damaged in 1565 and during the next ten years donations were collected to build a new sanctuary located two blocks away in 1579. The chapel and cloister were expanded during the 17th century. In 1684 the structure was reinforced and withstood the earthquake of 1691.

The church itself was built by Diego de Porres and inaugurated in 1702. Its facade, with twisted salomonic columns, is typical of the Spanish-American baroque and is similar to that of San José Cathedral. It has sixteen vaulted niches, each but the lowest two containing a saint or a friar. These include the Virgin Mary, San Diego de Alcalá, San Antonio de Padua, San Juan Capistrano, Santa Clara, Santiago, and Santa Isabel from Hungary. At the entrance of the monastery there are some murals, in which there can be seen the images of some Franciscans friars with a skeleton. Its bell and clock towers from the 17th and 19th centuries remain in ruins.
Image by ZackClark on Wikimedia under Creative Commons License.
Sight description based on wikipedia
7

The Jade Museum offers authentic Guatemalan jewelry. Conveniently situated in the city centre, the museum presents a great look at Mayan culture and Jade material that was used for centuries to decorate bodies, carpets, religious artifacts, homes, and churches.

Santo Domingo is the biggest and richest monastery in Antigua. The museum was founded in 1542, or the same year as the city was established. Construction began with the set of impressive monuments, including a large church (completed in 1666). The museum is full of colonial and contemporary art, archeology artifacts, handicrafts, and even a pharmacological museum.
Image by marinakvillatoro on Flickr under Creative Commons License.
9

9) Convent of the Capuchins (must see)

One of the finest examples of an 18th-century convent in Guatemala, the Iglesia y Convento de las Capuchinas was consecrated in 1736; in fact, it was the last convent to be built in the city, and the first one that stopped asking for a donation to the new nuns, allowing then poor ladies to embrace religious life. Daily routine for the nuns was ruled by strict regulations, however, which included, for some, maximum discipline on poverty, penance and fasting (for instance, drinking chocolate was strictly forbidden); also, the requirement that they should survive on the tithing only.

Like the rest of the city, the building complex suffered damage during the 1751 and 1773 earthquakes, respectively, and was abandoned by order of the Captain-General at the time. Today, the monastery's well-preserved cells, gardens, and courtyards are open for public viewing and provide excellent photo-ops. Each twist and turn presents a view your camera will ache to capture! It's also interesting to see how small the cloisters were, and how the nuns lived during colonial times.

Tip:
The only guide is the map in the first room, so study it carefully! Don't miss the round room beneath the Nun's tower: sing quietly and be rewarded – the acoustics are incredible. The 2nd-floor art display is new and very nice, as well.
Image by miguel lara on Wikimedia under Creative Commons License.

Shopping is arguably Antigua’s most popular activity. Tourists find themselves spoiled for choice with a terrific collection of souvenirs, textiles, hand-made articles, cigars, and local Jade jewelry. Prices are usually very affordable, so it will be a shame not to hunt for something special to bring home.

Antigua features a variety of attractive clubs, fabulous discos, and cozy bars, making it the self-designated "capital of Guatemala's nightlife." The city's nightlife starts at 10 PM and offers a terrific selection of venues to enjoy a great night out.