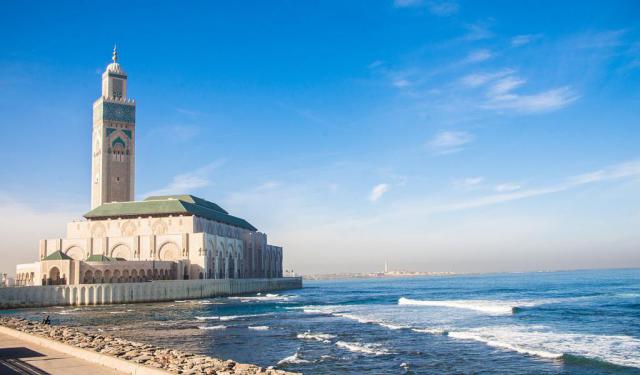 Image by Mehmet Al on Wikimedia under Creative Commons License.

Famous around the world for the legendary movie starring Humphrey Bogart and Ingrid Bergman, the city of Casablanca has a lot to offer visitors in terms of attractions. One of, if not “the” prime tourist destination of Morocco, it hosts a variety of historic and other notable sights. To find out what they are, follow in the footsteps of this orientation walk.
How it works: Download the app "GPSmyCity: Walks in 1K+ Cities" from iTunes App Store or Google Play to your mobile phone or tablet. The app turns your mobile device into a personal tour guide and its built-in GPS navigation functions guide you from one tour stop to next. The app works offline, so no data plan is needed when traveling abroad.

The Hassan II Mosque is the largest mosque in Africa, and the 5th largest in the world. Its minaret is the world's tallest at 210 m. Completed in 1993, it was designed by Michel Pinseau and built by Bouygues. The minaret is 60 stories high topped by a laser, the light from which is directed towards Mecca. The mosque stands on a promontory looking out to the Atlantic Ocean; worshippers can pray over the sea but there is no glass floor looking into the sea. The walls are of hand-crafted marble and the roof is retractable. A maximum of 105,000 worshippers can gather together for prayer: 25,000 inside the mosque hall and another 80,000 on the mosque's outside ground.

The mosque displays strong Moorish influence and the architecture of the building is similar to that of the Alhambra and the Great Mosque of Cordoba in Spain. This and the old Tin Mal Mosque are the only mosques in Morocco that are open to non-Muslim visitors. Anyone is welcome to buy a ticket to view the interior on hour-long guided tours departing several times daily. Work on the mosque was commenced on 12 July 1986 and was intended to be completed for the 60th birthday of the former Moroccan king, Hassan II, in 1989. However, the building was not inaugurated until 30 August 1993. During the most intense period of construction, 1400 men worked during the day and another 1100 during the night. 10,000 artists and craftsmen participated in the construction.

Why You Should Visit:
You can take some amazing pictures here. Beautiful title work and a wonderful view of the Atlantic Ocean. There is no charge to stroll around and see up close.


Image by S. Youness on Wikimedia under Creative Commons License.
Sight description based on wikipedia
2

Walk along Rue Chakab Arsalane to find another local place of worship - the Chleuh Mosque. Located in Old Medina's labyrinth – one of the oldest and most authentic areas of Casablanca, the Cheluh Mosque is a beautiful building with a specific architecture. It is the city's main Friday Mosque and is named after the Chleuh people, a Berber ethnic group.
Image by Alexandre Moreau Photography on Flickr under Creative Commons License.
3

Old Medina is that old part of the city that any Arab city features. Replete with narrow paths and strange twists, magically filled with delicious aromas, covered women and indistinct chatter, the Old Medina of Casablanca will also offer a great shopping experience. The street market in this part of the city starts and ends everywhere, on every corner. You will find various stores filled with fruits and vegetables, furniture and antiques, souvenirs and gifts, clothing and accessories. It is also the area where you can notice specific Arab-Mussulman (Muslim) architecture.

Why You Should Visit:
Great things to see and buy at reasonable prices (good for bargaining), and you'll also get to be near the old forts and city walls as you wind your way through the narrow alleys.

Tip:
The people that live and work in the Medina sometimes do not like your presence, especially when taking photos of their homes or their businesses. Ask for permission first!
If you're looking for items that are a bit more upscale, try the Nouvelle (New) Medina in the quartier of Habous. Be warned, however, that prices will be more upscale, too.
Image by Maher27777 on Wikimedia under Creative Commons License.
4

Casablanca's central market will offer any visitor a great fish & seafood experience. Besides being a place where you can feel the city's authentic and natural flair, it is also a spot where you can shop for local delicacies such as fruits, vegetables, and rare spices. It is always busy with locals, which is always a good sign. You should be able to purchase whatever looks good to you quite easily using elementary French and various gestures, as English is not widely spoken in Casablanca.

Tip:
It closes around 5pm so don't consider this place for dinner.
If you want some nice fresh fruit with your meal, buy some and give to the restaurant – they will wash the fruit and arrange them for you in a plate.
Image by Jc wik m001 on Wikimedia under Creative Commons License.
5

Situated in the core of Casablanca and surrounded by stunning architecture, this square is among the symbols of the French reconstruction era and is one of the city's most crowded. Pay attention to the Post Office building, the Palace of Justice, the Prefecture, the French Consulate and the Bank of Morocco. The majority of the buildings around are designed in Mauresque and Art-deco styles. All in all, a good place to soak up a little of the local color and it looks magnificent at night when lit.

Tip:
Never try to take a picture without one's consent in Morocco! And if they ask for tips for pics, try to negotiate.
Image by Remi Jouan on Wikimedia under Creative Commons License.
6

Casablanca Cathedral (French: Église du Sacré-Cœur de Casablanca), or Church of the Sacred Heart is a former Roman Catholic church constructed in 1930. The cathedral ceased its religious function in 1956, after the independence of Morocco. It subsequently became a cultural centre which is open to visitors. The church was designed by French architect Paul Tournon, using the Neo-Gothic style.

Why You Should Visit:
Neo-Gothic meets Art Deco meets Mosque... influences from all three show up in this marvel!

Note:
Currently undergoing renovation, it is supposed to be an exhibition hall when it opens again.
Image by Remi Jouan on Wikimedia under Creative Commons License.
Sight description based on wikipedia
7

After enjoying the Cathédrale du Sacré-Cœur, turn to the Parc de la Ligue Arabe, located close-by. It is the largest green area in Casablanca, established there in 1918. The park consists of alleys of long palm trees and is the best place for a relaxing, romantic walk. It also offers a variety of cafés, a refreshment cottage, playgrounds, and public toilets.
Image by ulayiti on Wikimedia under Creative Commons License.

Casablanca has always been the economic centre of Morocco as well as a hub of great cultural significance. After being a colony under French rule for a long time, Casablanca managed to assimilate and mix different cultures in various ways. Discover Casablanca's cultural heritage by following the steps of the next walking tour.