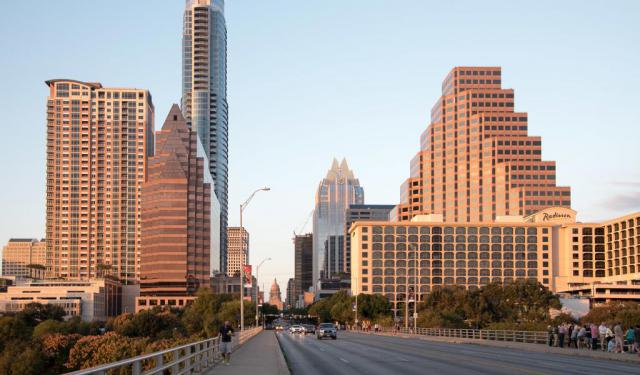 Image by David Berkowitz on Flickr under Creative Commons License.

Congress Avenue is the main street in Austin and historically the first one. Since the city's establishment, the street has grown and developed and now bears the mark of Austin’s historical and cultural evolution from the 19th century to today. From the State Capitol grounds to Lady Bird Lake, modern skyscrapers stand next to old two and three story buildings, making for an interesting walk.
How it works: Download the app "GPSmyCity: Walks in 1K+ Cities" from iTunes App Store or Google Play to your mobile phone or tablet. The app turns your mobile device into a personal tour guide and its built-in GPS navigation functions guide you from one tour stop to next. The app works offline, so no data plan is needed when traveling abroad.

The Texas State Capitol is located in Austin and is the fourth building to be the house of Texas state government in Austin. It houses the chambers of the Texas Legislature and the office of the governor of Texas. It was originally designed in 1881 by architect Elijah E. Myers, and was constructed from 1882 to 1888 under the direction of civil engineer Reuben Lindsay Walker. A $75 million underground extension was completed in 1993. The building was added to the National Register of Historic Places in 1970 and recognized as a National Historic Landmark in 1986. The Texas State Capitol building is 308 ft (94 m) tall.

The capitol rotunda features portraits of every person who has served as president of the Republic of Texas or governor of the State of Texas. The south foyer features sculptures of Sam Houston and Stephen F. Austin made by Elisabeth Ney. The rotunda is also a whispering gallery. The capitol has 360,000 square feet (33,000 square meters) of floor space, more than any other state capitol building, and is on 2.25 acres of land. The building has nearly four hundred rooms and more than nine hundred windows.

Image by RJ Bejil on Flickr under Creative Commons License.
Sight description based on wikipedia
2

The Lundberg Bakery, also known as the Old Bakery and Emporium, is a historic bakery building currently serving as a gift shop in downtown Austin, Texas. The building was completed in 1876 and is located at 1006 Congress Avenue. At the time the bakery began operations, bread was not sold wrapped or packaged. People would wait in line with cloth lined baskets to place the bread in after buying it.

The building served as a bakery until its owner, Swedish immigrant Charles Lundberg, died in 1895. It changed hands frequently until being bought and refurbished by the Austin Heritage Society in 1962. It was threatened with demolition in 1970, when a new building was planned for the Texas Department of Transportation, but saved when excavations next door uncovered the foundations of the previous state capitol building. Following the discovery, the foundations were converted to a historical plaza, and the bakery was saved.

The building is constructed of limestone with a brick facade, and features a large cast-iron eagle at the peak of the gabled roof overlooking Congress Avenue. It was added to the National Register of Historic Places on December 17, 1969.

Image by Larry D. Moore on Wikimedia under Creative Commons License.
Sight description based on wikipedia
3

The Jacob Lamour Block is a row of two-story commercial buildings designed and built by architect Jacob Lamour in 1876, who also designed other personal and administrative buildings in Austin. The facades bear Italian features, each distinctive, yet style-friendly to its neighbors. The buildings are still used as commercial spaces for stores and cafes.
Image by Kyle Jameson on Flickr under Creative Commons License.
4

The Walter Tips Building is the most beautiful building on Congress Avenue. Built in 1876, it is one of several buildings constructed by J.N. Preston for the Tips Foundry & Machine Company. The second and third floor facades bear prominent Venetian Gothic features, with a row of five richly decorated windows and banded pilasters. Nowadays, the building is still used as a commercial space.
Image by Mister-E on Flickr under Creative Commons License.
5

The Paramount Theatre is a live theatre venue/movie theatre located in downtown Austin. The classical revival style structure was built in 1915. The building was listed in the National Register of Historic Places on June 23, 1976.

In the Paramount's 90-year history, it has played host to a wide variety of acts ranging from vaudeville legends The Marx Brothers, to the premieres of such films as 1966's Batman and 2005's Sin City.

For over 90 years, The Paramount Theatre has been home to vaudeville, silent movies and "talkies," music, dance, and Broadway shows. Through the years, a cast of superstars has graced its stage; from Houdini, the Marx Brothers, Helen Hayes, Orson Welles, Sarah Bernhardt, the Ziegfeld Follies, the Metropolitan Opera, Lillian Russell, and George M. Cohan to such modern-day favorites as Billy Joel, Willie Nelson, Jerry Jeff Walker, Sarah Vaughan, and Mandy Patinkin.

One American Center is a skyscraper in Downtown Austin. Standing 394 feet (120 meters) tall and containing 32 floors, it is currently the 8th tallest building in Austin. It was the tallest building in Austin until the finishing of the Frost Bank Tower in 2003. However with the current building boom in Austin, there are many structures planned and completed which are and will be taller than the One American Center, starting with the 360 Condominiums, The Ashton, The Austonian, The W Austin Hotel and Residences, and the Spring Condominiums.

The Littlefield Building is one of the most elegant office buildings in downtown Austin. Built in 1910, this nine-story Beaux Arts building was designed for commercial and residential use. Initially conceived as an eight-story building, a ninth floor was added to exceed the height of the nearby Scarborough Building, making it the tallest until 1929. The upper floor used to contain an enclosed garden.
Image by rmattson on Flickr under Creative Commons License.
8

The Scarborough Building highly resembles early Chicago skyscrapers. Built in 1910, it was the first steel and concrete building in Austin. The first two floors were intended for fine shops and the rest for office spaces. The name comes from the popular department store, Scarborough’s, which was located in the building. The interior is decorated in Italian marble, as well as the lobby's main stairway.
Image by LoneStarMike on Wikimedia under Creative Commons License.
9

The Robinson-Rosner Building is Congress Avenue’s oldest standing building. Built in 1856 out of limestone and brick, bearing Gothic Revival features, it was a commercial building containing a bakery and a dry goods store. “Robinson-Rosner” is engraved on its facade. The original iron columns have been restored in recent years.
Image by LoneStarMike on Wikimedia under Creative Commons License.
10

The two-story Koppel Building, built in 1888, was designed by B. McDonald for Prussian immigrant, William Radam. It has survived without substantial renovations since its construction. The building has served as a hotel, a store and even a brothel.
Image by msquirrell on Flickr under Creative Commons License.
11

The Austonian is a residential skyscraper in Downtown Austin. At 683 feet (208 m) tall with 56 floors, the building is the tallest in Austin, overtaking the 360 Condominiums. The tower is also the tallest all-residential building in the state of Texas and Texas' tallest building outside of Houston or Dallas. The 53rd floor was taller than the previous tallest, 360 Condominiums.The building opened in June 2010.

The Austonian opened to host the 2010 Women's Symphony League Designer Showhouse the weekend of May 15–16, 2010. The Showhouse was the last opportunity for the public to see the property before residents began moving in the building in June 2010. The Austonian received a Four Star rating from Austin Energy Green Building in November 2010, making it the only residential high rise building in downtown Austin to receive such a rating.

One Congress Plaza is a skyscraper in Downtown Austin. Standing 390 feet (119 meters) tall and containing 30 floors, standing as the eighth tallest building in Austin. One famous feature of the building has been its sunken plaza, which includes trees and park benches, as well as the location for the AMOA Art Show.

Built in 1987, the building was one of the skyscrapers built during the 70s and 80s boom Austin had at the time, and still is one of Austin's most famous buildings. Norwest Plaza, and Franklin Federal Plaza have been other names for One Congress Plaza.