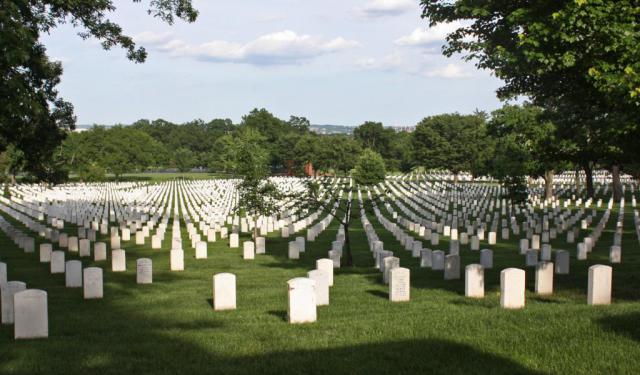 Image by Logan Ingalls on Wikimedia under Creative Commons License.

If you are looking for getaway spots from the hustle and bustle of politics and city life, this walking tour in Washington D.C. offers plenty of opportunities for that. There are many large parks and gorgeous gardens where you can admire beautiful flowers, landscape and even learn various historical facts.
How it works: Download the app "GPSmyCity: Walks in 1K+ Cities" from iTunes App Store or Google Play to your mobile phone or tablet. The app turns your mobile device into a personal tour guide and its built-in GPS navigation functions guide you from one tour stop to next. The app works offline, so no data plan is needed when traveling abroad.

This urban oasis was founded in 1873 and serves as a memorial with a statue of General John Aaron Rawlins, advisor to General Ulysses S. Grant. Rawlins Park has been included in the National Register of Historic Places since 1977. You can find a pretty big statue of General John A. Rawlins in the Rawlins Park. The statue is a contributing monument to the Civil War
Image by AgnosticPreachersKid on Wikimedia under Creative Commons License.
Sight description based on wikipedia
2

Constitution Gardens is a calm place to take a quiet walk in the middle of a very busy and noisy city. Part of the area that is now the gardens used to be under the Potomac River. The Army Corps of Engineers dredged a portion of the river and the material became part of the land that is now the gardens. During World War I the Navy used this land to build temporary buildings for offices and munitions storage. These “temporary” buildings were destroyed by orders of President Nixon in 1970. In 1976 Constitution Gardens were dedicated. This area is now part of the National Park Service.

It is a great place to take kids on vacation that have seen one too many museums or places that they have had to be quiet. The 50 acre garden has a man made lake with an island in the middle which can be reached by a wooden foot bridge. On the island is a memorial made of stones that have the names and signatures of the 56 men who signed the Declaration of Independence. It is a great way to have a history lesson and a picnic at the same time.

During cherry blossom season the park is spectacular, although almost any day is a good day to visit the park and enjoy the area. The gardens are open 24 hours a day and park rangers may be found at the Vietnam Veterans Memorial to answer any questions. As always, parking around the area can be a problem. You may want to use public transportation or the Tourmobile to get to the area.

Image by NCinDC on Wikimedia under Creative Commons License.
Sight description based on wikipedia
3

Lafayette Park is a little seven acre park that is part of the larger President’s Park. At one time they were all connected together. The land was all a portion of the property on which the White House was built. This entire area was part of the grounds at the disposal of the President and family to use for recreation. In 1804 President Thomas Jefferson extended Pennsylvania Avenue which bisected the park area. The portion of the park that is directly north of the White House was renamed Lafayette Park in 1824. It is named in honor of the Marquis de Lafayette who was from France. He served with distinction in the continental army under the command of George Washington.

President’s Park includes the land around the White House with its famous gardens including the South Lawn and the North Lawn, the White House Visitor’s Center, the Ellipse, Lafayette and Sherman Parks and the 1st Division Monument. It is part of the National Parks System and has been since 1933. The Ellipse is just south of the fenced property of the White House and encompasses 52 acres. During World War II this area was used to build temporary barracks.

Stop by the White House Visitors Center and grab a map for the two trails that are in President’s Park. The trails wander past memorials and statues, plus there are stunning views of the White House. Entrance to the park and the guide are free.

Image by Ken Thomas on Wikimedia under Creative Commons License.
Sight description based on wikipedia
4

The Enid A. Haupt Garden was opened in 1987 and is part of the Smithsonian gardens. It covers 4 ½ acres of rooftop over the Ripley Center, Sackler Gallery, and the National Museum of African Art. Because the garden is at ground level, most people do not realize they are walking on rooftops. It is an amazing use of space.

The Renwick gates are located at the Independence Avenue entrance. The pillars are made from the same sandstone as the Smithsonian Institution Castle and in fact the entire gate is fashioned to repeat the Castle’s theme.

The garden has a brick path that is perfect for taking a leisurely stroll. The Parterre is a colorful, very formal portion of the garden and not to be missed. The plantings are changed periodically so even frequent visitors will enjoy return visits. Lush hanging baskets hung from lamp posts and ornate iron work to make the area magical and breathtaking.

Benches are scattered liberally around so weary feet can take a break and let visitors just drink in the beauty. The Moongate Garden is a nod to the Temple of Heaven in Bejing. The cooling water feature can help take the heat out of a warm Washington day. The Fountain Garden also makes good use of water and is fashioned after the court of a Moorish Palace.

There are a few rules to be observed, no pets are allowed, only service animals. Picnics are allowed at designated seating areas, but not in the grass. The garden is open from dawn to dusk every day and admission is free.
Image by cliff1066™ on Flickr under Creative Commons License.
5

The United States Botanic Garden (USBG) is a botanic garden on the grounds of the U.S. Capitol in Washington, D.C., near Garfield Circle. The Botanic Garden is supervised by Congress through the Architect of the Capitol, who is responsible for maintaining the grounds of the U.S. Capitol. The USBG is open every day of the year, including federal holidays. It is the oldest continually operating botanic garden in the United States. The USBG proper consists of three locations: the Conservatory, Bartholdi Park, and the Production Facility. The historic Lord & Burnham greenhouse, built by the Architect of the Capitol in 1933, contains eight garden rooms under glass, totaling 28,944 square feet of growing space. In 2001, the Conservatory re-opened after a four-year renovation that required it to be completely dismantled and rebuilt using 21st-century building standards.

Why You Should Visit:
It's less about seeing how plants grow than making use of the benches, tables, and chairs that the park has to offer – not to mention wonderful views of the Capitol.

Tip:
If you're packing a lunch for your DC tour, be sure to eat it here.
Come during Christmas, too! The trains and mini wooden versions of world landmarks are worth the extra crowds.

Bartholdi Park is a small garden area that is meant to show what home gardeners can do with a little inspiration. The center piece is the Bartholdi Fountain. It was created by Frederic Bartholdi for the 1876 International Centennial Exhibition in Philadelphia. If the name sounds familiar, it is because he also created the Statue of Liberty. Sculptor Bartholdi presented the fountain on America’s 100th birthday since the Lady Liberty was not completed yet. After the centennial was over, the fountain was purchased by the US government and brought to Washington to be displayed.

Electric lights illuminate the fountain at night. These were originally gas but were changed to electric in 1915. In 1932 the fountain finally got a permanent home and a beautiful small park was built around it to complement its classic style.

Bartholdi Park features three distinct sections to mirror the symmetry of the three sections of the fountain. There are several demonstration gardens with different themes such as a rock garden and a romantic garden to serve as reminders that you don’t need acres of space to make a lovely grouping of plantings.

While this park is beautiful at anytime, it is awesome at dusk when the lights illuminate the 30 foot tall fountain. The park is free and open to the public.
Image by Ken Lund on Flickr under Creative Commons License.

Georgetown is an area located in the northwest quadrant of Washington, D.C., along the Potomac River waterfront. Despite its proximity to downtown Washington, this former port has preserved its own distinct character. Many of the buildings along the tree-lined streets are over 200 years old. Take this walking tour to reveal all the secrets of Georgetown.